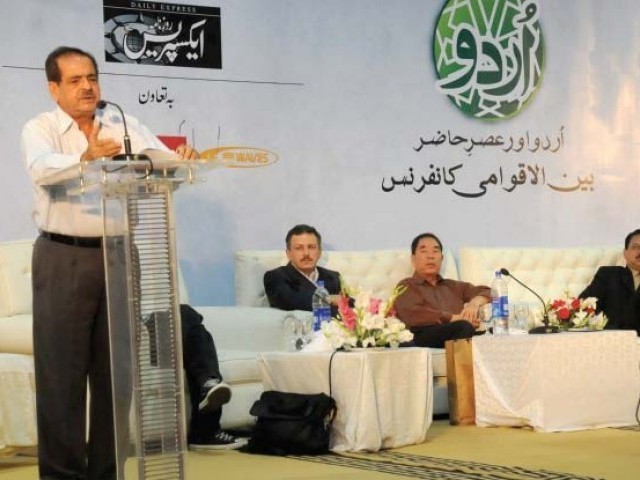 Poets, writers and academics gathered at the Expo centre for the second round of the Urdu conference. PHOTO: EXPRESS

It was during a break like this that I landed in Karachi. The Express Media Group had organised a two-day international Urdu conference. And it was truly international for it featured not only Pakistanis and Indians and the Pakistani and Indian Diaspora from Canada, Dubai, Doha and London but also delegates from Turkey and Iran.

Of course there were moments when you missed some people and wondered why they were not there. One such occasion was during the ‘gender session’. Jilani Bano was presiding over the sitting and Zahida Hina read her thesis on women writers’ contribution to Urdu literature. It was an orderly paper and rather methodically documented women poets and fiction writers. But these being times of confrontation, that obviously is not considered enough. For a session devoted to gender issues to be seen as a success there needs to be a proper riot. But Hina read her paper and one heard no gender slogans raised. That was when I missed Fehmida Riaz; and Kishwar Nahid; and Fatima Hussain; and Zahra Nigah. Actually, I was wrong about Zahra Nigah for she is not combative by temperament. She would have made no difference.

The slack was taken up by two men, Saleem Akhtar and Zuber Rizvi. Actually, Akhtar just read his paper. The combative argument was left entirely to Rizvi. The latter really amazed me with the tenor of his speech, his exotic arguments and how he seemed to be targeting people in Delhi while speaking in Karachi.

Then there was the session on world literature and contemporary imperatives that should have seen a hot debate. Long gone are the days when Urdu writers were content with reading world literature. The longing for a place in world literature has spurred so many Urdu writers to have their works translated into English. Even the fear of getting lost in translation has not been an effective deterrent.

At least one of the papers read in this session, the one by Shamim Hanfi, merited some debate. One reason most of the papers read at our seminars do not get properly debated is that the seminar participants are caught by surprise. The convention is for the seminar participants to be given copies of the papers. That way, the author does not even have to read the entire paper at the session. I myself realised rather late that at least two things Hanfi said did not sink in immediately.

One of these was his reference to a Faraq Gorakhpuri declaration that the entire Asian literature was insignificant in comparison to the European literature since the Renaissance. No sir, I cannot subscribe to that.

The other significant statement he made was on expression of regret that Kaifi Azmi had been crowned by the Indian authorities as the poet of the millennium ahead of greats like Amir Khusro. I join him in his expression of shock and regret.