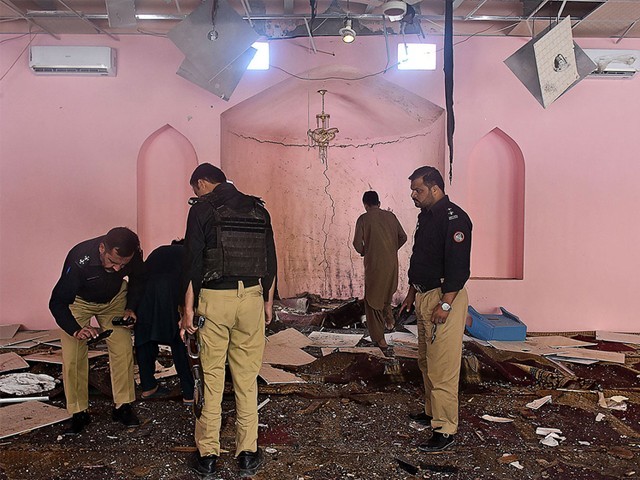 Pakistani police officials examine the interior of a mosque after a blast on the outskirts of Quetta on May 24, 2019. PHOTO: AFP

Balochistan is once again in the grip of deadly violence. At least three people, including a prayer leader, were killed and 28 wounded in a remotely-controlled explosion inside a mosque an hour before Friday prayers. No one has claimed responsibility for the killings.

According to security sources, the target was a religious cleric, while the bombing itself was a result of Taliban infighting. However, this information has not been independently confirmed. Given the nature of the attack, however, it is apparent this is the work of a religious fanatic group.

Pashtoonabad is located on the outskirts of Quetta and is predominantly populated by Afghan immigrants and refugees. The town has witnessed many deadly attacks in the past, while policemen have frequently become the victims in such attacks.

However, despite the sharp rise in attacks over the past several months and the high possibility of more deadly attacks in the same neighbourhood, Balochistan’s leadership did not make any effort to ensure the safety and security of common people. A former spokesperson for the Balochistan government in a private meeting had admitted that the government is not even capable of installing security cameras, a long awaited development of a larger project called Quetta Safe City.

I don’t know anyone in Quetta who has not lost a loved one in this ongoing violence, which began in 2000. After every single deadly attack, our political and security leadership blamed ‘hostile agencies’ – especially India and Afghanistan – for being behind the terrorist attacks. Now they have added Iran to this list as well. Balochistan’s leadership is always happy to share information when they claim India, Afghanistan, Iran, America and other countries are active in terror activities in Balochistan, a strategically important region.

In 2012, a former inspector general of the Frontier Corps (FC), a paramilitary group primarily responsible for maintaining border security but also given additional responsibility in 2004 to maintain security inside the province, told a group of senior journalists in a private meeting that “20 foreign agencies are active in Balochistan”.  This was an eye opener for many senior journalists back then, but I am yet to witness any action that ensures the safety and security of innocent citizens after such a shocking revelation. Most of the victims of attacks have been poor citizens who ended up being caught in bombings and shootings, while we did nothing.

It is not difficult to ensure the safety and security of a city like Quetta, which is not only small but is also a valley surrounded by mountains. Honestly, people have stopped having any expectations from the ‘political leadership’ of Balochistan, because most of them were elected in a suspicious manner which makes it difficult to pin any hopes on them. I was not even surprised when current Chief Minister of Balochistan Jam Kamal blamed all previous governments for poverty, corruption and violence in a province where his father and grandfather were the chief ministers for years and enjoyed the associated perks and privileges. He knows no one cares about Balochistan and no one is going to hold him accountable even as he goes around giving absurd and inaccurate statements.

It is easy to understand Balochistan’s dirty politics by looking at the past General Elections. A few Baloch political elite would form a ‘political party’ months ahead of the elections and then would get a majority in Balochistan’s Legislative Assembly. They knew very well that no one took them seriously or believed their words about Balochistan’s issues and grievances. Since the formation of Pakistan, elite Baloch politicians share equal blame for the violence, killings and poverty that have plagued the region. The province has faced serious problems for decades, and what is most apparent is its lack of leadership to navigate it out of this crisis.

Baloch politicians, however, have no role to play in resolving the conflict, and only have to spend their time looting and plundering resources. Since accountability of politicians is practically non-existent in Balochistan, especially in times of war and conflict, they easily manage to get away with this. In an ideal world, political leadership plays a very active role in bringing peace and saving innocent lives. But ours is not an ideal world.

Pakistan is on the international terror watch list and many countries believe there are safe havens for terrorists, especially in Quetta. Some people might believe in the government’s narrative that it is impossible to secure the entire Quetta valley given the involvement of powerful hostile agencies, but a sane person would not buy this narrative. How can a government or its security agency be completely incapable when it comes to installing security cameras? How can a government not have a forensic department in the region, even after thousands of bombings and deaths? Why do we not have in-depth news coverage after bombings in Balochistan? Many top police officers who had executed or arrested members of religious fanatic groups or the Taliban were brutally murdered on the streets of Quetta. What does this mean for justice in our country?

Such attacks of a religious nature can be controlled by not only improving security but also improving the process of investigation, which I do not see happening in the near future. A senior police officer stated in 2014 that over 80% of people involved in terror activities were acquitted because there wasn’t sufficient evidence, neither did anyone want to testify against them. I strongly believe it all boils down to the immensely weak government and the even weaker law enforcement agencies in Quetta.

Meanwhile, the attacks that occurred in Gwadar were different in nature and intention, and these do not require improving security as a solution since people there have legitimate concerns over the distribution of their resources. An act of violence by any group or state should not be condoned or justified for any reason, but it is equally important to not ignore the legitimate and genuine grievances faced by the majority of people living in Balochistan over the unfair distribution of its resources. This issue needs serious debate, not just security action, which would undoubtedly make things worse.

Throughout history we have seen that violence and killing have not helped resolve political issues, but only made it worse. Yes, there is the possibility of foreign funding and foreign involvement in fuelling the Baloch separatist movement, but one cannot deny the fact that the Baloch insurgency is homegrown and people are not happy with the federation’s policies towards Balochistan. The tribal chieftains who have been ‘elected’ as chief ministers have never been and will never be able to resolve the conflict. The Balochistan conflict needs serious discourse and self-reflection; finger-pointing at India or other foreign agencies will only make things worse for us.