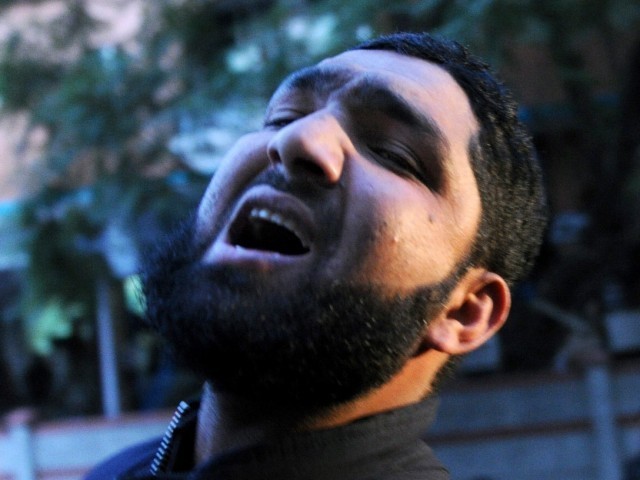 Qadri committed a heinous crime. There is no argument in his favor, except that he has young children. PHOTO: AFP / FILE

I consider what Mumtaz Qadri did to be a heinous crime and one of the most serious – murder, and that too motivated by ideological reasons.  The victim was the governor of Punjab who in furtherance of his public duty had met a woman convicted under the state’s discriminatory blasphemy laws.

Nevertheless, Qadri should not be executed as the death penalty must be opposed on all accounts. There should be a special onus on us to resist the temptation to punish someone for their ideology, however repugnant we may find that ideology. People must unequivocally reject the death penalty, especially as applied in Pakistan.  Liberals who say they are against the penalty, but then go on to assert that they would support it in Qadri’s case, as an exception, have no ground to stand on.

I believe Salmaan Taseer’s family may be justified in feeling that only death will avenge them, but  it is a fallacy to think all victims’ families want to see blood.  Amanda and Nick Wilcox, in the US, lost their daughter and maintained their once theoretical stance against the death penalty.  If the desire for revenge was so ingrained in our psyche, many countries would not have abolished the death penalty. If there is no option for the death penalty, people would modify their expectations, and gradually rid the state of its taste of choreographed murder – the dreadful march from courtroom to prison to the noose.

Also, there are no conclusive studies that show that death penalty is a deterrent in Pakistan. According to the HRCP’s report, Slow March to the Gallows (2008):

‘capital punishment in Pakistan is discriminatory and unjust, and allows for a high probability of miscarriages of justice.’

Twenty-seven different charges carry the death sentence including blasphemy, stripping a woman of her clothes in public, and sabotage of the railway system.  The capital punishment should, for the sake of argument, however, be reserved for the murder alone, and is arguably cruel, unusual, and grossly disproportionate punishment in these other cases.

The report further states that Pakistan’s Special Courts (like the ATC) are much less likely to assure a defendant’s right to a fair trial.  However, in a publicized case such as Qadri’s where the scene was shown on television and the defendant paraded before the camera right after the shootings – it is unlikely, but not impossible, that this provision was affected in such a way at least in confirming guilt.

Also, police corruption and intimidation of witnesses, that are common experiences in most murder cases and thus taint the prospect of a fair trial, do not appear applicable here.  But even in this case it may not be that he received a 100% fair trial.  This can only be verified by accurate accounts of what ensued at the Adiala jail before the ATC judge announced a two times death sentence behind closed doors –  whether Qadri was allowed access to his counsel, whether he was kept under humane detention conditions, allowed adequate rest and proper nutrition, whether he was allowed visitors.

Regardless, the death penalty should be abolished uniformly as it would make matters susceptible to unfairness, too complicated to handle for the courts, and too time consuming if it were allowed where the trial gave the semblance of fairness.

Another argument against the death penalty in Pakistan is that sentencing judges are not allowed much room to maneuver when handing the grimmest sentence.  A 2003 Supreme Court case limits their choice.  It holds that:

‘the normal penalty of death should be awarded and leniency in any case should not be shown, except where strong mitigating circumstances for lesser sentence could be gathered.’

This ruling violates the fundamental right to life and in fact should be its inverse – that the death sentence should be given only in the most serious aggravating circumstances, and should be applied sparingly.  A judge should ordinarily be giving life sentences that should be knocked down to anywhere between 7 and 20 years followed by close supervision.  Liberals who propose that the man rot in jail for life have only a theoretical and vague perception of liberty and incarceration.

Unfortunately, there are few mitigating circumstances in the case of Qadri.  He shot a man 25 times in an act of cowardice and betrayal.  His victim was the very man he was obligated to protect as a member of the elite security force.  He killed him for reasons that are nefarious – his association with a right winged ideology that finds its basis in extremism.  The victim was trying to do the conscientious thing in a public office – defending the rights of a minority Christian woman condemned to death in an unfair trial.  There is no argument in his favor, except that he has young children.

The fact that Qadri had a higher calling, and that many people have rallied behind his zeal, could not possibly be a mitigating factor.  Qadri is no Robin Hood.  In this tale, a man upholds the rights of the weak and the poor.  Qadri in contrast, though not affluent, would have the country uphold a law that in its application discriminates against the poor, the marginalized, and the people with the fewest political freedoms. It is mostly working class Christians who are unfairly targeted by the law. The blasphemy law gives legal cover for the peoples’ desire to punish to death any person for even their unintentional insult to their religious sensibilities, and is arguably not in line with the basic tenets of Islamic law. The accusation can be unsubstantiated and based on a false perception alone – it doesn’t matter. So Taseer, by putting himself behind Aasia Bibi was, in this one moment, betraying the trappings of his class, and actually siding with the weakest in society – something more politicians should do as meaningfully.

Hence, under the Supreme Court precedent, Mumtaz Qadri was sentenced to death, and there was little room for discretion or leniency.  But, Taseer was a proponent of human rights, and defending Qadri’s right to live is in line with those same principles.  This is the same reason Qadri should live.  Demanding his hanging would be to subscribe to the most degrading human politics and diminutive of our own dignity.

What makes issues worse is that Qisas and Diyat allow a victim’s family to pardon a killer in lieu of blood money.   In what HRCP terms a ‘privatization of justice,’ the rich and powerful are less likely to be satisfied with any amount of money; it is more likely that a death sentence will be carried out where the victim’s family is of a higher social status then the defendant’s. This flip-flop application of the law is discriminatory with terrible implications for poorer defendants and their families – and assures the rich and powerful (for eg Raymond Davis) an easy exit after they make a lump sum payment. These laws violate notions of human rights and prima facie discriminate on the basis of class and social status – and hence make the case against death penalty even stronger in Pakistan.

In 2008, there were 7,400 on death row in Pakistan. Clearly, case hardened Pakistani judges are not shy of meting out this most severe punishment.  Pakistan uses the inhumane form of execution – hanging, (although no mechanism of killing can ever be humane, not even the lethal injection.) The injection, perhaps, seems more civilized and twenty first century, and hangings are reminiscent of more barbaric times in England in the 1800s – but both are equally violent.

Troy Davis who was given the lethal injection on September 21 said:

“I’m not the one who personally killed your son, your father, your brother”.

In some sense, Qadri alone did and did not kill Taseer.

The state has been complicit in the systematic and sustained promotion of such right winged ideologies. Zia and his Islamization, Musharraf and his patronage of the MMA – and both regimes in their role in imperialist wars that have resulted in gross human rights violations – summary executions and disappearances and deprived people of fundamental freedoms.

If Illinois could declare a moratorium on the death penalty, so can we.  We have to stop framing the debate in terms of peoples’ lust for blood and frame it in humanitarian terms. The death penalty can never be carried out equitably where poor people accused of crimes that carry the death sentence can not ever be guaranteed adequate, let alone the best, counsel.

It is likely that we are allowing the state to murder people where prosecution has not met their burden in proving guilt beyond reasonable ground. It is possible that we are killing the innocent. And so Qadri must live, not because he is anyone’s hero – but because the death penalty in Pakistan is unjust and discriminatory, especially against the poor, and we should all stand for principles of human rights.