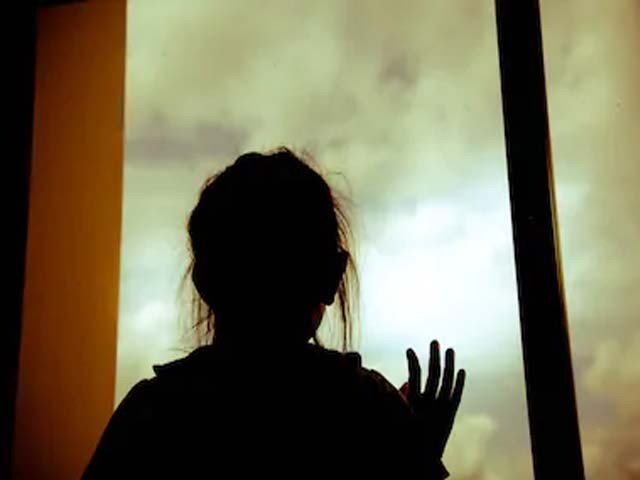 Samreena had been living there for a few months but still had not seen the entire house. PHOTO: SHUTTERSTOCK

Opening her eyes, she saw the boy backing off of her scared and watched as Rahim chacha held him from the scruff of his neck. Teeth grinding, he took his chappal off with one hand and started hitting the boy.

An hour later, Samreena sat in the front seat of Rahim chacha’s Suzuki. He hadn’t said a single word since he had beaten the boy senseless. Leaving him in the empty house, he had signaled Samreena to come with him. She had tried asking him where they were going but he remained quiet.

She gave up asking after a few attempts. She did not care that much anyways. For the first time during that year, she did not feel scared with him. Ignoring her completely, he lit a cigarette. Samreena noticed his clothes were sweaty. He had been on the run from the police.

The Suzuki stopped outside her basti.

(Get off now! Run straight to your mother. I am waiting here till you reach your house.)

Samreena jumped out feeling relieved, even elated. As she passed his side of the car, he grabbed her arm suddenly, making her squeal in surprise.

(Listen! Tell you mother I’ll be coming back after a few days. And you… will stay at home till then. Don’t go outside anywhere or else I’ll break your legs)

His deep disturbing eyes bored into hers, looking for an affirmation. Gulping with fear, Samreena nodded fervently. She ran away as fast as she could towards her house.

With every passing day, Samreena became sure and sure that Rahim was not coming back. She had tried many times to talk to her mother about her time away; last night in particular but seemed to have no time for Samreena.

She had strange men visiting at night many times a week now. She would make Samreena take her baby brother and leave the house during their ‘visits’. There was something about those men that made Samreena extremely uncomfortable but her mother seemed almost radiant. Perhaps it was because they were eating regular meals now.

Finally, the day that she had dreaded for so long had arrived. She returned from filling up water buckets from the nearby filtration plant and found Rahim sitting inside their house, puffing out cigarette smoke and talking to her mother in hushed tones.

Scared, Samreena came outside and wondered what was it about this time? She knew it would be some sort of work prospect for her and that her mother would send her away in the blink of an eye for yet another rather thin wad of cash.

“Main wapis signal pe nahi jaungi maangnay!” She thought to herself and went back in.

(I will not go beg at the signal again.)

(It’s a house! In fact it’s a huge bungalow. She can earn good money and work load isn’t much too. But they will keep her for day and night and she would only be permitted to see you once in a month.)

She heard Rahim hoarse whispers. Her mother leaned in listening intently. After a few questions, her mother nodded in approval and thus her fate was sealed. She was going away to the big city, off to live in a big mansion. That’s what her mother told her trying to convince her.

(But mother, Rahim chacha scares me.)

It was a cold day in November when she had arrived at Asma baji’s place; an expansive house. The sheer size of the lawn baffled Samreena, where the young couple sat sipping tea and watching over their two-year-old lazing in a stroller.

In that moment, Samreena felt a stirring within her; a longing for familial comfort like that. Maybe all rich people live happily together in their big houses and spacious lawns, she had thought. The big house transformed at night though.

It became eerie and even bigger and she lost her way several times when returning to her sleeping quarters. Sometimes she would hear muffled sounds of laughter and music from the upper portion at odd times of the night. Sounds of shiny shoes stepping out of shiny cars parked in the vast driveway pierced the night air like a knife.

She was not the only hired help around the house. They had other duties while hers was to play with the baby and keep him occupied or sometimes help with organising Asma baji’s things.

Samreena had been living there for a few months but still had not seen the entire house. She had been told off quite sternly by Asma baji one day for wandering off to the forbidden side of the structure from where she thought she had heard other kids. For the fear of being handed back over to Rahim chacha, Samreena had complied. She hadn’t gone to see her mother even though Asma baji asked her twice.

‘Wo phir se Rahim chachay kay sath bhej degi mujhay,’ she thought. (She will send me with Rahim Chacha again.)

Her baby brother was the only thing she missed about her home. But visiting him meant going back to the slum that reeked of strange men and her mother’s cruel indifference.

She had gotten almost comfortable in the house by now. She ate good food and was even given milk and fruit two times a week. Her health had visibly improved and filled out the clothes given to her by Asma baji. She had also started noticing her reflection in different mirrors around the house and liked what she saw.

That gaunt little girl with empty eyes that stared at her from different car windshields had disappeared. Her complexion had brightened, eyes sparkled and cheeks turned pink. One day as she walked back to her sleeping quarters, she had sensed someone’s gaze on her but when she looked, it was only Ammar bhai, Asma baji’s husband, talking on his mobile phone. He had barely spoken two words to her in all her time there and was almost never home. Samreena had shrugged off the uneasy feeling and kept walking.

Settling down under the covers, Samreena had dreamt of spacious lawns and clear blue skies above her head. She had been gliding through a row of rose bushes planted in what was the lawn of her own beautiful house when something pierced her foot.

Flinching with pain, she sat down on the soft grass and saw a large thorn deeply embedded under her foot. She closed her eyes and attempted to pull it out but as usual fear got the better of her and she kept sitting there in pain, unable to get the thorn out. Suddenly, somebody yanked it out quickly and painlessly from under her foot and she felt no pain at all.

Almost laughing with relief, Samreena opened her eyes to look upon her savior and found Rahim chacha sitting in front of her. Grinning, he held up the thorn and looked into her eyes. Something terrible stirred in his eyes and he suddenly lunged towards her. The thorn in his hand grew bigger and bigger until it was the size of a sword.

Screaming, Samreena ran from him, her foot throbbing with pain, and Rahim chacha kept chasing her around with the sword-sized splinter. Samreena tripped on the grass and fell face down onto the soil.

The next part of the series will be published next Sunday. Stay tuned to see how the story unfolds.