The dream that could never be – part 1: She thought God had come for her 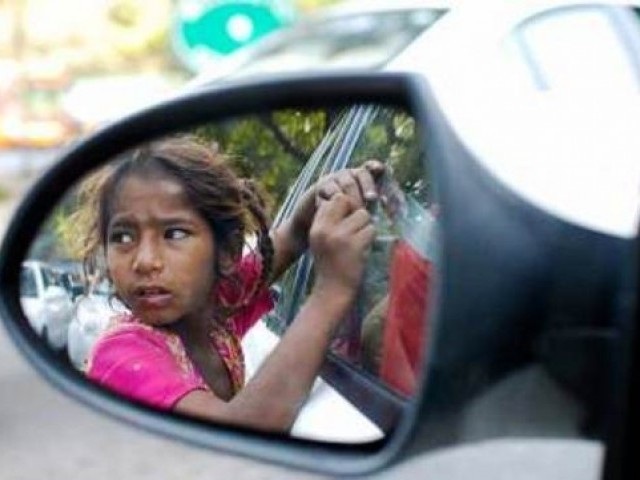 Before this she had been cleaning car windshields on traffic signals. PHOTO: FILE

O’ sweet mother, don’t send me away,
I am but so young; it is late in the day.
Dogs on the street shall pick me apart,
They’ll chew on my bones and tear out my heart.

Then he shall come to claim pieces of me,
My soul in tatters, my dreams and debris.
But his smile is what I fear the most,
His touch, his stench, his breath I loathe.

Just let me stay in your warm embrace,
Silent as death, I’ll quietly stay.
In your lap I’ll sleep a dreamless sleep,
No dogs, no wolves shall come to steal.
In your sweet grasp, I shall gladly stay,
Till it’s time to part with the visitor gray.

It was beautiful. More beautiful than anything she had ever set her eyes upon. Crimson and gold shone through the ages of grime which had settled on it.

(Such a beautiful thing can only be Asma baji’s! But why did she toss away this piece of gold in the trash?)

She stood in the old study examining the beauty of the brooch in bewilderment.

“Pehlay isko saaf karleti hun. Jab chamka kay baji ko dungi tou Asma baji khush hojaingi meray se!” (First I’ll clean it. When I shine it and give to Asma baji, she will be pleased with me!)

She sat down to clean the brooch, unperturbed by the dirty floor and roaming insects. It wasn’t until she heard Asma baji’s loud inquiries about the progress of her work that she got up and started cleaning the room; the work she had been sent upstairs to do.

Like any other 13-year-old, Samreena’s fascination with things apart from her work went quite deep. After finishing cleaning the room, she carefully wrapped the pin in her dupatta and went downstairs to surprise Asma baji. Her mistress was a woman in her 30s with a firm attitude and sharp tongue. Despite Asma’s acrimonious manner, Samreena liked working for her due to two things: the spacious lawn of her house where she played with Asma’s two-year-old son Salik, and the way the house always smelled of fresh flowers.

This was her first job in a proper home with food and a place to sleep. Before this she had been cleaning car windshields on traffic signals. Not cleaning, rather forcibly cleaning them even if the drivers shooed or honked her away. What they of course didn’t understand was that she did not like to drag that dirty rag and wiper across the windshields of their cars.

(Rahim uncle would stand at the corner of the junction. If I didn’t clean, how would I earn? I would only be thrashed more.)

She had hated Rahim chacha at first sight. The 40-year-old man stunk of smoke and unwashed hair. His grimy nails and broken toes gave his feet a wild appearance that scared her. His eyes were deep and full of secrets; of dark mines and unwashed alleys. Strenuous work had left his bones brittle and skin callous. He had come by their basti when she was eight-years-old, playing marbles behind her jhuggi (slum) with other kids.

Stopping at the entrance of her jhuggi, he stared at the playing children. Others seemed to not have noticed but since it was her home, Samreena had stopped playing to look back at him. His cold hard stare had chilled her to the bone. Tearing her gaze away from him, she returned to her game, hoping to make him vanish by not looking at him, just like a foolish fat pigeon closes its eyes hoping the predator will disappear. But only a few days later, she was sitting with about a dozen other kids in the back of a Suzuki with Rahim chacha in the front seat.

(If father was here he would never send me! Mother, I don’t want to go)

She had pleaded incessantly with her mother. Cradling her five-month-old brother in her arms, her mother had avoided looking at her and had continued counting the thin wad of cash that Rahim had given her.

Those were dark days. Rahim chacha had assigned her a signal far away from her slum, which meant she had to stay at his place with five other kids. Some nights her feet ached so much from running around all day that she went to sleep without any food. Initially, she had been scared beyond her wits about running after moving cars. She fell down too many times, losing the cash in her hands to older friskier children who had more experience. But soon, Rahim chacha’s frequent whippings taught her to hold on to the cash that she delivered to him at the end of the day.

She was allowed to see her mother only once in 10 days but no matter how much she begged, she was made to leave in the Suzuki every time. Samreena was a street kid for about a year before the terrible night raid took place. She and the other kids were used to the drills that Rahim chacha held every few days to prepare them in case the police found his den. That night, however, was not a drill.

Her deep, tired slumber had been abruptly broken by the loud banging of doors. Heart thumping loudly in her chest, she cowered against the wall hearing loud bangs with stuff being thrown around as the police raided the place. She had covered her ears and kept her eyes shut. She heard other children screaming, feet getting dragged and the crude, hoarse shouts of the policemen. With bated breath, she waited until the voices died down. Trembling, she opened her eyes a little and peeked around. In the door-less doorway stood a tall, scrawny boy. Samreena had often seen him sitting in Rahim’s old Suzuki.

“Bhaiya, police chali gai?” she asked, puzzled by his demeanour.

(Have the police left?)

Inching towards her slowly, he gave no sign of having heard her query.

An alarm went off inside her. Something was not right about his hungry gaze. Limbs poised like a cat ready to pounce; he seemed to have lost the ability to speak. But he didn’t need to. Samreena’s eyes darted all over the room looking for an escape route; none remained as she stood literally cornered in that windowless abandoned skeleton of a house.

She did what she had always done in fear: closing her eyes shut, praying for it to be over. Praying God would take her elsewhere. The boy had gotten close enough for her to be able to smell him now. She was no stranger to foul smells as she was raised on a pile of stink, but this was the whiff of a man turned animal. It reeked of filth, of voracious hunger, of fear of getting caught. Her breathing turned urgent and ragged as she groped back at the wall making more room for herself, distancing herself from him.

Suddenly, they heard footsteps approaching. God had come for her, she thought…

The next part of the series will be published next Sunday. Stay tuned to see how the story unfolds.