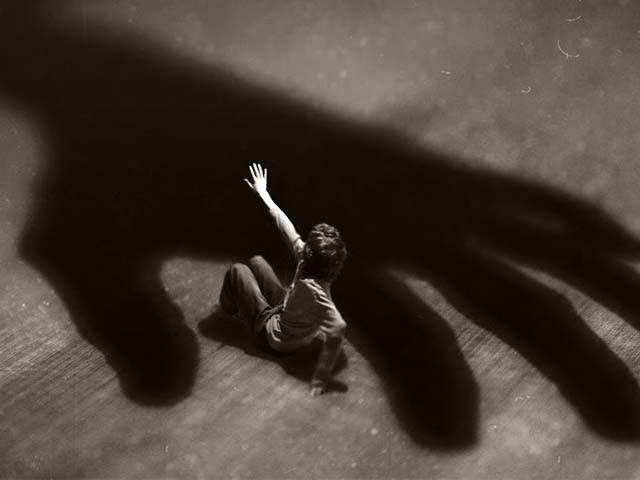 The boy had often escaped his reach, so he shone like a hunter having finally captured his trophy. PHOTO: PINTEREST

“Can you go out to get groceries?”

“Nai, nai. Don’t send him out at this time,” my mother responded.

“Okay, at least take the cook with you.”

“Please keep your phone on.”

I got into the car and drove into the night.

Driving in the night gave me a high. I loved how the headlights ate up a specific amount of the night. Just above the reach of the headlights was the darkness, pressing in from all sides. And that primal awe and fear of the darkness and what it did and did not contain was still there. After centuries, it returned in an instant. And seeing it return with such ease, despite the street lights and the city’s sounds and presence of bodies, was dizzying.

On closed traffic signals, he often looked straight at the darkness. Looking hard at what it may contain. Often he lowered his windows, to hear the darkness. Did it contain outlines of faces, incomplete conversations from the past? And sometimes, in the stretches with malfunctioning street lights, he closed his car’s headlights and drove slowly. All windows lowered. To feel the darkness. To sense and maybe trace its texture. Allowing it to enter, wash the entire car and his entire being with a big, broad swipe.

I reached the market, got out, and within five minutes I was back in the car. The key was in the ignition when I saw the yelp of a child. My windows were up so I heard no sound. The child was held in a strong, nonchalant headlock by the security guard at the market. One of the child’s hands was on the guard’s hand, just lying there. The other held two colouring books. He had sold one today. The books were moist around the edges, a result of the day’s work. There were creases across the face of the books. They were used for fanning, scratching, hitting the odd mosquito, and for selling. Sometimes though, the child looked at the pictures and told himself stories that replaced the foreign text.

It suddenly hit him that the boy must have been only 10-years-old. His heart suddenly pounded against his chest. The child continued to look at the ground. He didn’t look here and there at any passer-bys. The guard radioed something into his walkie-talkie and smiled a successful smile. His day’s work had been done. Teaching children like him a lesson was the most important part of his job description. Also, the boy had often escaped his reach, so he shone like a hunter having finally captured his trophy.

“It’s 11 already, and you have university tomorrow.”

I hung up. Annoyance? Anger? At being given love? At being wanted? I didn’t know.

I looked back at the child. The hair on the guard’s arm was now collecting sweat, which was brushing against the side of the child’s face. There was no phone call for him. No family to check up on him, nor was he expecting any guests the next day. There was no routine that he was deviating from, or any people present who would’ve been in a rush to hold someone accountable for this. No one to caress his shoulders where the guard was holding him. To wash and wipe the guard’s sweat from his face. To let him know that the world had wolves. Also, no state that was awake at this time or bothered about 10-year-olds in urban markets?

“They shouldn’t be out,” the state would have argued, “and if they are out this late, then what can we do?”

A local policeman was soon at the scene. Tonight’s entertainment, he must have thought, as he neared.

The child was absolutely still. The grip had been immensely effective in sapping any energy. Any emotion. The child’s resistance, if there was any, had diffused into the darkness that watched this scene. Did the darkness sigh and cry? He didn’t know because no sound escaped its dark cover. Neither did the darkness rise and fall to express any emotion. It stayed there. As it was. Watching. Doing what its best at.

But even with his eyes downcast and standing 25-feet away, I heard as his tears formed. The collection happened quickly but they flowed slowly. Down his face. Collecting some dust. Dirt. And mixing with the guard’s sweat along the way. It wasn’t a cold night. But I felt the warmth of each tear. ‘Why did it feel so close,’ I thought as I looked out at a blurred world.

The policeman picked up the boy and sat him on the middle of his bike. He sat down in front. The guard followed. Neatly sandwiching the child between their bodies. The guard let out a mischievous yelp as he moved his body closer. Inside the boy. I didn’t hear the yelp. My windows were up.

As they rode off, the policeman almost forgot to switch off his headlights. Excitement does that, he silently reassured himself.