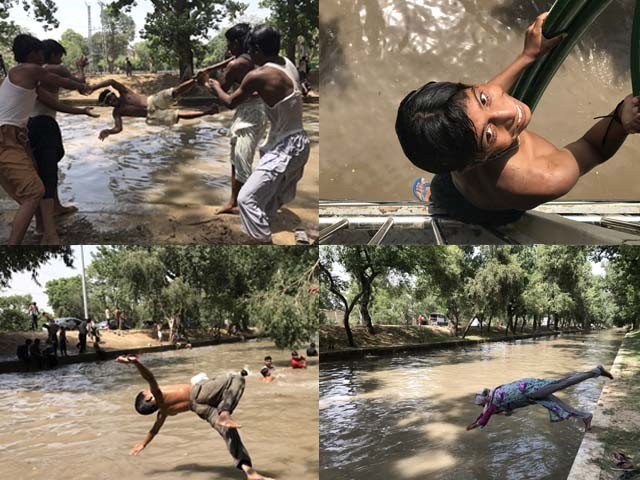 The experience reminded me of life in the village because it was pure, lovely and enjoyable. PHOTOS: FAIZAN AHMAD

Moving from a small town to the historic city of Lahore in 2013 was a great experience. Though still an immature boy, I was enchanted by the many attractions Lahore had to offer. One of those attractions which continues to fascinate me is the famous Lahore canal, which runs through the east of the city. The canal was built by the Mughals and was subsequently improved upon by the British. To this day, the canal continues to be a popular site for children and adults interested in cooling off during the summer heat. Every summer, some of my friends and I go to the canal to combat the hot weather. There you will find a lot of people, and even buffaloes, having a good time bathing in the water. The owners of these buffaloes take a bath, some women wash clothes nearby while others dip their legs in the water. One day, I decided to visit a section of the canal which is near the Hanjarwal stop. It was the first Sunday of Ramazan. There were dozens of people of all ages enjoying the cool breeze and the inviting waters. Boys in their pyjamas jumped from a bridge and were competing against each other in a diving contest. Some were jumping from small trees, probably afraid of jumping off the bridge because it seemed too high. About 100 metres away, a group of women and young girls were sitting on the bank with their legs dipped in the muddy water. It was an unspoken rule that a certain part of the canal was reserved for females. I folded up my trousers and put my legs in the water. Right in front of me, on the opposite side of the bank, a woman tied two charpoys to a tree, completely dipping them into the water. Her little daughter was sitting on one of the charpoys and was enjoying watching her mother who was busy washing clothes. By then, the sun was at its peak and sunshine started filtering through the trees. More and more boys were jumping into the water and splashing water out of the canal onto the dry mud. A group of boys was helping a younger boy jump into the water using the fish-style dive, but the boy was so afraid that he didn’t jump. Yet, he kept trying to muster the courage. The fish-dive was a common diving technique among them and only boys with experience appeared to adopt this practice. As my feet touched the cold water, I remembered the time when I used to go to the canal in my hometown with my friends, without my parent’s permission. We usually spent four to five hours there, got covered in mud and later stole watermelons from nearby fields. Often times, my grandmother found us, brought us home and then punished us. In many ways, Lahore’s canal provides the masses of this metropolitan with the same respite. It is a recreational hot spot for a populous which has such few public places to go to for leisure. Lahore’s canal was filled with the laughter of women and girls. I stood up and got close to a group of boys to take some photographs. Another boy, after many fruitless attempts, somehow gathered the courage and actually dived. This experience, I am sure, must have ended his fear of the water. All his friends clapped and continued jumping into the water again and again. The younger generation hardly has any playgrounds or places reserved for their enjoyment, so the canal truly helps fill this void. I spent more than five hours there and almost forgot that I was sitting in the midst of the second largest city of Pakistan. The experience reminded me of life in the village because it was pure, lovely and enjoyable.

The writer is the author of the upcoming book 'Lahore by Metro' and founder of photoblog: @MetroDaily. He tweets at @heyfaizan (twitter.com/heyfaizan)

From a bright student to a beggar: “The hate never melted” – Noshi’s journey as a transwoman