Why single-sex schools are failing your children 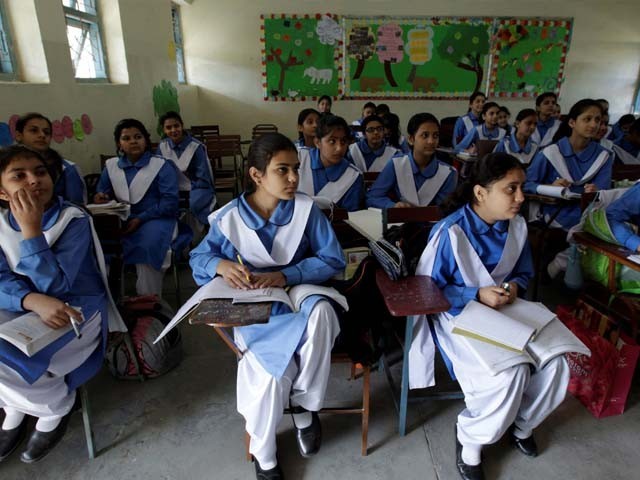 Single-sex schooling stunts children’s social abilities, causing them to deal with situations involving the opposite gender far later on in life than they should. PHOTO: REUTERS

Recently, I came across diaries of mine from my mid-teenage years. For close to a year, nine out of my 10 diary entries revolved around some boy or another, while the rest revolved around the intensity of my self-hatred because of how the opposite gender made me feel. There were a few entries scattered throughout concerning friends and family, but that was about it. What put me off was that even after flipping through multiple entries it was difficult to come across actual events from the year. All that particular years’ diary covers is boys and their affect on my sense of self-worth.

I’ve always been adamant about the negative impact Pakistani society has on its people, and what I strongly believe pushed me even further from adapting and finding my own strength within it was my schooling. More specifically, my schooling in an all-girls school.

There are a number of positive attributes one may gain from spending their youth in a single-sex school. Who knows, some might prefer it since it actively separates girls and boys from associating with the opposite gender, an aspect which many conservative parents must cherish.

However, in their attempt to school young children away from the opposite gender, and the troubles that may come along with them, while also nurturing them to become capable young adults, single-sex schools fail dramatically. In the process of nurturing them, single-sex schools are incapable of providing these children with one specific attribute, which in turn tends to have a long-term effect: adaptability. Specifically, adaptability in social circles which aren’t closed off to any particular gender.

Yes, you can easily prevent the quantity of your child’s interactions with the opposite gender through techniques such as this. But my question to you is, for how long? Let’s face it, in the real world, no matter how far one or one’s parents may go to prevent their child from mixing too much with the opposite gender, it will eventually happen. Such interactions continue to be extremely taboo in Pakistan. I can’t recall the number of times I’ve heard aunties judging other people’s children when seeing them with the opposite gender, and then moving on to spread such ‘gossip,’ all the while turning a blind eye to the habits of their own children. And it is here that we see single-sex schools, that is, all-girls schools and all-boys schools, failing.

When children aren’t exposed to and are kept away from interacting with the opposite gender from a young age, and then are suddenly thrust into a world where such social interactions are a fact of daily life, it can be a struggle for them to adapt and consequently thrive. Thus single-sex schooling stunts children’s social abilities, causing them to deal with situations involving the opposite gender far later on in life than they should. This can easily lead to these young adults having to deal and adapt with a barrage of emotions and obstacles which they were never taught about during their early years.

One would say that while schools are meant to educate children, it is also their responsibility to equip them with certain social skills. Isn’t that exactly why everyday schooling is generally preferred over home-schooling, since it presents opportunities for children to socialise? Given that children attend school every day from an age early age, all the way up to the age of 18, one can come to the conclusion that schools act as the defining part of a child’s life. They serve as an effective training ground for children through daily interactions with their peers. Taking a large chunk of that away by enrolling children in a single-sex school can lead to problems for young adults once they leave such institutions, and can have a damaging effect on their sense of self and social skills.

In a country such as ours which continues to be largely patriarchal, nothing good can come out of the schooling of young boys in an all-boys school. Imagine this – young boys never being exposed to girls directly while at school. Young boys never being taught how to respect, treat and behave around and with girls. If not during their school days, then where and when else are these boys supposed to grasp such concepts regarding the opposite gender, which may not be actively present in their daily lives otherwise? You may have come across the blatant disregard of men when it comes to women fighting for their basic rights, for some semblance of freedom and peace of mind.

Do you not think if these men were schooled and brought up in an environment which held both genders in equal regard their perspectives and actions may just have been a little improved upon? Is it not simply adding fuel to the fire, allowing for toxic masculinity to spread among a large group of boys, as compared to a situation where both boys and girls are nurtured into young adults,together? It’s easy to see how beneficial it can be for boys and girls to be schooled alongside each other.

Attending a co-education school, the idea I had of the opposite gender was, to put it mildly, wholly incorrect. I was excited, but I hadn’t quite experienced, or didn’t even have the knowledge, of how the opposite gender may interact with you, and how your emotions can come in between logic and common sense. I went in thinking that if a boy spoke to you, he obviously liked you. That thinking resulted in the aforementioned diaries, where all my attention and sense of self was directed towards the opposite gender, and led to the next two to three years revolving around them as well.

It led to a great deal of heartbreak and emotional trauma, all due to the vulnerability on my part for not having the social skills to appropriately deal with and act sensibly with the opposite gender. All of this, I believe, could’ve been avoided only if I had been nurtured in an environment involving both genders from the very beginning.

It didn’t end there, of course. It’s only now, a decade later, that I’ve become more comfortable with the idea of traversing a social environment with the opposite gender. The rest of my teenage life, and the years which followed, were also spent being closed off to and keeping a distance from the opposite gender. I never quite learnt how to adjust and would often feel incapable of adapting to social situations involving boys. Being brought up in Pakistan left a lasting impact on my self-worth. A society where girls tend to learn from an early age that boys are the centre of their world, the reason they are brought up, skilled and made to look a certain way, ultimately ending with marriage.

An apt case study of diaspora blues, the author is overwhelmed by the qualms and woes of being Pakistani. She currently resides in Malaysia, humanising chatbots. A writer by nature and nurture, she blogs at mithamatics.wordpress.com. She tweets at @MyraM93 (twitter.com/MyraM93)

Move over, Black Mirror! Love, Death and Robots is the new dystopic show in town!

Your daughter's education is as important as her marriage