Maryam Nawaz can’t be vice president of her own party but Jahangir Tareen can be ‘deputy PM’? 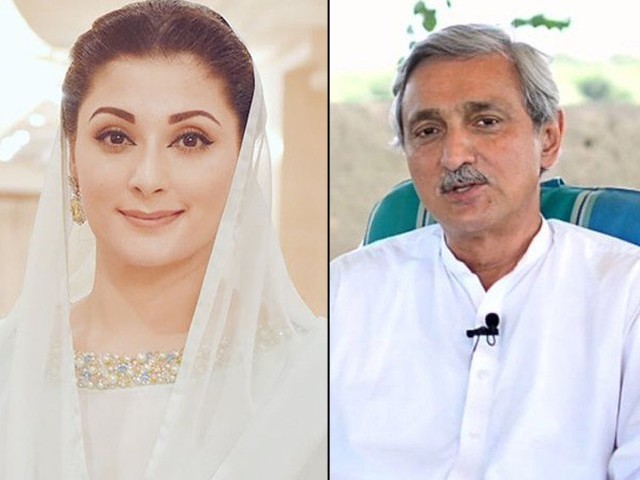 Jahangir Tareen has been declared corrupt and dishonest by Supreme Court, while Maryam Nawaz has been cleared of her charges.

It was a mammoth show of street power by the Pakistan Muslim League-Nawaz (PML-N) in Lahore on May 7th. Nawaz Sharif was returning to Kot Lakhpat jail, but the reception he received from his vote bank in Lahore along the way certainly created life in the otherwise lifeless political narrative of PML-N.

The credit for this power show goes to Maryam Nawaz, who has recently been promoted to one of the vice presidents of the PML-N. Her aggressive style of politics and her ability to pull large crowds within no time at all has started giving the Pakistan Tehreek-e-Insaf (PTI) sleepless nights. After all, no one expected that only with one tweet and on a notice of a day or two, Maryam would successfully pull such a large crowd on Tuesday.

After witnessing a revival within the PML-N, the PTI has submitted an application to the Election Commission of Pakistan (ECP) challenging Maryam’s appointment, suggesting that she has been disqualified and thus cannot hold any public or political office.

If anything, this move makes it clear that PTI and Imran Khan see Maryam as a threat and are afraid of her political charisma and her ability to take on her detractors without any fear of consequences.

Yes, Maryam was convicted by the accountability court for concealing her father’s crimes, but it is important to note that the Islamabad High Court suspended her sentence. In his judgement, Justice Athar Minallah clearly stated that the accountability court’s decision was flawed and Maryam could not be convicted only on the basis of assumption, especially as long as Nawaz’s crime itself was not established in the court. So Maryam currently has a clean chit, and given the rising position of the PML-N, it is quite unlikely that any court will overturn the suspension and order for Maryam to be rearrested.

On the other hand, in order to hide its fear of Maryam’s aggressive politics, PTI is taking refuge in talk of ‘ethics’. According to PTI, a convict or a person accused of corruption cannot take part in active politics. But then how is the PTI still in power, when within its ranks are scores of convicts and politicians accused of corruption, references against whom are pending in the National Accountability Bureau (NAB)?

Pervez Khattak is still working as the Defence Minister, even though a probe against him is pending in NAB. Not to forget that NAB inquiries against Information Minister Firdous Ashiq Awan and Chaudhry Pervaiz Elahi have been mysteriously closed. And what about Azam Swati and Aleem Khan?

Dear @ImranKhanPTI how has NAB closed its inquiry against Firdaus Ashiq Awan’s corruption within one day of you inducting her into your cabinet?

Then there is the matter of Jahangir Tareen, who has been declared corrupt and dishonest by the highest court of the country. Even his review petition against his disqualification was rejected. Then why is Tareen still in power? Why is he acting as Imran’s ‘deputy’? Why is he a regular feature at the PM Secretariat and gets a say in Pakistan’s economic and governance policies?

Tareen is actually making all the important decisions and is a constant presence in Imran’s cabinet meetings. He is also believed to be the man behind Asad Umar’s removal, and clearly controls both the Prime Minister House and the Punjab House. But has Tareen returned the money he acquired illegally and apologised for his crimes? No, he has not even accepted he did anything wrong. Then as long as people like Tareen are running the show for PTI, it holds no moral high ground or any justification to point fingers at others.

How can a party being run by the disqualified and dishonest Tareen in any way criticise the PML-N and Maryam, who has been cleared by the courts, unlike Tareen? How can PTI knock on the door of the ECP to bar Maryam from holding a position in her own party when they have not done the same in Tareen’s case?

These are the double standards that have plagued PTI since it came to power. When Tareen runs PTI’s party affairs while other politicians known to be corrupt end up running important ministries and act as advisors for the PM, neither the party nor its fan club sees this to be an issue. However, they expect other political parties to bring angels and saints to their ranks and follow the ‘ethics’ they themselves are not.

PTI trying to remove Maryam from her own party just seems to be a deliberate delay tactic as it deals with its own pending case of foreign funding in the same commission. Ironically, this is the same ECP against whom PTI went to court in the foreign funding case and whom Imran termed as ‘biased‘. Akbar Babar once reportedly told this correspondent that the PTI lawyer outside the election commission smiled and told him that they will make sure the foreign funding case keeps getting delayed for a few more years. Is this not a mockery of ethics and law?

A politician, irrespective of which political party or ideology he or she belongs to, can never be deprived of the support of the masses through their struggles, nor does a true leader need the shield of a designation in their party cadres for their leadership to shine. From Zulfikar Ali Bhutto to Benazir Bhutto and now through Nawaz, we have seen that despite being termed corrupt and disqualified by the courts, these leaders continued to enjoy the support of the masses. Maryam has now emerged on the political horizon as the heir to Nawaz because of her persistence and her firm stand when all odds were stacked against PML-N and Nawaz.

Ask any senior journalist, like Muhammad Ziauddin, for they can better tell the tale of how corruption allegations are used against politicians and have been since the 60s. In Pakistan, dictators like Pervez Musharraf can lead political parties despite having ongoing cases of treason against them, while rich men like Tareen can run the country from behind the scenes despite being labelled dishonest and disqualified by the Supreme Court. However, a woman who stood against all odds, fought for her father, kept her political party alive and even went to jail, leaving her mother on her death bed, should not be allowed to have a formal position in her own party, because those are the arbitrary rules we follow in Naya Pakistan.