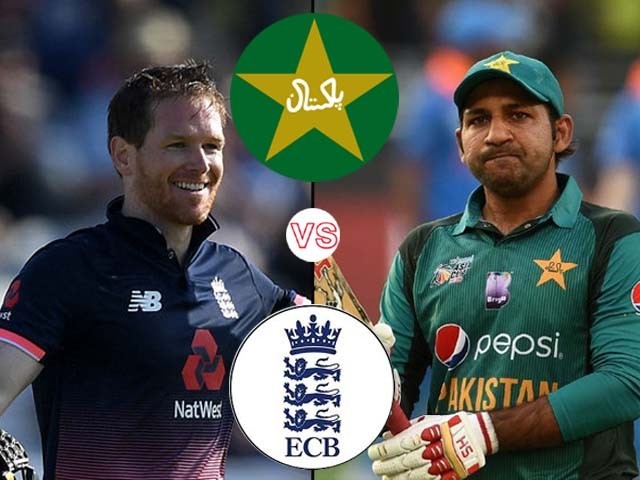 Pakistan should look to target the English spinners and bat with a positive approach.

The five-match ODI series between England and Pakistan begins on May 8th, 2019. A series against England, one of the favourites in the upcoming World Cup, and that too in the country which is hosting the tournament, will benefit Pakistan in many ways.

Firstly, it will help the players get used to the conditions in England. Secondly, playing against one of the top teams just before the mega event will provide a fair assessment of where the team stands. Pakistan’s biggest weakness currently is their lack of power-hitting. How Pakistan deals with this deficiency will be a crucial factor in determining how they will fare in the World Cup.

A thread on some observations abt Pk in the lead up to the World Cup.

The series will also seal the fate of Mohammad Amir and Asif Ali since both will be given a chance to cement their place in the 15-man World Cup squad. If Amir does enough to impress Chief Selector Inzamamul Haq and the team management, it will be interesting to see who he replaces. Now let’s see how the two teams stack up against each other.

England’s dangerous batting is one of the reasons why they are being rated so highly by cricket pundits. Their ability to regularly score over 300 runs in the first innings and to chase down totals in excess of 300 is remarkable. In contrast, Pakistan struggles to reach 300, let alone cross it. That is clearly one area where England dominates.

England is blessed with an aggressive opening pair in Jason Roy and Jonny Bairstow. Both have strike rates of above 100. Roy, in particular, can be dangerous when he gets going. Then comes the ever reliable Joe Root, who plays the anchor role and averages almost 51. Skipper Eoin Morgan is in terrific form, as we witnessed in the T20 match against Pakistan. He is a dynamic batsman who can stabilise the innings and attack more when needed. Perhaps the most destructive is Jos Buttler since he provides that late burst which every batting side needs in the latter part of the innings. Eoin Morgan and Joe Denly of England celebrate after winning during the Twenty20 International match between England and Pakistan.

Pakistan, on the other hand, has an unreliable opening pair, with Fakhar Zaman acting as the aggressor and Imamul Haq acting as the accumulator. Zaman is the sort of player that takes the attack to the opposition. If Pakistan is to do well against England and in the World Cup, he is going to be the key batsman. On the other hand, Imam’s style of batting is completely different since he takes fewer risks than his partner. He struggled in the T20 against England, managing only seven runs off 10 balls. Additionally, Imam’s slow strike rate in the beginning phase of his innings is something he desperately needs to work on.

Batting at number three, Babar Azam is Pakistan’s best batsman in the format. His 65 runs off 42 balls was one of the positives for Pakistan in the T20 against England. Of late, he has worked on his power-hitting and there seems to have been slight improvement. There has been talk of Sarfraz Ahmad batting higher up the order, which I believe would be the right move as he is the sort of batsman that keeps the scoreboard ticking. Babar Azam of Pakistan bats during the Twenty20 International match between England and Pakistan at Sophia Gardens.

Mohammad Hafeez, Imad Wasim and the big-hitter Asif can provide the final push towards the end of the innings. Overall, Pakistan has only two batsmen, Asif and Wasim, who have a strike rate of above 100 while England has four such batsmen. Hence, from a batting perspective, England is way ahead of us. They have adapted to batting in the modern ODI very well since their dismal showing in the 2015 World Cup.

Pakistan, however, is still stuck in the past with its old-fashioned ODI batting style. Their approach in batting will be the key factor in determining how well the team does in this series and the upcoming World Cup. The clean sweep at the hands of Australia earlier in the year was largely due to the defensive mindset of the Pakistani batsman.

Is a) Pakistan’s bowling rubbish, b) England’s batting brilliant or c) all of the above?

we need a +/- in cricket to track how many runs a player scores vs how many they leak on the field. relevant almost exclusively to this version of the pakistani side, but worth it.

In terms of bowling, Pakistan may face problems in the spin department. The absence of Shadab Khan will undoubtedly hurt them. His replacement, Yasir Shah, who I believe should’ve never been selected in the first place, is a big gamble. But as he has been selected, I’d assume that he would get a chance to play. It will also help to settle the debate as to whether he is a good enough ODI bowler or not.

England has two spin options, Moeen Ali and leggie Adil Rashid. It’s not the most potent spin attack, but not bad either. Pakistan’s Shadab Khan delivers a ball during the second T20 cricket match between South Africa and Pakistan at The Wanderers Cricket Stadium.

When it comes to fast-bowling, Pakistan has the upper hand. The combination of Hasan Ali, Amir, Shaheen Afridi, and Mohammad Hasnain is an impressive one. The inclusion of Amir in the bowling line-up is necessary because even when he is not taking wickets, his ability to control the flow of runs will be much needed. Hasan will need to pick up his game since he was the most expensive bowler after Faheem Ashraf in the recent T20 against England.

Pakistan will rely on Afridi for early wickets. How he bowls in his first spell will set the tone for the rest of the bowling attack. On the other hand, playing in his debut T20 against England, Hasnain looked impressive. Even though the 19-year-old didn’t pick up any wickets, he bowled some sharp yorkers and was economical.

Poor fielding cost Pakistan the only T20 vs England. Hasnain bowled well but wasn’t at his best in his debut match,much more to come from him in ODI’s, fine batting by Baber Azam but a superb Inngs from Eng captain Morgan.

England has many pace options.  The new kid on the block, Jofra Archer, had a good outing against Pakistan in the T20. He can bowl well-directed, quick yorkers and bouncers. Moreoever, he is an outstanding fielder and an aggressive lower-middle order batsman as well. On the other hand, David Willey offers something different with his left arm angle and his ability to swing the new ball. Others like Mark Wood, Liam Plunkett and Chris Woakes will also be among the bowlers that Morgan may turn to in the upcoming matches. Jofra Archer of England celebrates after dismissing Imam Ul Haq of Pakistan during the Twenty20 International match between England and Pakistan at Sophia Gardens.

All things considered, challenging England on their home turf is an uphill task. The ability and depth of Pakistan’s batting order will be tested and the series will also determine how good the bowling line-up is. Pakistan should look to target the English spinners and bat with a positive approach. On the other side, England’s test will be to continue scoring big totals against a strong bowling attack.

The favourites are definitely England and I predict that they will win the ODI series 4-1.