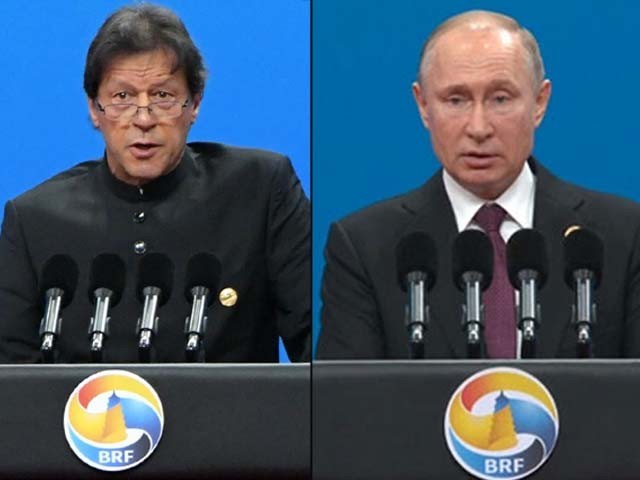 Views expressed by prominent members of the Russian intelligentsia suggest that Moscow is moving towards a more balanced approach towards Pakistan.

When Pakistan failed to secure a meeting with Russian President Vladimir Putin at the recent Belt and Road Forum, a report in the Express Tribune called it a major “diplomatic setback”. Sure, many would have expected Prime Minister Imran Khan to have at least had a casual meet up with the president of Pakistan’s new “regional ally on Afghanistan,” however, it seemed that Putin had other, and more important, commitments.

In light of this failure, should it really be seen as a major “diplomatic setback”?

Sure, the Pakistan Tehreek-e-Insaf (PTI) government is already going through a series of governance and public relations embarrassments; however, this failure cannot be pinned on Imran’s government as a “diplomatic setback” for a number of reasons.

First and foremost, a setback would be if one of our close allies and partners, like China or Saudi Arabia, refused to meet us at such forums, and not a country that was, until only recently, one of our foes in the Cold War.

Secondly, as mentioned earlier, Putin had other commitments. He was scheduled to meet the leaders of China, Serbia and Egypt, to name a few, along with addressing a major keynote press briefing.

Thirdly, even if Putin did not have prior commitments, one has to take into account the fact that India is a far bigger, and more important, partner of Russia than Pakistan is. Moscow would need to thoroughly plan the optics of any meet up with Islamabad without irking New Delhi. When one looks at the numbers, Pakistan-Russia trade is far less than $1 billion, while Indo-Russia trade hit the $9 billion mark last year.

However, having said that, there is also a growing consensus among the Russian intelligentsia that Islamabad is also an important regional “security partner,” and therefore Moscow cannot solely favour New Delhi when it comes to major strategic issues.

“Bilateral relations between Russia and Pakistan have picked up considerably with Pakistan’s accession to the SCO (Shanghai Cooperation Organisation) and the ongoing settlement process in Afghanistan.

“It appears that a balanced approach emphasising good will and trust toward the parties of the Indo-Pakistani conflict and a search for mutually acceptable ways of settling it may be the best response to the recent clash.”

In addition to that, Dr Sergei A Baranov, counsellor at the Russian Embassy, recently stated at an event in Islamabad:

“The significance of Pakistan is determined by its role in regional politics, its influence in the Muslim world and its geostrategic position. Interaction with Pakistan in the framework of the SCO, as a full-fledged member, is very important for Russia to carry out cross-regional economic, energy and infrastructure projects, and we are very glad that Pakistan is practically engaged in (the) SCO, especially in joint counter-terrorism efforts.”

Such views expressed by prominent members of the Russian intelligentsia suggest that Moscow is moving towards a more balanced approach towards Pakistan. Such an approach also dispels speculation put forward by some ‘experts’ recently in Pakistan that Moscow might favour India in a situation of conflict between the two neighbours.

Another area that has seen progress between both the countries is defence cooperation. Defence and security cooperation between Russia and Pakistan has been on the rise, especially since late 2014. Both countries agree that the presence of the Islamic State (IS) in Afghanistan is a major regional security threat. It is because of this consensus that both countries have played an integral role in the Afghan peace talks by bringing the Taliban to the discussion table. Moscow strongly believes that the Taliban can effectively counter the threat posed by IS in Afghanistan.

In addition to that, in terms of defence procurement, Pakistan also received its contingent of four Mi-35 helicopters from Russia, the deal for which was concluded when General Raheel Sharif visited Russia in June 2016. Moreover, both Pakistan and Russia have organised joint military exercises in both the countries. In that regard, on the final day of the Druzhba-III exercises in Pakistan in November 2018, Pakistan Chief of Army Staff, General Qamar Javed Bajwa, said that the “exercise was a great forum for reinforcing existing relationship between the two militaries”.

It is not only defence, but also the energy sector where both the countries have taken steps towards increased cooperation. On the energy front, Pakistan recently signed a provisional pipeline agreement with Russian energy giant Gazprom. According to the memorandum of understanding signed between Pakistan and Gazprom, if constructed, the offshore pipeline would supply gas to Pakistan and others parts of South Asia from the Middle East.

Hence, with these recent developments, one might ask again: Was Putin not meeting Imran really a “diplomatic setback” for Pakistan?