“A Moses without manifestation, a Christ without a cross”: Karl Marx as remembered by Wamiq Jaunpuri 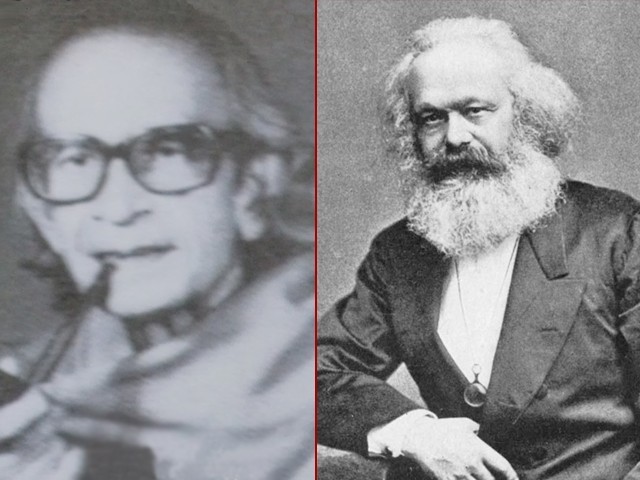 “The philosophers have only interpreted the world, in various ways. The point, however, is to change it.” – Karl Marx

Europe in the 19th century gave birth to two thinkers who changed everything about how we see the world. One was Charles Darwin. The other was Karl Marx, who was born 201 years ago today.

At that time what eluded many was the plain and simple fact that before serving the cause of politics, science, art, and so on, humans needed water to drink, food to eat, clothing to cover themselves and homes to seek shelter. To attain these basic necessities of life, they make tools and implements and are forced to establish relations with other humans. The relations of production are determined by the nature of the geographical environment and the tools of production, and society keeps changing them according to its needs. Changes in the method and relations of production themselves are the reason for social revolution.

With the help of these ideas, Marx recognised and evaluated the capitalist system and pointed towards the sun of the new system which was about to dawn from the former’s womb.

Noted progressive poet Wamiq Jaunpuri – more famous for his iconic poem on the Bengal famine Bhooka Bangal (Hungry Bengali) – wrote his own, little-known eponymous poetic tribute to Marx, which is perhaps the best short ode and introduction to the latter in all of Urdu literature, and whose original translation presented here is a fitting conclusion to Marx’s bicentenary celebrations.

Marx’s knowledge and wisdom has no parallel

Who does not benefit from his perception

The sun of the brightness of conscience and cleverness

What to talk of those who love him

Even his enemies keep his Book as their pillows

His great compilation is a materialist history of the world

Das Kapital or the very essence of life

The door of socialist philosophy opened in every heart

How many hells became Paradise with his single Manifesto

He who turned many a desert into a city of roses

Marx has embraced science and Man

He granted the mind a curriculum in the consciousness of life

His discernment, his excessive love of the glance of one acquainted with truth

Which unveiled the face of the poverty of wealth

His foresight unlimited, his logic unparalleled

He revealed the new sun to us

His every prediction is a veil cast down

No force can become a roadblock for him

The war-song of the wise, and the shield of the peasant

The workers’ army is a fellow traveller and rider

When the blow of Moses cuts the spell of kingship

The Pharaohs of today will likewise

Gradually become the victim of revolution

The pocket of the capitalist after all is fighting the war

He does not even refrain from atomic weapons

The ungodly civilisation is hopeless for its future

The restlessness of the enemy of humanity is visible

The little devil of Iqbal trembling with fear

Addresses Satan in this manner

The pundit, mullah and priest all stand harmless

For he is like a Moses without manifestation, a Christ without a cross

Not being a prophet, but a book by his side.