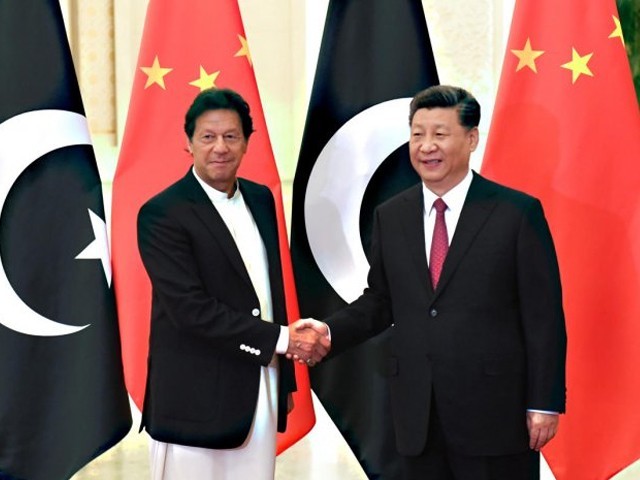 Prime Minister Imran Khan shakes hands with President Xi Jinping in Beijing before a meeting at the Great Hall of the People. PHOTO: REUTERS

US President Donald Trump once stated that he was for free and fair trade, but he just wanted better deals. This statement can be applied to his trade war with China, which he initiated last year to bring down the massive trade imbalance between China and the US.

Pakistan, too, faces a trade imbalance with China. It signed a Free Trade Agreement (FTA) with China in 2006, which was touted as Pakistan’s gradual phasing out of protectionism. However, there were concerns that exposure to big export powerhouses had the potential to damage developing countries such as Pakistan, that were unable to nurture infant industries behind protective trade barriers like other developed countries could.

The concerns were real, as trade imbalance between the two countries stood at $9.7 billion last year, with Pakistan on the losing end. The FTA with China did not solve the chronic problem of our current account deficit.

Prime Minister Imran Khan’s recent visit to attend the second Belt and Road Forum for International Cooperation has resulted in Pakistan signing various memoranda of understanding (MoUs) with China. One of these is the second phase of the FTA, in which China will open 90% of its market for Pakistani goods while we will open 65% of ours for Chinese goods. Pakistan needs favourable trading terms to shore up its foreign exchange reserves, the depletion of which has been the cause of numerous problems and has led to us knocking at the doors of ‘friendly’ countries and donors with stringent political conditions. Therefore, we need a fair deal for free trade with a country as big as China.

The question is, how can we take advantage of this market access? What if we have nothing to export to China?

This brings us to another important MoU on Special Economic Zones (SEZs), which are part of the broader China-Pakistan Economic Corridor (CPEC) framework. SEZs would manufacture goods that could be exported to foreign markets. The first SEZ will be established at Rashakai, Khyber Pakhtunkhwa, and will include manufacturing units of garment and textile products, construction materials, general merchandise, electronics and electrical appliances, automobile and mechanical equipment. Development on other SEZs would be contingent upon the progress of Rashakai.

The location of Rashakai’s SEZ offers a glimpse of the effectiveness of CPEC. It is located at an intersection of the Karakoram Corridor and the Main Line-1 (ML-1). It is also connected to the M-1 Motorway through the Karnal Sher Khan Interchange and is almost an hour’s drive away from the Islamabad Airport and the N-55 Indus Highway. This is important because factories need to be connected via highways, expressways and rail lines.

This leads us to the third important MoU signed between Pakistan and China: the agreement on a technical package to upgrade ML-1. This will significantly increase the speed and capacity of railways, as line capacity will go from 34 to 171 while freight transport volume will increase from a paltry 4% to 20%. This will help Pakistan Railways get rid of deficit that has ballooned to Rs350 billion. Investment in the railways along with improved technology and added capacity could rescue it from ruins and help it regain its old status.

These three deals help us put CPEC into perspective.

CPEC is supposed to bring prosperity to Pakistan. However, its effectiveness depends upon how well it is carried out. The first phase was about infrastructure development: rail, motorways and ports – conduits through which cargo would be transported. Then came power projects which would light up the factories, helping Pakistan through its chronic energy crisis.

Subsequently, SEZs will be established which will be clusters of factories producing merchandise, mainly to be exported. Of course, this is not going to happen in that particular order, as work on the ML-1 is yet to begin. This mechanism also has to be supported by frameworks such as fair FTAs and the availability of finance so that the whole project does not crumble. There is news that Chinese commercial loans will be rolled over the next few years, which gives us the confidence that future financial snags would be dealt with through Chinese cooperation. And that CPEC is not a debt trap after all.

These new MoUs also give us hope that CPEC is what it is propagated to be: an important node in the larger Belt and Road Initiative that will interconnect Eurasia for the mutual benefit of all states. It also gives us the optimistic impression that deals can be renegotiated, that criticism of any bilateral or multilateral deal does not amount to treason, and that further fine-tuning is not only the need of the hour but a permanent necessity of co-operation.

Pakistan needs to work smart as well; after all, opacity in the deals would prevent smart inputs by experts. When the deals are made public and scrutinised by a lot of minds, only then will we be able to tweak them to our net advantage. I hope the incumbent government endorses the policy of transparency vis-a-vis CPEC so we can ensure it brings the good it promised.