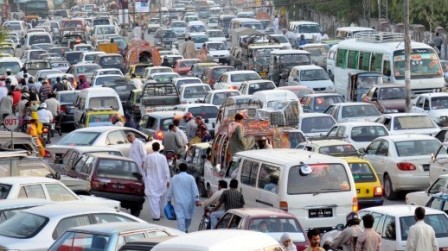 Traffic in Lahore is chaotic, unruly and the roads are often jam packed. PHOTO: SEEM NAZIR

Traffic in Lahore is chaotic, unruly and the roads are often jam packed with traffic of all sorts. Increasing traffic poses a big challenge for all those institutes responsible for planning, devising and implementing transport policies.

Traffic is chaotic because drivers, whether of a bus, wagon, car, rickshaw or motorcycle, like driving in their own peculiar way. They are always in such a hurry that most of the time they even forget whether they intended to turn left or right. They carelessly park their vehicles on the sides of congested roads without realising that their vehicle may end up blocking the entire traffic flow. In case of a traffic jam, almost everyone on the road, instead of waiting patiently, worsen the traffic jam by self assuming the responsibility of traffic wardens and devising a way out for their vehicle. They also love honking on roads adorned by government signs advising in Urdu that “honking is prohibited on this road’.

Perhaps, following no rule is the new rule on the roads. Dr Shabih-ul-Hassan Zaidi thinks that driving license that issue authority to drive to the bearer are also to be blamed for the behaviour of drivers on the roads.

Besides people’s behaviour on the roads, there are other multiple issues which are adding up and pointing towards a public policy failure. Firstly, private vehicles (including cars and motorcycles) are increasing at an alarming rate of 12.2% per annum. Dr Shabih-ul-Hassan Zaidi, a senior town planner was of the view that, for the past six years, the car ownership rate is growing at least five times more than the population growth rate of the country. We have also witnessed the widening of roads to accommodate the increasing traffic. “This rapid increase in the number of cars is straining the capacity of the existing road infrastructure in Lahore. But the widening of roads by reducing the size of green belts is not a viable solution,” pronounced Dr Shabih-ul-Hassan Zaidi.

One major reason for the increase in the number of vehicles (cars or motorcycles) is the absence of an efficient public transport system. According to the Lahore Rapid Mass Transit study 2006, there are only 1053 buses for approximately 200,000 regular commuters. In addition to buses, there are 518 mini buses, 475 mini wagons and 34156 rickshaws plying on Lahore roads but still the supply side of the existing public transport system does not match the growing public demand. Secondly, the condition of public buses, mini buses or wagons is deplorable. Bus services such as New Khan and Daewoo, which started some ten years back, have increased their fare many times but apparently maintenance of these buses seems to be the lowest priority.

Thirdly, the corporate sector plays a role in aggravating this traffic mess by exploiting the existing gap created due to the wretched public transport system, by offering easy car leasing options to people. Now, anyone with a few months of job experience can lease out a car. Neither the corporate sector nor buyers think for a second about the environmental consequences of selling or buying cars. Of course, the former is aiming at more profit and the later their own convenience.

Fourthly, there is the issue of governance or the lack of it, which is exacerbating the problem. For instance, there are number of government bodies responsible for managing and planning the traffic and transport issues of the city. Some of these departments include Punjab Transport Department, Traffic Engineering and Planning Authority, City district government, Urban Unit of Planning and Development Department, City Traffic Police etc. “The roles and responsibilities of all these departments overlap. Additionally, they work in isolation and coordination is completely missing,” says Dr. Ghulam Abbas Anjum, Chairman of City and Regional Planning Department.

A joined up government is what is needed, which requires the involvement of all relevant government departments. This approach has been employed in countries like Australia to solve pressing problems like traffic congestion. Nevertheless, such an approach is completely missing in the case of the city of Lahore. Here, the Transport Department of the Government of Punjab is developing a transport plan for the city. Unfortunately, the Traffic Engineering and Planning Authority has not been taken on board prior to embarking on any future transport plan. It appears that the introduction of a joined-up government concept would take some time in countries like Pakistan.

Similarly, the knowledge of experts, working in various government departments of Lahore, about existing national framework for transport is also a matter of great concern. I talked to Mr Mohammad Ozair, Senior Transport Specialist of the Urban Unit, Planning and development department and asked whether Pakistan has any national transport policy. Mr Ozair was completely ignorant about any such policy at the national level even though such a national level policy was formulated through the assistance of Asian Development Bank.

On the contrary, Dr Ghulam Abbas Anjum, Chairman of City and Regional Planning Department, was of the viewpoint that the only viable option is to provide an efficient public transport system to the city dwellers. “Traffic congestion would be reduced to a great extent if government considers the option of rapid mass transit bus or rapid mass transit rail system. Lahore Rapid Mass Transit Rail Project (LRMT) is already on the table but there were serious delays due to unavailability of funds,” said Dr Ghulam Abbas Anjum.

A researcher based in Islamabad with an interest in humanitarian issues