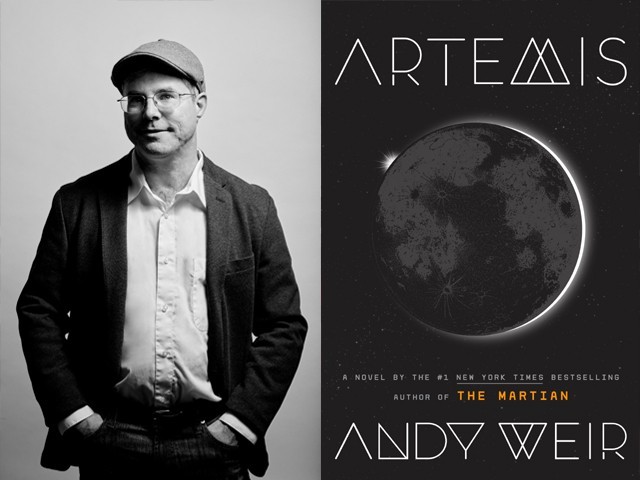 Weir stations the proceedings on Earth’s satellite where a lunar city serves as the centre of the action.

The massive success of a debut project may propel its creator to global stardom, but it can also have some side effects. Operating under the shadow of an acclaimed first effort while struggling to meet its standards thenceforth can have its downsides, an idea that is conveniently illustrated by the phenomenon of the sophomore slump.

The American writer’s first novel, The Martian – the story of an astronaut stranded alone on Mars – was one of the most exciting, interesting and compelling science fiction adventures of recent years.

Unfortunately, exciting, interesting and compelling are three of the things that its successor, Artemis, is not.

Weir shoots for the moon with his second novel, stationing the proceedings on Earth’s satellite where a lunar city serves as the centre of the action.

The protagonist is Jazz Bashara, a porter and smuggler of Saudi origin who moved to Artemis, the city on the Moon, when she was six. Now in her 20s, she has established a reputation for drinking and sleeping around, having given up her religion, much to the disappointment of her welder father Ammar, who is a devout Muslim.

When an underhanded businessman offers her the chance to make a fortune by sabotaging a rival company, she hatches an outlandish plan to carry out the job. But her scheme doesn’t go quite as planned, and she ends up running into a conspiracy that could have dire consequences.

Admittedly, the setting – the Moon! – is quite fascinating and it is fun to read about the lunar city and what it might be like to actually live on the lunar surface one day. Moreover, Weir is clearly adept at weaving science into his tales. All that, sadly, is undercut by a convoluted plot that is just plain ludicrous when it isn’t busy being preposterous.

It also doesn’t help that Jazz is about as irritating as a protagonist can be. A grown woman with the personality of a teenage boy, she seems immature, lazy, unnecessarily profane, amoral, and the opposite of bright. We’re repeatedly told that Jazz is very intelligent but she never bothers to actually demonstrate said intelligence at any point. She is meant to be witty, but her attempts at humour are groan-inducing.

And why should we care about the fate of a reckless smuggler-turned-saboteur? Weir doesn’t venture towards an explanation. The Martian was a triumph because Mark Watney was working against astronomical odds, struggling for survival. Jazz, on the other hand, is trying to make a quick buck by destroying someone else’s property, causing extensive damage, and putting hundreds of lives at risk. All that – even if seen under the light of the absurd conspiracy – does not make her someone to root for.

Weir tries to create a multicultural society, but instead of coming up with something smart, he keeps stumbling on stereotypes. Parts of his characterisations are cringe worthy; others are downright offensive. Everyone appears to have been given a nationality, religion and sexual orientation seemingly at random. The supporting characters seem like they are diverse just for the sake of diversity, like a quota was kept in mind.

There are plot points that ultimately don’t go anywhere. The pacing is off. The dialogues seem forced and unnatural. Too much goes wrong in this one read.

Artemis is one giant leap in the wrong direction for Weir. But what’s most frustrating about the book is that it could actually have been very interesting if better executed.

At its core, there really is a fascinating idea – colonising the Moon and all its wonderful, messy outcomes. Had this premise not been paired with an unsatisfying caper featuring a grating heroine, we might have landed on a tale that wasn’t this disappointing.