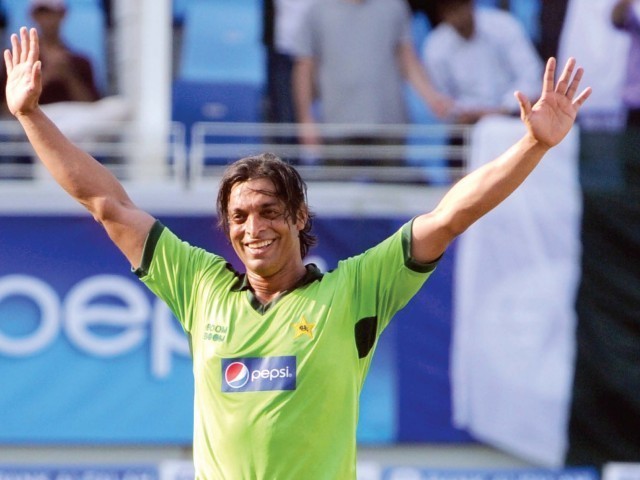 Akhtar will at best be remembered as an overgrown child who didn’t play well with others and enjoyed cheating rather than hard work. PHOTO: AFP

Shoaib Akhtar’s autobiography is generating something of a stir, and perhaps it should. Personally, I haven’t read it yet, only the bits and pieces available across my beloved WWW. However, if these excerpts are anything to go by, I must congratulate Mr Akhtar on his glorious achievement.

Akhtar has proven beyond a doubt that the image he created, and then tried to deny throughout his career, was indeed true. And I’m not even talking about his off-the-field antics. After all, like any poor kid who stumbles onto a bundle of money, he was bound to make stupid decisions with it. However, women, partying and schmoozing (or something that rhymes with it) aside, what did he bring to Pakistan cricket?

Akhtar, at his peak, was a devastatingly fast bowler, but pure pace isn’t what makes great bowlers. After all, from Australia’s famed duo of Thompson and Lillee, it was Lillee, the slower of the two, who is remembered as the better bowler.

The West Indian pacemen of the same era provide a more difficult comparison, but again, statistically at least, it was Michael Holding, and later Malcolm Marshall, rather than Andy Roberts, who went down as the greatest pace bowlers of their eras. Even Courtney Walsh and Curtly Ambrose, though nowhere near the pace of Akhtar, used their abilities to devastating effect, even though they played much of their careers with a supporting cast comprising injury-prone Ian Bishop, and pretty much nobody else. And then of course, all of these fearsome calypso pacemen were regarded as gentlemen cricketers, not embarrassments to their uniforms.

Richard Hadlee, Kapil Dev, and Imran Khan couldn’t compete with Akhtar for raw pace, but all rank among the best bowlers their respective nations ever produced, pace or otherwise.

But let’s be fair and make the comparison contemporary. The targets of Akhtar’s abuse include his former captain, Wasim Akram, arguably the best fast bowler Pakistan has ever produced and surely the best left arm paceman the world has ever seen.

Among other things, he accused Akram of ruining his career.

Not the performance-enhancing drugs, the ball tampering, or pathetic fitness levels that meant that Akhtar could not bowl a quality spell of more than four overs. Apparently that has nothing to do with his decline into oblivion. Instead, he thanklessly blames the man who helped groom him and according to some, even suggested a shorter run-up to prolong his career.

No. Instead, he took the easy way out. After all, popping steroids is a lot easier than actually putting blood, sweat and tears into becoming a world class athlete. Akram, in spite of being a diabetic, managed to be an effective wicket-taker well into his 30s. Go back to the late 80s to find that the younger Akram, who had to deal with his own injury problems, was willing to listen to his captain’s advice to shorten his run-up and focus on variety, rather than pure pace. The result was a man described by Steve Waugh, Matthew Hayden, and umpteen other batsmen as the best all-round bowler they had ever faced.

As far as complaining about teammates and opponents goes, the fact that Akram and Waqar Younis didn’t get along was public knowledge. Yet, the fact that they were highly effective under each other’s captaincy also shows that a true professional athlete makes no excuses for his performance.

After 12-odd years in which he missed more than half of Pakistan’s games due to injuries, and a number of others due to various disciplinary actions, including the steroid violation where he and Mohammad Asif were inexplicably forgiven (message to children: lie cheat and steal, Pakistan Cricket’s Butchers will approve of it all), Akhtar leaves a legacy of…nothing really. He will at best be remembered as an overgrown child who didn’t play well with others and enjoyed cheating rather than hard work. Or, he will be a footnote to the 90s and 2000s.

If Akhtar had even an iota of grace in him, he would have tried to use his fame, rather than his infamy, to finance his life after cricket. A number of other controversial players managed to retire and build respectable careers, both within and outside the game. Rashid Latif started a cricket academy, Akram and Younis have both spent time in management and on the mike. The only thing they did differently from Akhtar was to ensure that they weren’t universally despised by their teammates and opponents.