While endorsing Modi, did Imran Khan forget the plight of Kashmiris and Indian Muslims? 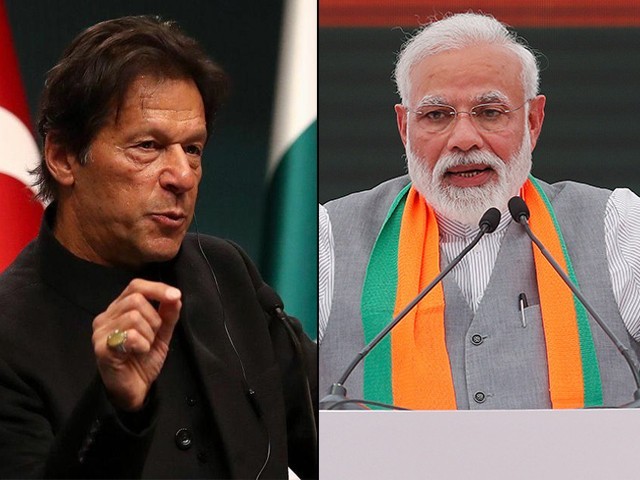 While Pakistan continues to voice the plight of Kashmiris and Indian Muslims, its prime minister should have stayed silent instead of ‘endorsing’ Modi.

Pakistan’s Prime Minister Imran Khan, while talking to Reuters, gave a statement that really shocked the diplomatic world. Referring to the Indian elections, he said:

“Perhaps if the BJP – a right-wing party – wins, some kind of settlement in Kashmir could be reached.”

India’s General Elections have started from today, April 11th, and will continue till the end of next month. The most surprising aspect about Imran’s statement is that it came just a day before the start of the first round of the Indian elections. Usually, world leaders avoid giving out statements that seemingly endorse any political party of a foreign country as it is a domestic matter at the end of the day and they want to be seen as neutral. However, as we all know, Imran has his own way of doing things.

He believes that it would take a right-wing, hyper-nationalist party in India to resume dialogue on Kashmir since other parties like Indian National Congress will be too scared to seek a settlement, fearing backlash.

If we look at recent history, his assumption isn’t wrong as it was Atal Bihari Vajpayee, the Indian Prime Minister in 1999, from the same Bharatiya Janata Party (BJP) who resumed dialogue with Pakistan and visited Pakistan as well. He was also allegedly very close to settling the Kashmir dispute with Pakistan. What works for BJP in this case is that unlike other parties, BJP enjoys the support of the right-wing and hyper-nationalist organisations and hence, fear of backlash is minimum to none.

It is possible that Imran’s statement was supposedly to counter the nationalist, Pakistan-hating electoral agenda of BJP. The party is basing its campaign on nationalism and security while Congress and its allies are talking about a secular country and inclusive society.

At this juncture, a statement coming from Pakistan’s prime minister favouring Modi will actually dent his vote bank as he has been portraying Pakistan as an enemy state that is bent on destroying India. This statement from an enemy’s head of government will give BJP’s rivals an opportunity to criticise Modi and declare him ‘Pakistan ka yaar’ (Pakistan’s friend) in this tense electoral atmosphere.

Pak has officially allied with Modi!

‘A vote for Modi is a vote for Pakistan’, says Pak PM Imran Khan

Bhakts scratching their heads & at wit ends wondering if they should praise Imran Khan or not. 😷 https://t.co/V4pv4u4vgn

However, the question remains whether Modi and his party realise that Imran’s statement is electoral poison in disguise. If Modi wins again, and the chances are high that he will be re-elected with coalition support, he will most likely not feel comfortable talking to Imran given the motive behind his statement, which is very obvious to any politician or political analyst.

On the other hand, if Congress comes to power with the support of its allies, it might use Imran’s statement to put more pressure on Pakistan by alleging that Imran is party to India’s domestic politics and is in favour of BJP.

As vague as they are, these hidden political meanings are the reason why leaders around the world refrain from favouring any political party from another country before the elections.

Let’s assume that Imran has not given this statement to counter Modi’s narrative and he genuinely believes that a settlement on the Kashmir issue is more likely with BJP. The question then arises: does the prime minister know that BJP’s election manifesto states that they will repeal Article 35A of the Indian Constitution? Article 35A is an old legislation that gives special rights to the people of Jammu and Kashmir and bars outsiders from buying/owning property and other opportunities. Almost all of the leaders in Indian-occupied Kashmir (IoK) have rejected this and warned BJP of more unrest in case Article 35A is repealed.

Imran should have also considered this and the brutal treatment of Kashmiris at the hands of the BJP. He would do well to remember that it was during Modi’s regime that the use of pellet guns in Kashmir increased due to which many Kashmiris either lost their eyesight or their lives. The atrocities in Kashmir grew under Modi’s regime and unlike other parties, Modi played the hyper-nationalist card to suppress the fundamental human rights of Kashmiris.

Moreover, it wasn’t only Kashmir that faced the brutal impact of BJP’s regime, as the lives of Indian Muslims in the country has been made difficult as well. Shiv Sena roamed freely in urban areas and harassed many Muslims either for allegedly eating beef or on the basis of practicing their religion. Many cases of hate speech, mob lynching, forced conversions, land jihad, love jihad, forcefully feeding pork and so on were common during the past five years of Modi’s government.

While Pakistan continues to voice the plight of Kashmiris and Indian Muslims and advocates Kashmir’s right to fight for their independence, its prime minister should have stayed silent instead of ‘endorsing’ Modi who has added to the already polarised India.

Though there is no denying that the right-wing party ruling New Delhi can easily initiate the peace process with Pakistan just like Vajpayee did in the late 90s and the early years of this century, the fact remains that there is a big difference between Vajpayee and Modi. The former was a man of intellect and spent decades in the cadres of BJP, while the latter grew to this stature only on the basis of his anti-Muslim and anti-Pakistan narrative. Also, have we forgotten the riot in Gujrat that Modi was accused of staging?

Modi started his political career with Rashtriya Swayamsevak Sangh (RSS), a Hindu nationalist volunteer organisation. He was later assigned by the RSS to BJP in 1985. Vajpayee, on the other hand, was the founding member of BJP and was never associated with any nationalist organisation like the RSS. This is the fundamental mistake that policymakers in Pakistan are making: Modi with his RSS background will never be interested in peace or dialogue because from his religious education to his rise in politics, he was supported by the RSS and he will never do anything that would damage that relationship.

Modi was not interested in initiating dialogue with Nawaz Sharif but it was Vajpayee who told him to move forward with his counterpart. Therefore, if Imran or other policymakers think that after the elections the right-wing BJP will change its stance and resume peace dialogue with Pakistan, they are making another political and strategic mistake.

As is the case in Pakistan, political parties in India are under the influence of personalities and BJP will only toe the lines of Modi. Even if for the sake of argument we can assume that Modi will be interested in real peaceful dialogue with Pakistan, how will he tackle the RSS, other senior members of the party and the backlash which would likely follow due to their hyper-nationalist vote bank?

Vajpayee was able to assert his authority on the party and initiate meaningful dialogue because he was the founding member of BJP and had a tall stature as a leader. This means that Pakistan needs to move past Vajpayee’s era and understand the dynamics of Modi’s narrative and politics.

Imran’s statement came at the wrong time and in the wrong circumstance. Our prime minister still lacks the art of diplomacy. What if roles were reversed and this was an Indian prime minister endorsing any political party or leader in Pakistan? The other parties would of course interpret this as direct involvement in domestic matters and hold a grudge.

As the prime minister of Pakistan, Imran’s words are important because what he says echoes throughout the international community. In his determination for peace, Imran is now answerable to the Kashmiris and Indian Muslims whom he is willing to throw under the bus. Is he willing to make these people go through another term filled of suffering? For the purpose of peace, is he willing to treat Kashmiris and Indian Muslims as collateral damage? Because even if you’re not well-versed in politics, you would know that Modi’s BJP is not ending their suffering any time soon.