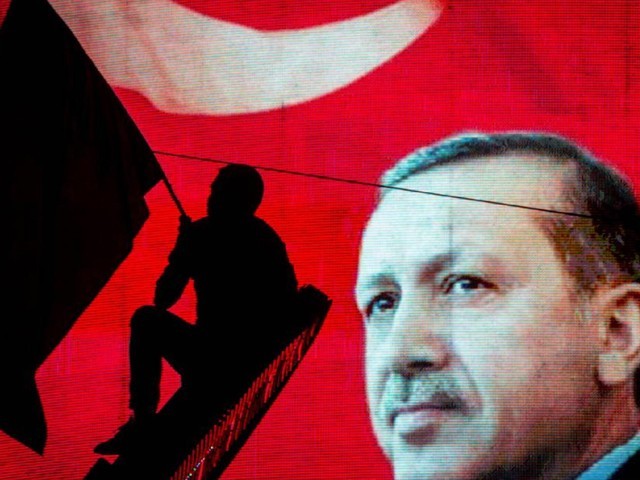 A supporter of Turkish President Recep Tayyip Erdogan waves a flag against an electronic billboard during a rally in Ankara on July 18, 2016. PHOTO: GETTY

Turkish President Recep Tayyip Erdogan’s embrace of Donald Trump-era populist politics not only appears to be nearing its inevitable end, but apparently has done Erdogan no favours in the long run.

In mid-July 2016, an attempted coup in Turkey carried out by a faction of Turkey’s armed forces led to what can only be described as a brutal crackdown, as Erdogan and his ruling Justice and Development Party (AKP) crushed any potential resistance with an iron fist that made even some of history’s former despots pale in comparison.

Barely two weeks after the coup, Turkey dismissed close to 1,700 military personnel (including 149 generals and admirals) and shut down 131 media outlets. Erdogan also oversaw the detainment of 10,000 soldiers, 8,000 of whom were put on trial. He further suspended over 60,000 people within Turkey’s judicial, public, policing and educational systems.

Erdogan’s tight grip on TV and media, his crackdown on dissent and thousands of ordinary workers, as well as the vast resources at his disposal as he threatens a lawsuit have not been enough for him to continue holding on to the reigns of Turkish leadership.

This past Sunday, residents of Turkey voted to elect the mayors of its 81 provinces and their municipalities. Despites AKP’s alliances with the ultranationalist National Movement Party, a tough contest ensued with opposition parties who had made alliances of their own to counter Erdogan’s platform.

In Ankara, Mansur Yavas, the secularist opposition Republican People’s Party (CHP) candidate for mayor, was well ahead of his rival from Erdogan’s ruling party, which has controlled the capital for years. Another CHP candidate, Ekrem Imamoglu, openly claimed he was fast catching up to take Istanbul from Erdogan’s chosen representative. Western media has already begun its fawning over Imamoglu, even though little information about him is known at this stage.

Losing Ankara and Istanbul would have to be nothing short of a Turkish political nightmare for the ruling elite. Unsurprisingly, Erdogan has not exactly accepted this looming defeat. The closest he came to admitting the loss was by stating:

“Those who made false claims are welcome to it… let us see how they govern.”

It is naturally hard for someone to accept defeat to a group of people they deem as ‘terrorist collaborators’ and the like.

I suspect the United States at the end of the day is unsure as to how it feels about these developments. Even the US has its limits in toppling dictators that stop towing the official line in direct defiance of the US and North Atlantic Treaty Organisation (NATO) agenda. Even as I write this, Turkey and Russia are debating the provision of the S-400 missile defence system to Ankara, and Washington has made it clear how it feels about this arrangement. Perhaps if the US had played its cards right, Erdogan’s demise could not be seen to have come at a better time.

As for the rest of the region, particularly Washington’s allies led by Saudi Arabia and Israel, it would most likely welcome the downfall of Erdogan, provided they were able to manipulate his replacement. A Middle East Eye report in January 2019 revealed that the Gulf States and Israel were working together to bring about the rehabilitation of Bashar al-Assad in Syria and that, in fact, the real military threat to the advancement of the Saudi-Israel alliance in the region is Turkey.

Though Iran is typically portrayed as a major existential threat to Israel and an economic and military rival of Saudi Arabia, the Israelis allegedly believe that while Iran can be contained, Ankara requires much greater effort due to its greater military capability. By bringing Assad back into the Arab League, their aim is to turn Syria against Turkey, a country which spent years trying to destabilise the Syrian Arab Republic through the use of proxy jihadist militants.

The Gulf States also intend to use Kurdish elements to counter Turkey. One cannot deny the influence the Kurds possess over Turkey’s local electoral system, if they can be swung in a particular direction.

Whatever happens, we can be sure that the regional dynamics may shift one way or the other. Turkey was once seen as the so-called Muslim success story of the Middle East – a Muslim-majority nation that was allowed NATO membership and given a pathway into the European Union. All of this has slowly begun to change under Erdogan, who attempted a Muslim-version of Trump-era populism, not to mention his rampant backing of Islamist militant groups in places like Syria, including overwhelming support for the Islamic State (IS).

Meanwhile Pakistan remains an important ally of Turkey, and the strengthening of ties between the two nations has steadily increased over time. It seems unlikely that this will change in the near future, even if the Gulf States succeed in their plan to scale back on Turkey and counter Erdogan’s reach. After all, Islamabad has been improving its ties with Saudi Arabia, receiving heavy sums of money in a recent visit from Saudi Crown Prince Mohammad bin Salman (MBS), with speculation that Pakistan would soon take part in the so-called Saudi-led Arab NATO and help counter Iran, and ultimately Turkey (which at the end of the day, is still a NATO ally).

If recent history has shown us anything, it is that Erdogan does not go down without fighting a brutal fight to the end. He has jailed thousands of teachers, judiciary members, lawyers, soldiers and the like, threatening that they will meet the guillotine. But perhaps it is time to start listening to the Turkish people, who are realising that Erdogan is not the great defender of Turkey’s national interests that he was when he first claimed major influence inside the country.

However, we may have to put up with Erdogan’s populist ideals for a little while longer. As Selim Koru wrote for the New York Times:

“Erdogan’s style of politics demand that he either crank up the intensity, or collapse under the weight of its own contradictions.”