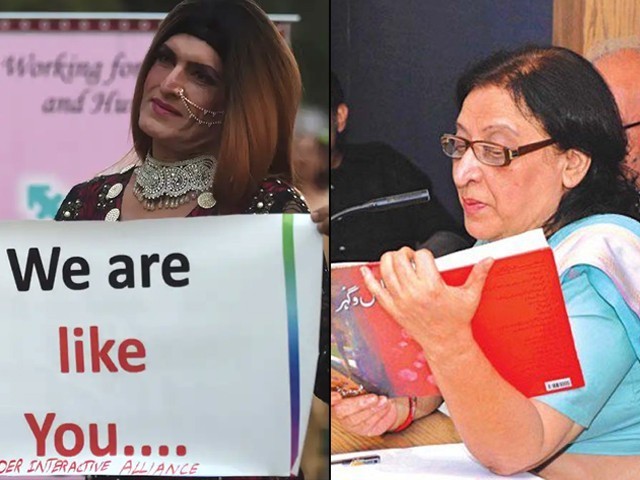 It is an interesting, even provocative reflection on how the roles, rights and responsibilities of the transgender have evolved over the years.

Today is the International Transgender Day of Visibility, one of only two days remembering and celebrating transgender people. Although transgender individuals have always been present in society, and have been mentioned in some of the oldest texts of the Muslim world such as The Arabian Nights, they have largely been the source of much mystique, ridicule and discrimination. Even in the 21st century, they have been among the last groups of people to get their rights, in legislation and otherwise.

Fahmida Riaz, who passed away last November, has expressed the plight of the transgender in her masterful poem, Hijre ki Sargoshi (The eunuch’s whisper), which forms part of her final collection of poems, Tum Kabeer (You, Kabeer).

The poem remains unique among the oeuvre of poems on the transgender community in Urdu, in that none of our leading feminist writers or female poets had written about a transgender person prior to this poem. It was written in response to another poem, Hijre ka Rajaz (The eunuch’s war song) and is an interesting, even provocative reflection on how the roles, rights and responsibilities of the transgender have evolved over the years.

I was motivated to translate this poem after attending a screening of Hammad Rizvi’s award-winning short film Rani earlier this month, which tells the story of the eponymous transgender woman in Karachi who sets out to take care of an abandoned child. I was particularly struck by a moment in the film when the lead actress, played by noted transgender activist Kami Sid, is attacked by some men on street, one of whom says to her,

“Why didn’t they kill you at birth?”

This original translation of Riaz’s powerful and lyrical poem attempts to explain and crystallise why.

What of me and my war song!

Holding a sword in my hand

I stood guard day and night

I was the palace guard

Where a bird dares not flap a wing.

There was a time

When this land was happily disposed

I was the special messenger of joy

No doubt the generation of my ancestor is severed within me

Which will become extinct

I am the fable of ‘brevity’ as opposed to ‘eternity’

So that is why

I always remained alive in the shadow of mercy, for all eyes

Nobody great or small dared to win my curse, even by mistake.

Now there is merely a noise here

Those whose sadness of mind and heart is evident

I hear their abuses

What even I can do!

I began to look towards the sky accidentally

I could see strong youth

With opened parachutes, in the air from afar

And among them two girls

Were they Her? Him?

Some began to lament and mourn

Of what use will be this beard, this moustache

Will men now become pregnant even

How will we be able to say male and female?

Will the damned now force the devout to utter Farsi!

And frightened the heart

Increasing confusion between masculinity and femininity

Majnun became a he, and Laila she

Then rushing to hit me saying,

‘Wretch! This is all your fault alone.’

I clap to bring joy to your heart

Then silently say just this much

The bedroom is not the only existence

Raise your gaze to see

How blue is the sky

I too can fly a plane in it

I too can descend opening a parachute.

What you keep repeating day and night

Have words lost their meaning?

Maybe you can see

In a being with a soul

The light of God.