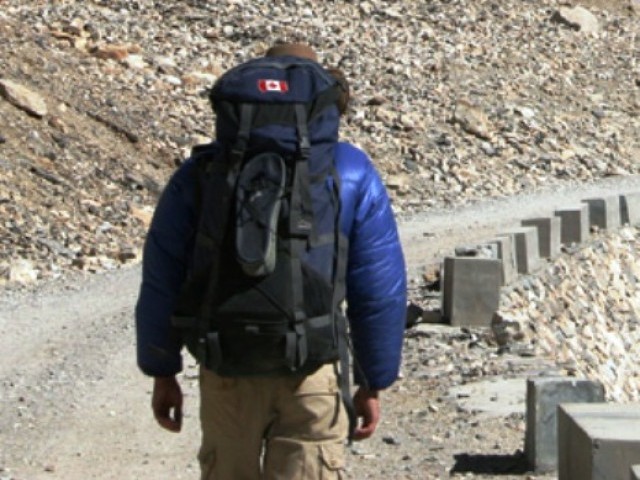 Any foreigner touring Pakistan is considered to be a spy as their status as a non-Muslim raises red flags.

A Russian walking past a crowd of Punjabis will hardly qualify as news in societies open to exchange of ideas and people. But television channels in Pakistan are used to treating foreigners’ presence in the country as breaking news.

On the afternoon of September 9, most channels reported the arrest of a Russian “spy” in Lahore with an undertone that a disaster had been averted. With hundreds of thousands of dollars having moved around in ad revenues and blood money following an American spy’s presence in the city, the September 9 report was all set to occupy prime time slots for several days. Only this time our spy stereotype was busted as Andrei Mikhailov turned out to be an innocent tourist waiting at The Mall for his host.

The Russian’s worry wasn’t just reporters and cameramen whipping up their audience into the frenzy of another foreigner roaming around unchecked. His was a double whammy, as a dozen or so Punjab policemen stood aiming their rifles at him until he was rescued from the scene by his host.

That a foreigner walking around alone cannot be taken by the police or the media as anyone but a terrorist or a spy says a lot about the extent of xenophobia in Pakistani society and our penchant for believing all kinds of conspiracy theories. Such behaviour has been a hallmark of societies where nationalism is used as a tool to exclude ‘others’ — be they Palestinian Muslims for Israel, European Jews for Nazi Germany or Indian Hindus for us — by portraying them as enemies.

The Pakistani state’s penchant for a national identity based on religion has left most people with little choice but to take most non-Muslims, prima facie, to be their enemies. With the exception of the Chinese whom the state publicly acknowledges as friends, we have perpetuated stereotypes for most major religions and communities. Hindus, Christians and Jews are commonly seen as scheming to break Pakistan.

As for poor Mikhailov, little did he know that he had belonged to a place presented to most Pakistanis during the Cold War as a country of dahriyas (non-believers).