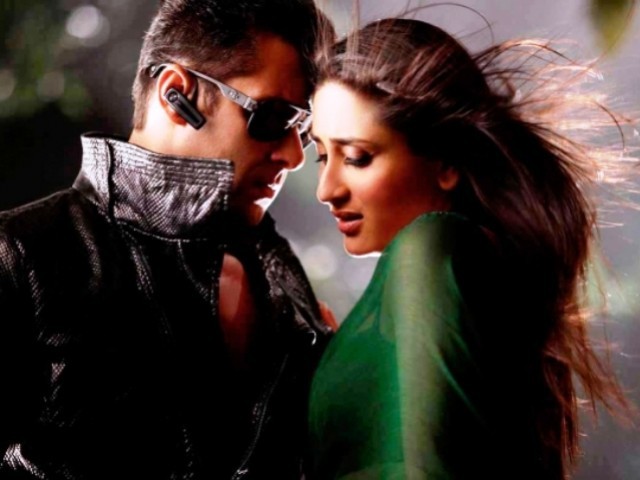 Kareena looks amazing and that is all she does in the film, apart from her sizzling on screen chemistry with Salman. PHOTO: REUTERS

Apart from sending the cash registers ringing, what do the films ‘Bodyguard’ and ‘Captain America’ have in common? No, it’s not the good looks or the brawn of its leading male protagonists Salman Khan and Chris Evans. Both films represent an avenger taking on the forces of evil and hatred and emerging triumphant, if a trifle bloodied, after a fierce battle. In an increasingly insane world, is it any wonder then that we are increasingly drawn to a hero who will vanquish our demons and ensure that peace and harmony prevail?

Actually I was dragged feet first to see Bodyguard  because I was convinced it would be a dishoom dishoom film with no lasting merits.

But it turned out to be nothing like what I had envisaged. Amidst the chattering desis in the New York cinema hall clutching popcorn and samosas, I came across breathless Nepali girls dressed in sequined ensembles which would not have looked out of place on screen.

As the film started, anticipation started bubbling forth even before Salman Khan appeared. When the police chief mentioned Salman’s intriguing name in the film, Lovely Singh, it started rows upon rows of excited giggles. Amidst whoops of joy, Salman then made his entry, piece by piece, the camera focusing on his nose, temples, sunglasses, lips et al, until finally the pieces composed into a wonderful whole. It was then that the women sitting up ahead suddenly speared the air in a remarkably fluid motion in order to snap photographs of the cine hero, thereby displaying a remarkable dexterity and speed akin to that of the flying dolphins.

Salman essays the role of a bodyguard and his first assignment is to rescue women who are about to be trafficked to distant cruel shores. Of course, our avenger beats up an entire gang of gun toting criminals and then swings open the fortress like door leading to the dungeon of the trapped women. As they rushed out helter skelter, shedding tears of joy and hysteria, past a smouldering Salman, one couldn’t help wishing that all abused women could have a Lovely Singh to rescue them.

All of Salman’s films totter at the seams with humour, but here the script is replete with politically incorrect jokes about little people and fat people. In to the latter category falls Tsunami Khan (Salman’s sidekick) who is the constant butt of jokes, much to the delight of the audience, including some ladies who couldn’t resist repeating some of the funnier dialogues in between mouthfuls of crunchy chips. Wild cheering greeted Salman’s signature dialogue throughout the film:

Kareena looks amazing and that is all she does in the film, apart from her sizzling on screen chemistry with Salman. In a one dimensional role, what else can the poor girl do? However, it has to be admitted that she does gyrate in sensuous saris, twirl dopattas, lean on Salman’s sturdy shoulders, sob continuously, giggle incomprehensibly and play the coquette to the core. Finally, she also lends colour and pathos to the Rahat Fateh Khan and Shreya Goshal chart topping number “Teri Meri Kahaani” which is truly a feast for the senses.

To give him credit, Salman has always been upfront about the merits of his films and true to form, in a post-release interview he said that the opinion of critics hardly mattered since it was four people in a population of one billion. He said:

“The aam janta goes to see a film jo unke mood ko theek kar sake. People don’t have the time or patience for heavy-duty stuff. They come expecting to have fun, the way they would if they went to a nightclub.”

No posturing about a “hat ke” film (different from the rest) from this icon.

However, Salman seems to have miscalculated because there are some critics who have responded positively to his venture. Influential film critic Taran Adarsh gave a score of 4.5/5 and said:

“Bodyguard works for varied reasons – it has a simple, but captivating story with a dramatic twist in the tale, the chemistry between the lead actors is perfect and the music is well juxtaposed in the narrative. But its biggest USP is, without doubt, Salman Khan. He carries the film on his broad and brawny shoulders and that alone is the imperative reason for watching this film.”

Komal Nahta gave it a rating of 4/5 and wrote:

“Bodyguard will prove to be hit because of Salman Khan’s performance.”

Not surprisingly, Bodyguard is a blockbuster and has had the highest grossing first week in the history of Indian cinema. Undoubtedly, Salman’s understated demeanour, innocence and sincerity prove to be rather endearing in the film. His nervousness while speaking to Kareena, his excitement at their rendezvous, the tremor in his voice as he talks to her on the phone and his constant attempts to look trendier to win her over is rather sigh-worthy. But the best is still to come. In the final fight sequence, as Salman battles to save helpless Kareena from the disconcertingly kohl eyed Aditya Pancholi, our hero comes in front of a gushing spring of water which splatters on to his manly chest. The force in this water is so overwhelming that it actually manages to pop open all the buttons on Salman’s tight black shirt. One sight of his bare muscled chest and the hall exploded into awed screeches, wolf whistles, and screams galore as everyone leaned forward to get a better look at this man made miracle.

The wise cracking and rucksack toting guys next to me were breathless with anticipation as they watched the action sequences with glee and laughed knowingly when their hero pulverized all his opponents. But as the romance between Salman and Kareena waxed and waned, they started growing restless. Finally, one of them couldn’t stomach the growing love vibes any longer and burst out:

“Yaar, kiya taarture hai yeh romance womance! (What a torture is this romance!)

As the film hobbled to a maudlin ending, their patience finally ran out and they beat a hasty retreat before the credits rolled.

Masala entertainment to the core, Bodyguard has to be seen on the big screen so that its fitful charm remains untarnished. Another film which can only be experienced in a cinema hall is the compelling Captain America: The First Avenger.

After being deemed unfit for military service because of his frail physique, lion-hearted Steve Rogers (Chris Evans) volunteers for a top secret research project that turns him into Captain America, a superhero dedicated to defending America’s ideals during the Second World War. Ironically, the superhero character Captain America was actually written in the 1940s as part of a PR effort against the Nazis. An unabashedly patriotic creation, Captain America was Timely Comics’ most popular character during the wartime period.

When asked if he wanted to kill Nazis that badly, Steve Rogers says that he isn’t driven by blood-thirst, but rather by a need for justice. The film has an underlying message that character and patience is as important as strength or authority, a lesson that our present day statesmen could well imbibe. As the scientist Dr Abraham Erksine (Stanley Tucci) says when Rogers asks him why he was chosen for the project:

“Because a strong man, who has known power all his life, will lose respect for that power. But a weak man knows the value of strength and he knows compassion.”

After his own transformation is successful, Rogers dons the red, white and blue Captain America costume to become a symbol for the Allies as comic books and TV spots starring him are produced. But soon his services are needed to rid the world of the evil Johann Schmidt/Red Skull (Hugo Weaving) who has attained super-powers thanks to the same magical serum that Dr Erskine had injected in him earlier. With a band of trusted men, he then embarks on a mission which pits him against Schmidt and his columns of armed and dangerous lieutenants.

With a colour scheme that evokes sepia and newsprint, the movie is nostalgic and engrossing in turns. The digital enhancements and special effects reel you in step by step. One can’t help cheering for the underdog, the emaciated Steve Rogers, and when he becomes the powerful Captain America, it is sobering to realize that he hasn’t forgotten that he is still that little guy from Brooklyn. Chris Evans shines in his role of the shield throwing Captain America, lending it depth and gravitas while Tommy Lee Jones, who plays the skeptical Colonel Chester Phillips, is as brilliant as ever. Hayley Atwell as the red lipped Agent Peggy Carter manages to stand out in a film dominated by muscle and testosterone – no mean achievement.

What was noticeable was the almost pin drop silence with which a packed house saw this roller coaster of a film. When the credits rolled, not one person left the hall which meant that I couldn’t leave either since I was stashed to the side with three rather large Americans spread out over the aisle seats. Once the film rolled to a halt, the reason for their inability to stir became obvious. There is a rather riveting epilogue to the film which I shan’t be a spoil-sport by giving away.

Good versus evil… it is a concept which has always fascinated film makers and audiences alike, but in today’s fractured times it has become even more pertinent. If a police force or an army is unable to root out hydra headed evil, perhaps it’s time to look to super heroes from amongst us. Captain America or Lovely Singh, anyone?