Don’t invite child abuse victims if you can’t be sensitive or respectful towards them, HRPC 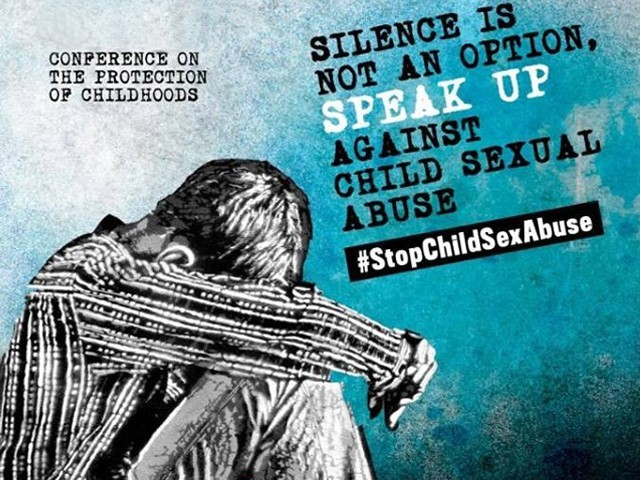 On display was the lack of skilled approach, and absent training which is required to deal with victims of sexual abuse, especially children. PHOTO: POSITIVE PAKISTAN

I was in attendance at the ‘Conference on the Protection of Childhoods’ that was held on March 17, 2019, at Al Hamra Hall, Lahore. The first conference of its kind held in Pakistan, it was organised by Human Rights Protection Centre (HRPC) and Positive Pakistan.

On paper, the conference was supposed to provide a platform for change and awareness for the public on child sexual abuse. The panel had acclaimed media personalities, government officials and even a retired justice from Australia, Dr Robyn Layton, who has spent all her life working for child protection and women and children rights.

On paper, it was about providing a voice to the adolescent victims of sexual abuse, who were attending the conference with their entire families on the invitation of the organisers. Majority of these families belonged to the Kasur region, which had been thrusted into the spotlight as a hotbed for sexual crimes against children, including a pornography ring busted in 2015 and the case of Zainab Ansari, a young girl who lost her life at the hand of a serial rapist. According to HRPC’s founder, Barrister Hassaan Niazi, these families were guests of the organiser and were provided transport to the venue as well.

In reality, however, the conference was a clear picture of the disconnect that exists between the common man, those who claim to be their champions and decision makers. On display was the lack of skilled approach and absent training which is required to deal with victims of sexual abuse, especially children.

As an ordinary citizen sitting in attendance, I was appalled by the ill-prepared approach of the HRPC team, the chief organisers of the session and the lack of sensitivity shown by the moderators as well as some of the presenters.

Child sexual abuse is a sensitive topic, with victims of sexual abuse and survivors already attempting to come to terms with their new reality in a society where all facilities of mental care and a decent support system are still not common place. They are already vulnerable to further exploitation and their emotional health is fragile. Even if that wasn’t the case, the fact that they are children should have been enough to cause outrage at the conference.

I would like to bring to your attention the following very unfortunate shortcomings that took place that day.

1. Most of the audience present were survivors of sexual abuse and their families belonging to Kasur. They are not fluent in English and even have difficulty understanding Urdu, yet nearly the entire moderation of the event and most of the content was delivered in English.

Imagine being asked to attend a conference where the victims are being talked about, yet they don’t understand any of it and remain seated for five hours or more. Imagine going home being none the wiser and without having any questions answered or any guidance provided that would have helped them in their cases or daily lives being discussed by the numerous panels. I can assure you they don’t know what DNA or dark web means. The content for the conference was addressing the handful of people in the front rows.

The organisers should have either made the content specific to helping the victims and families in a language they could comprehend, or not have invited them at all to lend authenticity to their platform. On a lively prompt by an audience member, they tried to remedy this on the spot but with no success.

2. The first panel included three adolescent victims of sexual abuse on the stage. The moderator, in lack of sensitivity, introduced the second victim by saying:

“Now I invite Waleed to say a few words… or whatever.”

I can assure you the teenage boy didn’t understand the prompt, but does that mean it is acceptable? I cannot un-hear it till this hour, and it shows an utter sense of disconnect and apathy by the organisers for the very children they are claiming to support and defend. I am positive that you, as readers, do not disagree with me on this.

3. The DG of Forensic Lab presented his slideshow and lecture, which contained unpixelated images of the abuse victims, including imagery of the murder scenes and more than one image of the body of child victim Zainab herself. This happened with children and teenagers, actual abuse victims in the audience making up at least half of the viewers, if not more. I ask you, is this acceptable anywhere in the world?

One of the slides contained information about Kainat, a child victim who was actually in the audience with her family. Imagine what would have gone through her parent’s mind, if they had understood the language, being asked to sit through the trauma again? The slide contained comic jokes about forensic investigation procedures, and it was apparent the presenter had not looked at the slides beforehand nor was personally responsible for preparing it.

The organisers should have looked over the content themselves to ensure it met their requirements and was reasonable to be viewed by children.

4. A nine-year-old child, who had attempted suicide after facing abuse, was in the audience. He was prompted to stand up, again and again, to drive home a point that he has now promised he won’t attempt suicide again because he is a hero. This is not how you provide the spotlight to a survivor, who is unable to say no. Have you ever seen or heard children of abuse being addressed like this, where they are identified to an entire hall of strangers as a victim of sodomy/rape (words used by the moderators excessively) and more?

I am beyond words. This is a clear indication of the lack of training required for dealing with child victims of abuse, and abuse victims in general in Pakistan. The infractions continue, such as more than one panel member saying the fault lies with the parents, and that there is nothing they can do about incest which happens at home.

I assure you, this blog would be very long if we were to address all of them. Perhaps I am wrong in my indignation. What does it matter if the victims didn’t fully understand what transpired, or if they couldn’t do anything about it? Some will say it is the first time this conference was held, the organisers will learn. But I don’t think that on a sensitive issue such as child abuse any lapse of preparation or show of apathy or disconnect from the abuse victims, whether they can understand it or not, is tolerable.

The panel was full of people who should have known better, especially since they are in positions of power and/or have some responsibility as police and law officers. Therefore, this simply won’t do. Mediocrity won’t do and I sincerely hope I am not the only one who feels this way.

I approached Barrister Niazi via phone call last Monday to highlight the very same issues. By the third question, I received the response,

(Why don’t you conduct it yourself then?)

This is a typical response from anyone in our country, unfortunately, who is questioned about their shortcomings. I am not the organiser. I am not the person who is using this platform to highlight their organisation as the advocate of protection of human rights and justice for child abuse victims. HRPC should have done better, or not have conducted this conference at all.

The writer is a health care professional who is interested in history, positive social change, writing, and photography.