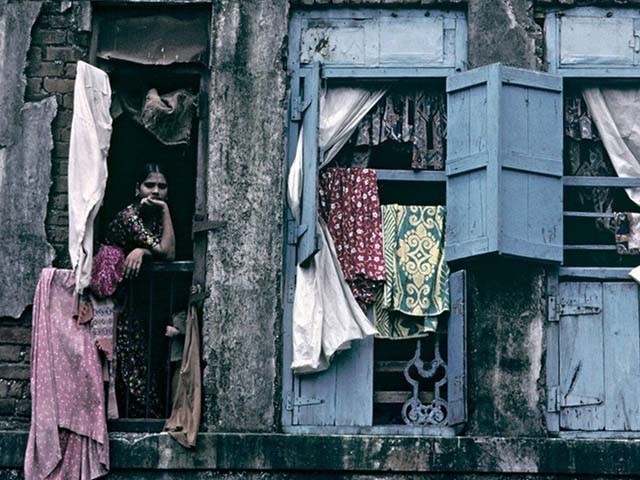 To her, these streets and everything else of the outside world was a distant dream. PHOTO: GETTY

The sky was a pool of black ink, dusted with stars at midnight. Arsh looked out from the window — she saw many little streets sprawled out below. She had only known these streets from inside the walls of her room. She had never walked on them. She had never been under the open sky. She looked at these streets longingly. To her, these streets and everything else of the outside world was a distant dream.

Arsh was thinking about him. He came again tonight. Her caramel skin flushed bright pink as he folded her into his arms. Her heart fluttered as his fingertips grazed her bare skin. She had never felt so close to a man before. Over the years, many men held her, touched her, felt her — but he was different from all the others. She fell in love with him.

As she stood by the window and watched darkness engulf the sky, she decided she’d tell him what she felt for him. Maybe he’d take her away somewhere far. Maybe he’d relieve her of this life.

Overhead, a star blinked in the dark sky, as if telling her it was time.

The morning sun filled the brothel. It was bright inside. Arsh slipped into plain white clothes and went downstairs.

“Arsh!” Farnaz called, with a cigarette clenched in the corner of her mouth. “You look happy! I’ve never seen a bigger smile on your face.”

“I’m going away,” Arsh said in low voice, so that nobody else could hear.

Farnaz laughed. But then her eyes were suddenly wide with concern, and her skin shone pale under the gleam of sunlight.

“You know you can’t go away,” Farnaz said quietly.

Arsh smiled in reply and bustled away.

The rest of the day, she was tangled in her thoughts. She didn’t even know his name but she knew he was the one who’d save her. The world glittered with promise.

“Take me away!” Arsh whispered into his ear.

There was a steely glint in his eyes.

“Please take me away!” Arsh’s voice crackled at the edges.

He slapped her so hard her teeth rattled.

Arsh swallowed everything else that she had to say. The words dried up in her throat.

It was near dawn but Arsh was wide awake. She looked into the mirror, her dark eyes sunken in an ashen face, stared back at her. Her lips were stained in a dark, blood-like red. Her hair, black and velvety like the sky at midnight, carelessly tumbled down her back. Her angarkha, heavily embroidered in gold and silver threads, danced around her when she moved. ‘A whore,’ she thought.

She felt sparks of resentment cascading in her as she looked at herself. She felt angry. But then her anger melted and she started crying. And as a tear caught in her lip, she realised her lipstick was smudged at the corners.

His words filled her head. They were sharp, piercing—they cut through her like knives. Even after he left, the word ‘whore’ twisted inside her. It crushed her. It tinted her entire existence. It was a small word but it encompassed a bitter world — a whore’s world.

Arsh had endured years of abuse. There were different men in her bed each night. They treated her like an object. They used her and then discarded her. She was perceived as an unthinking, unfeeling being. Her existence only sparkled in the dark hours of the night. They forgot she was human too.

She looked at the faded sky from the window. She spread out her hand towards the sky, trying to reach for it. It was close but far away. Maybe just like the man who she thought would save her.

Khudkushi (suicide). The word echoed against the big, bare walls of the brothel. Its weight settled on all women who lived inside. It grew heavier and heavier, thicker and thicker, folding them in, needling them all over. It hung in the air, sharp and poisonous. ‘Khudkushi,’ they murmured in small voices, afraid not to say it out too loud. They didn’t want anyone else to hear. A silence spread in the brothel, full of fear and anticipation. It was suddenly dark inside, and empty despite the people. Outside, the day shifted from morning to night. And the air smelled of earth and ash and rain. And faintly of death.

Arsh took away her life. She cut her wrists and bled to death. For her, death wasn’t just an end—it held meaning. It meant freedom. It meant floating somewhere far, untethered. It meant relief from a corseted existence.

Khudkushi became Arsh’s freedom. She finally fled from a life she did not want to live.