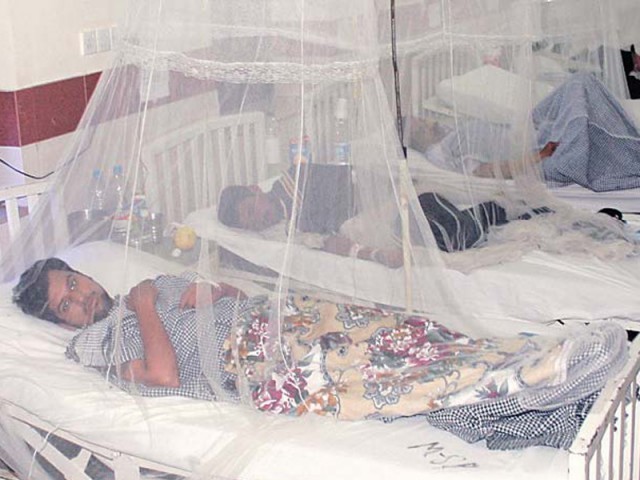 The Health Department has failed to curb the mosquito due to which people are living in terror of dengue. PHOTO: EXPRESS

As monsoons arrived in 1857, Ghalib wrote to a correspondent:

“Now that rains have been mentioned let me just say that [Delhi has witnessed in quick succession] a rebellion by the black, an assault by the white, a testing time of demolition of houses, a crisis caused by epidemic and a calamitous famine.”

Our own season of abundant rains this year looks like a fair match. Briefly: a treacherous campaign by terrorist suicides, a quake called Zulfiqar Mirza, a crisis called target killing, a dengue fever epidemic and a calamitous rain.

To be fair, the terrorist suicides are by now part of our routine. Most of us have accepted these as a fact of life. The only recent escalation in this regard has been the greater focus on school-going children. Perhaps the idea is that the education they get can only lead them astray. No harm therefore in nipping the evil in the bud.

As for Zulfiqar Miraza, he has truly shaken the country. In a play on his first name, somebody suggested that Dr Mirza had proved a double edged sword. Our own Khaled Ahmed, however, says the legendary sword attributed to Hazrat Ali had a single blade. Dr Mirza, for his part, has no time these days for such scholarly stuff.

Target killing, for now, is limited to Karachi. Stormy rains, however, are not limited to the city but have also affected the rest of Sindh. The brunt of dengue fever, on the other hand, has so far been borne by Lahore. There are signs, however, that the epidemic is unlikely to be content with a city or a province. It’s on a roll and knows that there is very little from Lahore to Karachi and from Karachi to interior Sindh to stop it in its tracks.

On a personal level, people are alerting one another about the hazard. The nemeses nature produces – mongoose for cobra, ants for elephant, mosquitoes for man – are amazing.

What thoughtful individuals are doing for their friends in the circumstances is much more remarkable than the official arrangements to contain the outbreak. Ataul Haq Qasmi, for one, has sent me a bottle of papaya syrup to protect me from dengue harm. With the entire populace at risk, so many already infected and others shuddering at the prospect, I wanted to know, how many people can he help in this way?

“You are at greater risk,” he reminded me. “A second infection can be life threatening.”

The first was two years ago, the ideal time for dengue fever patients. Governance was still not so ‘challenged’ as it looks today. The dengue centre I went to was not so crowded. The staff welcomed me and seemed grateful that there finally was a dengue patient to justify their assignment. Within three hours I had been diagnosed with dengue. The prescription helped me tide it over in four-five weeks.

Gone are the days. Despite many warnings, the authorities, particularly the Health Department, have failed to curb the mosquito. Today we apply lotions to hands and faces, spray our homes, drink papaya syrup and in general live in terror of dengue.

Well, here is potentially an easier way out. The carrier mosquito, we are told, is a hygiene freak. It hates filth and squalor and seeks clean, clear, placid water for its colonies. Actually, I think, I have finally stumbled on the idea behind the no-cleanliness strategy of our sanitation departments. There may indeed be a point to avoiding cleanliness at our homes as well.