Why did our political talk shows turn into a nightly circus? 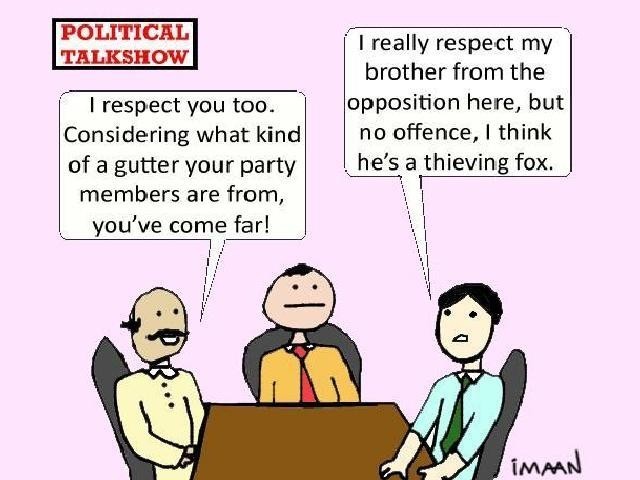 The same old formula of bringing a representative of every political party into one screen space for a dog fight is put in place. ILLUSTRATION: IMAAN SHEIKH

As the sun sets in the evening, news anchors start to gather their crops for the circus to begin. Different channels, different names, different logos but the same concept: four boxes occupying the corners of the screen with unprofessional individuals locked inside them, alongside an anchor who holds the whip to control their interactions.

This is the prime time to learn about the ethics, morals and values (or lack thereof) Pakistani society portrays each day during the peak hours of screen time.

Broadcast media loves to be the moral police of society in Pakistan, but what it does during peak hours every night for a few extra dimes is nothing short of disgusting. The same old formula of bringing a representative of every political party into one screen space for a dog fight is put in place. The anchors have mastered the art of knowing when to provoke and blow the audience away with immorality on display from every corner of the screen.

This isn’t about which party members are to blame, because every party’s so-called media personnel has the same qualities: rudeness, unprofessionalism and immaturity. Trust me, this wouldn’t even offend any of them because they embrace these qualities with full consciousness. The moral fabric of society is so torn that anyone who can shout louder, be more stubborn and throw inappropriate comments on screen is the real champion.

The circus sets in at around 7pm, with one political show following another. The anchors take their seats with nice suits and ties but equally poor ethics. Of course there are exceptions, as a few do practice actual journalism, but the majority is out there hunting for ratings, and for the sake of ratings they will do anything. The anchor proceeds to introduce the participants of the show, who have probably been introduced earlier in the day for their performances elsewhere, but here they are again to ruin another evening for viewers of another channel.

From an abundance of serious problems facing Pakistan to choose from, including water scarcity, economic debt, extremism, gender inequality, honour killings and what not, the discussions of the so-called ‘political’ talk shows mostly revolve around the three pillars of Pakistan: Nawaz Sharif, Asif Ali Zardari and Imran Khan. Everything outside these three egos is irrelevant.

Hoping to see any sort of productive discussion that can lead to some good from these shows is a fallacy. The participants are not there to discuss the issues of the 220 million people of this nation; they are only there to show their unprecedented loyalty to their leader. As the anchor starts to build a debate with questions flowing in and out of every corner of the screen, each participant takes turns to prove that their leader is godly – he can do no wrong.

In Pakistan, one of the first values you learn, as evidenced by these ‘representatives’ of the public on TV, is that you should never admit your mistake. Admitting your fault is a sign of weakness, no matter how propelling the evidence or argument against your party may be, you must shamelessly defend it because that will make your leader/manager happy.

As the show progresses, the anchor knows enough eye balls have tuned in to the channel that it’s time to raise the temperature in the room. Ever so slightly, the anchor pursues the game of allegations while allowing some crosstalk to take place between the candidates. Once the participants seem warmed up, the anchor throws in a topic that puts two candidates from opposing parties at a direct face-off.

This is when the anchor takes a back seat while we see embarrassing behaviour from two boys in grown men’s bodies on live television. This is the peak moment of the show, the one that will be cropped and run in advertisements to build anticipation in the audience for upcoming stupidity after a short break.

The post-break session only goes on to prove that competition hasn’t brought about any innovation in the Pakistani media industry. If anything, it has only pushed political shows to further challenge the boundaries of morality by inviting individuals who carry a reputation of causing havoc on set, with abusive language being the mother tongue for discussion.

While the media across different countries reports on the upcoming technological trends such as big data and artificial intelligence, trends that are reshaping our future, we are still stuck in an era where the night begins with,

Why is there an abundance of meaningless political shows while the market for arts, science and sports remains vacant? One explanation that comes to mind is that it’s harder and more expensive to make quality content but easier and more marketable to place an anchor on a massive set and invite three guests from each mainstream party who wouldn’t have been doing much during their ‘work hours’ anyways.

A few journalists have deviated from this ugliness and tried to make shows that are somewhat different or at the very least, civilised. However, the bulk of Pakistani shows still revolve around the same circus that has been entertaining households for the past decade. Numb your brain and keep watching these political shows, but at the end of every episode can you please ask yourself: what did anyone gain from watching a group of political workers proclaiming their loyalty to their majesty at the expense of your time?