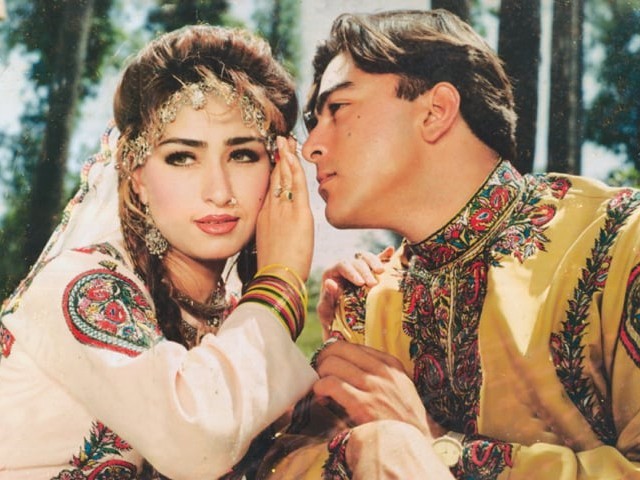 Has Shaan Shahid forgotten the kind of movies he has done that have added further fuel to the already heavily sexualised male gaze? PHOTO: GUDDU FILM ARCHIVE

For as long as Pakistanis can remember, Shaan Shahid has been a staple of Pakistani cinema. In the past, he was that guy in every Punjabi movie, and post-revival of Pakistani cinema, he became that guy who always ends up playing the patriot. While Shahid deserves respect as one of the most prominent actors of our film industry, his Twitter account has made it hard for us to respect much else about him.

Some context: just like last year, Aurat March was held on International Women’s Day this year as well in many cities across Pakistan. And just like last year, we once again saw a lot of anger and backlash at the gall of women to hold placards. Why important women’s issues were not mentioned (they were), why women from all strata of society were not present (they were), why they were going against our culture, and so on. Many were offended and triggered by women getting to occupy public space freely without fear, and Shahid proved he was one of them. Unsurprisingly, he took to Twitter to express his distaste for the placards at the Aurat March.

These slogans do not represent our culture ,our values and the respect we have for our women that was my point .. and you missed it completely.. pic.twitter.com/9jaCSHnRUG

The debate over the placards is a big one, and beyond the scope of this piece. What came as a shock to us was not a man lecturing women on what is and is not appropriate, but the fact that it was Shahid who was doing so. Let’s address all of Shahid’s issues with these placards one by one.

His first argument was that these slogans do not represent our culture. We do not need to add anything here; this collage of scenes from the movies Shahid himself has done in the past will perhaps accurately represent what our culture really is. We’ve all seen one of Shahid’s movies at some point or the other – sometimes to make fun of them, let’s be real – but it has not escaped anyone’s notice that these films are heavily sexualised and do not pull back any punches when it comes to objectifying women. While Shahid tries to bring up morality to silence the women who bravely took to the streets, he has forgotten the kind of movies he has done that have added further fuel to the already heavily sexualised male gaze. 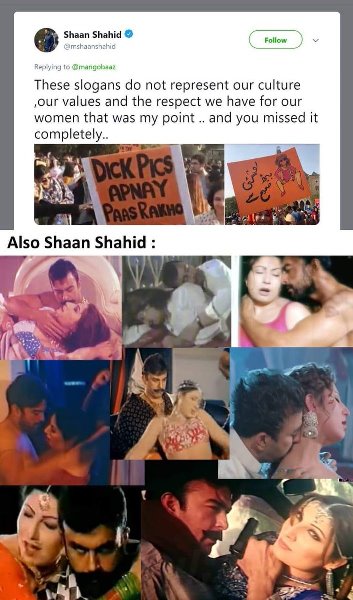 When someone on Twitter pointed out the hypocrisy and sheer stupidity of Shahid’s argument, he was quick to get defensive. He questioned where his freedom of expression is, and irony died a painful death. After experiencing literal subjugation in Pakistani society, Shahid still does not think women should be this angry. But being called out for his questionable choices in the past, he is quick to remember that people are free to do and say as they like, as long as they are not harming anyone. And apart from the shots fired at the male ego, the placards at the Aurat March were harmless.

You can’t comment on actors you aren’t one , what choices they make are needed for the professionalism they represent .. where is our freedom of expression .. ? Who made you the judge jury and a khatmal actors have rights to learn to respect others profession..

Shahid also thinks a non-actor cannot comment on movies (film critics need to start looking for new jobs), but for some reason still believes his opinion on the Aurat March should hold value? By his own logic, as he is not a woman, he does not get to say what is or is not appropriate. Who died and made him the King of the world? He earned his fame and wealth from exploiting women’s bodies and sexuality in movies and now has the gall to point fingers when women are reclaiming public spaces? That’s utterly hypocritical!

#Ibelieveinauratpower if I didn’t believe in the March I wouldn’t support my wife& daughter going to it. they were at the venue holding play cards ,my fathers song was sung at the March in lhr ,but they left .they also felt that some words could have been written differently .

His second argument was that these placards do not represent our values. Remind us, what are our values? Ensuring women do not have any liberties? That they stay inside the house, for when they come out one day of the year, their very existence is perceived as a threat? Do our values move beyond telling women what they can or cannot do? You may not like what the placards said, but please acknowledge that just because something does not fit in to your values, does not mean it doesn’t matter and should not exist. Women being sexually abused and exploited on a regular basis is an active part of our values that Shahid can live with, but talking about it is where he draws the line on ‘vulgarity’.

Lastly, Shahid suggested these slogans do not reflect ‘the respect we have for our women’. One wonders, what respect is he talking about? Pakistan is one of the worst countries in the world to be a woman. We are all physically unsafe – we literally cannot go outside to buy milk without fear. We are economically dependent, politically isolated. We are angry, and the one day we get to vent our frustrations and injustices, Shahid wants to talk about the respect women literally do not see anywhere around them? If the options are between a Pakistan where Shahid thinks women are respected and one where women actually feel safe or are respected, we’ll take the latter please, thank you.

It’s easy to have an opinion on the Aurat March, but if you are not a woman and the slogans do not represent your lived experience, please show how you respect women for just one day of the year by shutting the hell up. Shahid talks about how he respects the Aurat March, but if he cannot respect the different facets that exist to women and their freedom to express themselves, then he doesn’t really, does he?

Women are allowed to march here, as long as they stay within the lane. But if we do not expect anything radical from women marching, why march at all? Without knowing the context of these placards and the stories behind them, and without going through what women go through in Pakistan every day, if you cannot even give us one day to just be, maybe it’s time we reevaluate our culture and our values. Because men have that freedom everyday.