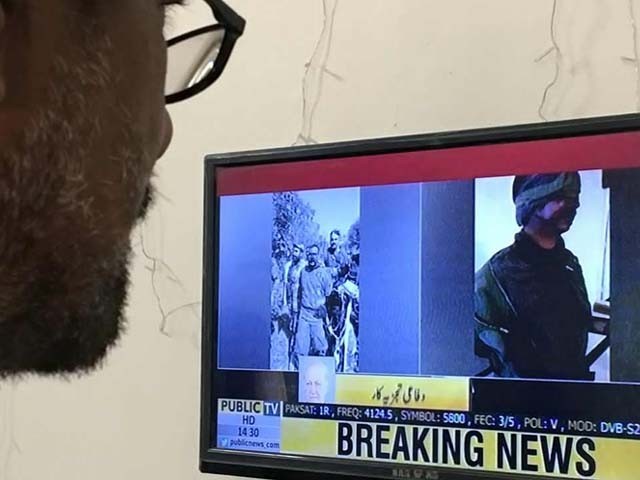 Anyone who speaks up against war is not a traitor or an unpatriotic anti-nationalist. PHOTO: REUTERS

Our national identity, stemming from the word ‘Pakistani’, represents far more than just our citizenship. It runs in our blood, it is our life and we are willing to die for it. Twitter and Facebook are full of patriots who are at the frontlines of our social media war with India, but are we prepared to face the consequences of a real war which is imminent on both sides?

Of course it is easy for us to say we can beat India, while sitting in front of television screens in the comfort of our homes. But war implies the death of countless men. War makes people suffer, makes cities burn and leaves children orphaned.

War is not a joke or a game. Ask the children of Afghanistan, the mothers of Syria, and the wives and daughters of Palestine. We tell ourselves we’re strong enough and that we have one of the “best armed forces in the world”. But we do not think about what will happen once the war begins. In the words of Neville Chamberlain, the former prime minister of the United Kingdom:

“In war, whichever side may call itself the victor, there are no winners, but all are losers.”

If we had historically resorted to war every time a militant organisation carried out an act of terror, the subcontinent would have been a pile of ashes even long before its partition.

Pakistan is a strong nation and India does not deny this. Among many other things, Pakistan is a country bound together by religion – a bond that has remained unbreakable for centuries.

Throughout all the years of Pakistan’s statehood, India has made several attempts to shatter this strength. On all of these occasions, Pakistan has shown that it is more than capable of defending itself.

After the current state of affairs following the Pulwama attack, our dearest neighbours again made the mistake of underestimating us. Now, Pakistan is like an angry bear ready to pounce and India is the fool ready to poke Pakistan one more time.

Pakistan has made a show of good faith to India, but apparently their leadership is too consumed by the idea of power that they fail to see what this war will do to their own economy let alone the entire region, should the situation escalate to that.

The delusional lot of the Indian establishment seems to think that they have suffered significantly over the years due to terrorism facilitated by Pakistan and that war is now the only option left. Pakistan has repeatedly offered India a peaceful dialogue, in order to resolve the current situation. Our current administration has extended a hand of friendship to India since day one. Yesterday, Prime Minister Imran Khan was quite clear on where Pakistan stands against the threats by India, and even after two Line of Control (LoC) violations in a span of two days, we are still offering to sit and negotiate.

Indian Prime Minister Narendra Modi, on the other hand, is in a tough spot this election. He is willing to sacrifice his soldiers just to bag some votes. If the current situation is just about winning elections for Modi’s Bharatiya Janata Party(BJP), then the two attempts already made should do the job. The thirst for war that resides in BJP and its followers should be quenched by these attempts. They should stop poking the bear while there is still time.

PM Imran has also announced that the captured Indian pilot will be freed as a “peace gesture”, further strengthening our stance for better relations with India. Just how many gestures of peace will it take to show the world and our neighbours that we do not want war, that our nation does not want war and that the world certainly does not need another war.  All we want is peace for India, Pakistan and Kashmir.

Pakistan has supported the ‘War on Terror’ in every possible way throughout the years, whether or not the international community accepts this: Pakistan facilitated the US with its intervention in Afghanistan shortly after 9/11, and even tolerated American missile and drone attacks in its lawless Federally Administered Tribal Areas (FATA), all for the sake of being at the forefront of fighting terrorism within its borders.

In fact, Pakistan is the only success story in the world in the war against terror, according to DG Inter Services Public Relations (ISPR) Major General Asif Ghafoor, a war that spanned for two decades.

The people of Pakistan have never felt safer, so of course this presented an ideal opportunity for non-state actors to instigate conflicts within the country. India had literally been waiting for such an opportunity and after the Pulwama attack, they did not think twice before putting all the blame on Pakistan.

WWI started only because of an assassination. Keeping this in mind, a militant-led suicide bombing and a retaliatory breach of the LoC is more than enough reason for Pakistan and India to go to war.

Our country needs to focus on the problems prevalent within our internal affairs if we are to be influential in the world. We cannot afford to enter into a war that might make us sustain our borders but lose country and people simultaneously.

It has taken us nearly a century to reach a point where Pakistan is ready to enter into strategic relationships with the developed world. The world has a certain perception of what Pakistan is – a land characterised by religious extremists and illiterates, ruled by corrupt elites.

The recent undertakings by the Tehreek-e-Labaik Pakistan (TLP) show just how much support such organisations have and how little they care about the success of Pakistan. But our job is to not let this perception become the whole truth.

Anyone who speaks up against war is not a traitor or an unpatriotic anti-nationalist. This is not the Game of Thrones. This is the real world, with real countries and real life soldiers, living in the 21st century. Winning wars will not buy us international influence, but socio-cultural and economic diplomacy just might.

A law graduate from LUMS. Aspiring writer and activist. Currently working as in-house counsel in Fatima Group. She tweets at @ghauri95.