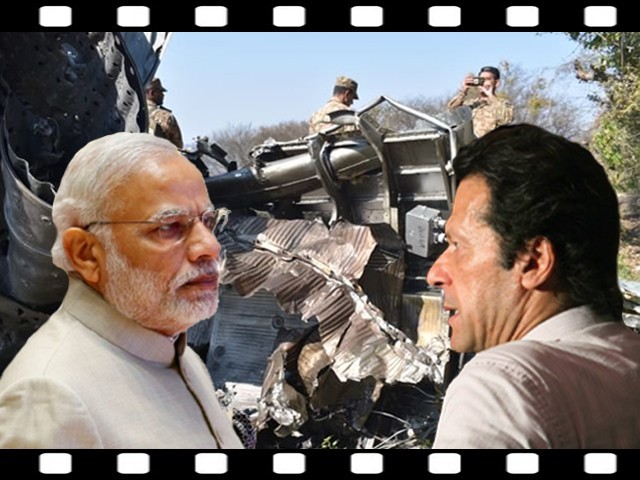 In the early hours of February 26, 2019, India thought that it pulled off an infowar coup by pretending to have carried out a ‘surgical strike’ against 200 to 300 Jaish-e-Mohammed (JeM) fighters in Pakistan. However, this vote-grabbing stunt by Indian Prime Minister Narendra Modi completely backfired on him after Pakistan turned this latest Bollywood flick into a reality by defending its airspace and downing two Indian MiG planes that violated the Line of Control (LoC).

The movie that came to life

The hottest Bollywood flick in the world right now is ‘Surgical Strike 2.0’, which is a big-budget and high-stakes sequel to its predecessor that India claims to have carried out in 2016, that too with no evidence either. The author wrote about this in his piece titled ‘Surgical Strike 2.0’ Or Big Bollywood Spectacle?, which compared India’s lies about a second ‘surgical strike’ to a re-election movie by Prime Minister Modi. The Indian prime minister hoped this would amount to an infowar coup that would simultaneously boost his own nation’s international ‘prestige’ while denigrating Pakistan’s. It was predicted at the end of that piece that “like all Bollywood productions, ‘the show must go on’, but the ‘surgical strike’ series won’t have a happy ending for India” after Pakistan promised to retaliate “at a time and place of its choosing”, which is exactly what happened the next day.

Pakistan downed two Indian MiG fighter jets that violated the LoC and even managed to capture a pilot who was recorded on camera as proof against India’s original fake news assertions that it didn’t suffer such a humiliating military defeat. Speaking of false claims, India says that it downed a Pakistani F-16 that violated its airspace. Yet, just like it bragged about killing 200-300 JeM fighters in its ‘surgical strike’ without presenting any evidence whatsoever that anything other than a few trees were destroyed (and even those were targeted accidentally after its jet released its payload), this too is fake news intended to deceive the domestic and international audiences.

What actually happened on the morning of February 26th is expectedly much different than how India is portraying it.

Indian Captured Pilot. Wing Commander Abhi. Pakistan Army will look after you as a professional Soldier because we stand for Peace. pic.twitter.com/0PfuR45UUB

Islamabad acknowledged in an official press release that it retaliated tit-for-tat by striking non-military targets in Indian-occupied Kashmir (IoK) in order “to demonstrate [its] right, will and capability for self-defence”, not to escalate the situation. It also hinted at carrying out actual anti-terrorist ‘surgical strikes’ against the Indian-backed terrorists participating in the hybrid war on China-Pakistan Economic Corridor (CPEC). It declared that

“If India is striking at so-called terrorist backers without a shred of evidence, we also retain reciprocal rights to retaliate against elements that enjoy Indian patronage while carrying out acts of terror in Pakistan.”

Statement by Pakistan Foreign Office against Indian aggression towards our sacred homeland.#PakistanStrikesBack pic.twitter.com/u2xbEIlWdZ

Had India’s elected leadership and its military, intelligence and diplomatic bureaucracies (‘deep state’) not fancied themselves starring in a Bollywood film and took Pakistan’s words seriously, they wouldn’t have even staged ‘Surgical Strike 2.0’ after Islamabad promised there’d be a response should that happen. But regrettably, New Delhi decided to escalate tensions even further.

Instead of letting Pakistan’s principled tit-for-tat retaliation be the end of their recent tensions, India turned up the notch by dispatching two more of its MiG jets to violate the LoC and possibly stage another episode of its ‘surgical strike’ drama, though they were predictably shot down by the Pakistani Air Force (PAF). Displaying the maturing that a rising great power such as the global pivot state of Pakistan is expected to have, Prime Minister Imran promptly went on national TV to reiterate that his country does not want to take the situation any further.

He made it clear though that “no sovereign country can allow another country to become judge, jury and executioners” by using unverified claims such as the Pakistani state’s involvement in the Pulwama attack to violate its airspace and stage a ‘surgical strike’ stunt. India refused to jointly investigate that ‘trigger’ incident with Pakistan, instead choosing to unilaterally act aggressively against it.

This pattern of behaviour is strongly influenced by the modus operandi of its new American and ‘Israeli’ allies, who never have any compunction against striking whatever state they feel like, though once again, India’s Bollywood delusions deceived it. Nuclear-armed and battle-tested Pakistan isn’t anywhere in the same league as Arab Spring-afflicted Libya or war-torn Syria. Hence, Modi’s plan of carrying out an American and Israeli-like strike against Pakistan – to say nothing of an Iraqi-style ‘shock and awe’ campaign – with impunity was a fantasy from the very beginning, though one which the Indian leadership has dangerously decided to play out in real life.

Unlike those aforementioned targeted states, however, Pakistan is strong enough to defend the principles of international law, especially sovereignty and territorial integrity, by militantly upholding the United Nations (UN) Charter, which is why it promptly shot down both Indian jets that tried to stage another ‘surgical strike’ provocation.

It has become fashionable over the past few years for world leaders to lament the demise of the so-called ‘rules-based international order’, yet Pakistan just proved that it’s possible to defend it if states have the political will and military capabilities to do so. Whether it’s India, Israel or the US, this actual ‘Troika of Tyranny’ (unlike the Latin American one that US National Security Advisor John Bolton spoke about late last year) is destabilising South Asia, West Asia/Mideast, and the whole world, respectively. It is doing more than any others to throw international relations into chaos as they desperately try to stop the emerging multipolar world order at all costs.  It shouldn’t be seen as coincidental that India is the US’ only “major defence partner” and bragged about using ‘Israeli’ missiles in its latest ‘surgical strike’ stunt that it intended to indirectly destabilise the Belt and Road Initiative’s (BRI) CPEC megaproject.

‘Surgical Strike 2.0’, the latest Bollywood flick to come out of Modi’s India, was supposed to be an action-packed comedy that would highlight the ‘bravery’ of the Indian Armed Forces as they ‘humiliated’ Pakistan. But the movie abruptly transformed into real life after New Delhi forgot that military stunts have real world consequences and Islamabad showed that it’s more than willing to turn this comedy into a tragedy for its main protagonists. This ‘plot twist’ revealed that far from being the ‘heroes’, the Indian Armed Forces are actually the antagonists while their opponents in the Pakistani Armed Forces are the real protagonists fighting to safeguard the principles of the UN Charter upon which the rules-based international order is based.

Usually when a movie is going as bad as this one is, it’s a good idea to walk away even if the viewer can’t forget that the experience ever happened, but Modi seems to have a morbid fascination in seeing how much worse things will get. He’s forgotten that he’s not in a flick but is the main player of an ultra-risky high-stakes gamble involving the fate of his entire nation. The ‘surgical strike’ charade was exposed as the fake news infowar that it was from the very beginning, but unless Modi wakes up and realises the damage that this vote-grabbing stunt has inflicted on his country, Pakistan will ensure that ‘Surgical Strike 2.0’ has the worst ending in Bollywood’s history.