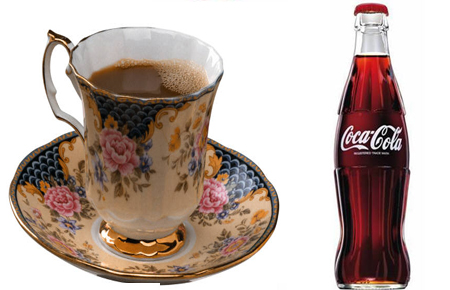 ‘Chai’ is just as much a colonial symbol as coke is a capitalist one.

A few days ago, a guest at my house enquired why I don’t drink tea. I mentioned that at some precarious juncture of my youth I irrevocably replaced ‘chai’ with ‘coke’ as my daily conduit. He expressed his dismay and proceeded to tell me how ‘coca cola’ was a Zionist enterprise and a universal capitalist symbol. I responded that ‘chai’ was just as much a colonial symbol as coke was a capitalist one. If one beverage carried with it the plasticity of commercialism; the other bore the bourgeois refinement of elitism.

The conversation got me thinking seriously about our colonial baggage. Pakistani’s have often been accused of being ‘confused about who they are’. This is undoubtedly an apt deduction, however, the point of contention usually resides in the fact that the accusation hails from the West. Pakistan shares with India a brutal colonial legacy and yet we seem to have come out of colonialism the worse for wear. We are oversensitive about our colonial heritage and often tend to wallow in its aftermath. Our neighbour (to some extent) seems to have reconciled with its brutal legacy by examining its past in a historical, academic context. Pakistan never really seems ready to study its past, hurling its present into ever increasing turmoil.

“a settlement in a new country…a body of people who settle in a new locality, forming a community subject to or connected with their parent state; the community so formed, consisting of the original settlers and their descendents and successors, as long as the connection with the parent state is kept up.”

Unsurprisingly, this definition neglects any mention of the ‘settl-ees’ of these lands. The pirate nation did not feel that the indigenous populations to be conquered deserved consideration in the former’s understanding of the colonisation process. That is, until the pirate had to contend with a seemingly infinite mass of natives.

The odd thing about colonisation is that it is an ongoing process, which is why the term ‘post colonialism’ (the sense of being formally independent) has largely been debunked by scholars and is being replaced with ‘neocolonialism’ (the sense of remaining economically and/or culturally dependent). The former term implies that colonisation ends with the departure of the master: us former colonies know that this is not the case. If anything, countries and people truly become colonised after the physical colonisation process ends.  After the subservient consciousness is tangibly drafted it has time to simmer and soak and solidify over decades. The functioning of these ‘lesser serfs’ takes place when they are ‘granted’ freedom. Aim’e Ce’saire once asked whether colonisation truly was ‘civilisation’, as our former gora saab’s proclaimed?

“We must admit once and for all, without flinching at the consequences that the decisive actors here are the adventurer and the pirate, the wholesale grocer and the ship owner, the gold digger and the merchant, appetite and force…”

Many of us still wear our colonial legacy with pride. Our obsession with ‘gora’ complexion is perhaps the most tangible psychological remnant of viewing our former masters as innately superior to us, by virtue of the very skin they classified as ‘pristine’ set against the ‘brown mass of Hindustan’. Our complexes have also prevented us from acknowledging the benefits we received, albeit by default, from our harrowing colonial legacy. Loathe as we are to admit it, most of Pakistan’s historic structures remain British gifts; we haven’t even attempted -in 60 plus years- to update the crumbling British railway system and our updates to the legal system have generally proven a disservice to ourselves. None of this, however, excuses the impetus of the coloniser for having thought that the South Asian ‘heathen’ could be robbed and ‘civilised’ in one fell, century-long swoop.

Sadly, our penchant for blaming our past for our present seems the sure fire way to indelibly compromise our future prospects. We are caught in a vicious cycle of proving our former rulers’ narcissistic assertions true as Pakistanis resist modernity today just as the Subcontinents’ Muslims resisted learning English during the British Raj. Not realising that the seemingly, self-righteous stand would inevitably cripple future generations. If we are to succeed in an arena of intellect and economics today, Pakistanis must shed the victim mentality they have donned as a mantle to replace their former serf mentality with.

We are no longer a conquered people – by the gora, the amreeki or the Taliban. It is about time we started acting like it.