Influenced by India, is Iran projecting its anti-Saudi frustrations onto Pakistan? 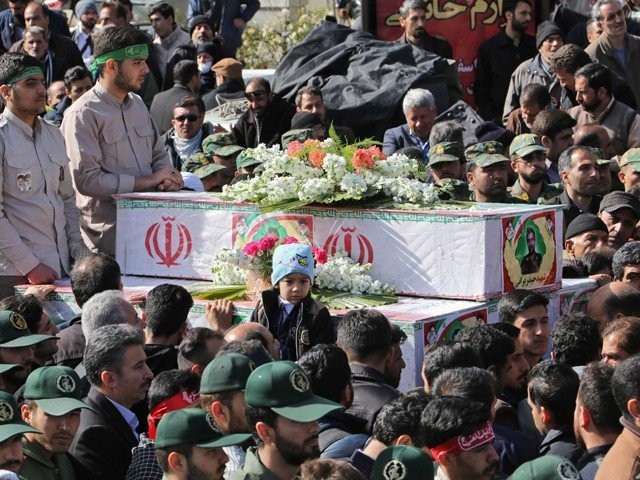 Members of Iranian revolutionary guards corps (IRGC) attend the funeral of fellow guards, who were killed in a suicide attack, in southeastern city of Isfahan on February 16, 2019. PHOTO: AFP

According to Iran, the summoning of Pakistan’s ambassador had nothing to do with MBS’ visit to Pakistan, during which Imran Khan’s PTI government looks to secure lucrative investment deals with the cash-rich Kingdom.

Instead, Iran claims that the summoning was due to a suicide terror attack in the south-eastern Iranian hinterlands between the cities of Zahedan and Khash, which took the lives of around 30 elite Islamic Revolution Guard Corps (IRGC) members, while injuring many more.

The suicide attack was claimed by the Takfiri terror group Jaishul Adl, an al Qaeda affiliate operational in the frontier lands between Pakistan’s Balochistan province and Iran’s neighbouring Sistan and Baluchestan Province.

Prior to Iran summoning the ambassador, top Iranian officials including IRGC Chief Commander Mohammad Ali Jafari accused Pakistan of harbouring the terrorists. Jafari went even further by specifically saying that Pakistan’s security services had direct links with the terror group in question.

At the same time, Iranian officials threatened to strike alleged terrorist targets in Pakistan without consulting with the Pakistani government.

Days after the attack in Iran, an unrelated attack on an Indian military convoy in Indian-occupied Kashmir (IoK) took place. In spite of the fact that the group claiming responsibility for the attack is banned in Pakistan since 2002, Indian officials and influential media personalities wasted no time in blaming Pakistan whilst offering threats of “revenge” attacks on Pakistani territory.

Thus, one sees Pakistan being faced with absurd accusations on either side of its borders, but while some of these accusations were predictable, others are deeply unfortunate and disappointing.

While India’s hyperbolic response to the events in Kashmir were all too predictable, Iran’s response to a terror attack in its south eastern province has gone over and above what could have otherwise been expected.

After a similar attack on Iran in 2017, Tehran issued a statement hinting at Pakistan’s culpability for the actions of a non-state terror group which took the lives of 10 Iranian border guards.

At the time, geopolitical expert Andrew Kroybko warned about Iran falling into an anti-Pakistan infowar trap which had been carefully set by India’s Research and Analysis Wing (RAW), in order to effectively push Iran towards an anti-Pakistan position as part of India’s pan-regional attempt to isolate the strategically located ‘zipper of Asia’.

Two years later, not only has Tehran appeared to have fallen for the “Pakistan sponsors terrorism” canard that India has been promulgating for decades, but the recent statements made by Iran regarding Pakistan have been far more over the top than that what was said by Iranian officials in 2017.

Pakistan’s Balochistan province has been home to multiple anti-state terror groups, the most infamous of which is the so-called Baloch Liberation Army (BLA). While the BLA and its splinter groups are secular anti-state terror groups, the lawlessness that the BLA had created in parts of Balochistan also attracted the presence of al Qaeda and similar Takfiri terrorist organisations to the province. Whilst such groups have different means of promoting extremism, they have shared the uniform goal of undermining the Pakistani state in the name of ethno-separatism.

On paper, Iran has acknowledged (both prior to 1979 and since the Islamic Revolution) that the presence of such groups in Pakistan’s Balochistan province is a threat to Iranian territorial integrity in respect of Iran’s Sistan and Baluchestan province.

Logic itself would dictate that foreigners weaponising ethno-separatism in Pakistan could and would do the same in respect of Iran. The result is that through a combination of blowback as well as the invocation of Pan-Baloch separatism on both sides of the Iran-Pakistan border, the same groups and types of groups which threaten peace in south-west Pakistan, do the same in respect of south-east Iran.

This is why it is thus absurd for Iran to accuse Pakistan and its highly professional security forces of aiding a terror group whose violence against Iran necessarily threatens Pakistan, owing to Islamabad’s decades-long war against extremism on the other side of the border.

While New Delhi and Kabul continue to try and convince the world that there is no such thing as the widely acknowledged phenomenon of terrorism blowing back across otherwise “friendly” borders, Iran’s experiences with counter terrorism on its western borders, against both Takfiri Arab groups and Kurdish ethno-separatist terrorism, ought to have led Iran to realise that just as terrorism in Iran’s western neighbours can threaten Iran, so too can terrorism in Iran’s eastern neighbours. But while Iran would never accuse its post-2003 Iraqi state partner of fomenting anti-Iranian terrorism, Iran has said just that in respect of Pakistan.

Not only is this not a respectful way to treat a partner and neighbour with a common set of enemies, but it also appears to be motivated by several factors which have nothing to do with the tragic loss of Iranian life in Sistan and Baluchestan.

While Iran kept quiet during much of the Jamal Khashoggi incident in which Turkey began to lead both a great deal of Arab and European opinion against Saudi Arabia, the fact is that while Saudi Arabia’s western partners started to openly question Riyadh’s role as a partner, this did not happen among Pakistan’s Asian partners, including not only Pakistan but crucially also China and Russia.

Pakistan’s contemporary relations with Riyadh must be understood not through the prism of a distant past but through that of a China-inspired win-win diplomatic model that has come to define the premiership of Imran Khan and the government of his PTI party.

According to these principles, Pakistan seeks to become the Switzerland of the Ummah (global Islamic community) insofar as Pakistan seeks partnerships with all and conflict with none. Rather than taking sides in the conflicts of others, Pakistan seeks only to put itself forward as a possible neutral arbitrator in such disputes.

This is what has allowed Pakistan to retain good relations with Saudi Arabia and the UAE on the one hand, whilst also strengthening ties with Turkey and its ally Qatar on the other. This has allowed Pakistan to draw both China and its Cold War rival Russia into an Afghan peace process which is following a broadly Pakistan-authored model that Trump’s White House is now admitting is the only way out of an American quagmire that has gone on for longer than Moscow’s Afghan quagmire of the 1980s.

This also explains why the PTI government has simultaneously sought to accelerate an ongoing improvement with its Iranian neighbour.

And yet in spite of these clear trends, Iran has decided to air its frustrations in public and has even gone so far as to spout Indian style fake narratives about Pakistan’s security services. Such an approach is not only immature but it smells of desperation.

Iran is clearly frustrated that while cash-rich Saudi Arabia can offer substantial investments to Pakistan, Iran is not in a position to do so, in spite of its sizeable oil and gas reserves. Iran has also conveniently forgotten that right after his trip to Pakistan is complete, MBS will visit India where he will call on Pakistan’s nemesis, Premier Narendra Modi. Thus, while Iranian social media had been losing its collective cool over MBS’s visit to Pakistan even prior to this week, criticism of his visit to India has been generally muted in spite of the fact that India is Iran’s major partner in operating the Chabahar Port on the Gulf of Oman.

Many have pointed out that after a week in which Israeli leader Benjamin Netanyahu and American Vice President Mike Pence tried to unite Europe against Iran, the only unity that occurred by the weekend was one between Israel and Iran – directed (either directly or through strong inference) against Pakistan.

In this sense, India has Iran right where it wants it in terms of fomenting an irrational approach to neighbouring Islamic Pakistan. While Iran’s statements and diplomatic actions taken against Pakistan may be designed for domestic consumption, they have already reverberated across multiple capitals from New Delhi to Tel Aviv.

It is certainly not too late for Islamabad and Tehran to re-set their relations, but the past hours and past days have seen things take several leaps backward. This ultimately will not serve Iran any more than it will serve Pakistan.