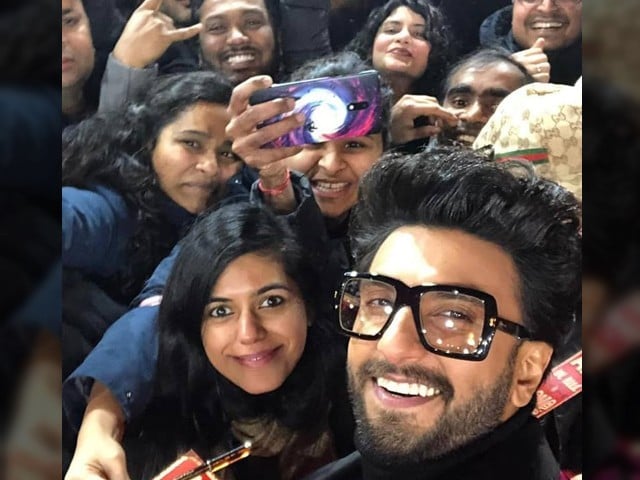 The city was rife with electricity and excitement as Singh and Bhatt both gave autographs and took selfies with fans. PHOTO: WARDA IMRAN

All the nearby bus, train, tram stations were filled with Hindi/Urdu speakers discussing the arrival of the stunning crew. The red carpet area of the cinema was decorated specially for the stars. Minutes before the film was scheduled to begin, Bollywood’s heartthrob Singh made his entrance along with the elegant Bhatt, both waving and smiling to frantic crowds of fans. Calm and collected Bhatt donned a lime green ensemble while Singh’s look included a daring hot pink and black coat that was paired with flashy black boots.

The crowd outside the cinema was hard to contain as fans climbed on to pillars just to get a glimpse. The city was rife with electricity and excitement as Singh and Bhatt both gave autographs and took selfies with fans. But my favourite group of fans was of a mixed group of Germans and Indians where the former sported shalwar kameez with some chunky accessories to match their outfits. It was a sight I’d never seen before in the last six months. Also surprising were the Turkish/German/Arabic fans who also turned their heads emphatically to catch a glimpse of the stars. 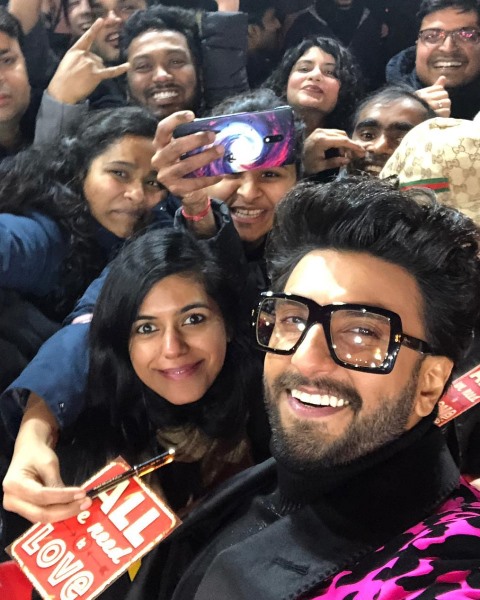 As the film commenced, the crowd was still buzzing, with whistles and woos at Singh’s entrance, down to an applause at every fantastic dialogue delivery, the audience was particularly enigmatic because the stars sat among them for the film’s duration.

Gully Boy is a directorial diamond; some scenes were so strong and impactful that the shot left you stunned in the moment. However, the real prize of the film was Siddhant Chaturvedi’s MC Sher, the mentor to Gully Boy Murad (played by Singh). Sher motivated Murad and gave him the confidence nobody in his surroundings were ready to give. He invested time and energy in a harvesting talent, and Chaturvedi’s stint as Sher won him a fan in me.

Singh played the role with elegance, his facial expressions and his dialogue delivery further added impact to the existing themes being explored, including the harrowing lifestyle of a poor Muslim boy residing in the Dharavi area. His family lay at one of the most difficult intersections of identity in India, one that advocated corporate slavery as opposed to creativity or innovation. Among the most impactful scenes are the ones where parents hit their children; Murad and Safeena (Bhatt) both are repeatedly slapped over the course of the film which sheds light onto the destructive relations between the two generations.

A touching element was Murad’s affection for his mother in the face of his abusive father, and how he integrated his love for her in his rap as well. With sharp and edgy lyrics compiled by the likes of Divine the Rapper, Javed Akhtar and Ankit Tiwari and a hoard of rappers, beat boxers and lyricists, the movie sails through more than 15 songs smoothly, each stitched in perfectly orchestrated scenes. The only hint of romance the movie contains is between Safeena and Murad who are romantically involved – from afar – and adds flavour to the otherwise single narrative of the film.

Bhatt plays a fiery Safeena who is possessive, overprotective, emotional, daring and violent which is in stark opposition to Singh’s shy, silent, insecure, crowd-frightened Murad. But the film is not about his transformation into an overnight sensation, it’s about the struggles during the journey.

The film wanted to give a taste of the extremes some people from the lower class can go for the sake of survival, and how they carve their way through injustice, abuse, poverty, desperation and opposition. The film received much praise from the audience and after the show, the entire crew got on stage but the spotlight was undeniably on Singh who delivered a short speech and sang the famous Apna Time Aayega on stage with a wild crowd singing along.

The organisers of the film festival seemed visibly pleased by the amount of viewers the team was able to reel in. The cinema can hold up to 1,895 people and I can safely say that almost all of it was occupied. With a swift exit, the cast escaped to the after-party which had all the who’s-who of the film industry and the city invited. When the fans exited the cinema into the four-degree wind, after almost four hours of the entire event, Gully Boy still echoed in the streets. Fans continued to rap and chant their favourite stanzas from the film and everyone enjoyed the atmosphere.

What surprised me was the finesse with which the film crew managed to spend so much time on the red carpet in the freezing Berlin winter. A quick look at Bhatt made me want to zip up my jacket further to cover my face, but I’m sure they have been trained to withstand difficult temperatures.

Gully Boy had good energy and the flow of the film was commendable, each scene was stitched together carefully and was shot beautifully. But more than the film, the impact was of the event, even those who were slightly disappointed by the hiccups in it, remained charged because the experience trumped the individual effect of the film. The feeling that the very stars on screen sat amongst us and heard each woo and applause to their performance was enough to make the movie look larger than life.

The walk home seemed to export me from the German culture to a familiar feeling back home, the buzzing crowd outside Nueplex or Ocean Mall when a new Shah Rukh Khan movie hit the screens or when your favourite Bollywood pair shared the screen. With Apna Time Aayega playing on loop in my head – the last song in the film – there was a new connection each of the attendants shared: of being on common ground, of appreciating similar things and of art.