Remembering Asma Jahangir: A democrat in a country that loved dictators 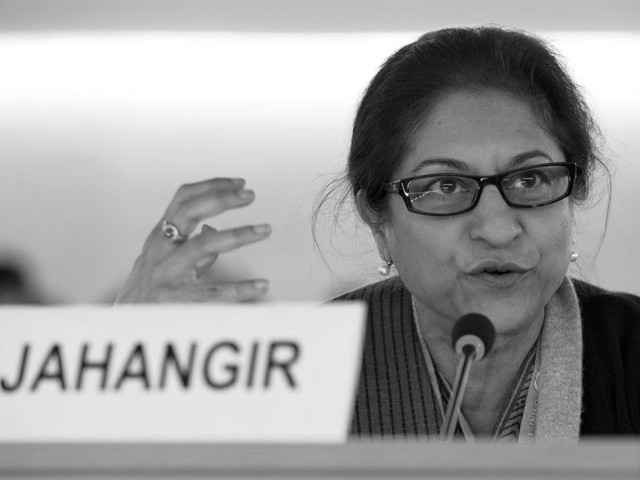 When she entered the courtroom, all eyes turned to her. When she spoke, the legal heavyweights of the profession wouldn’t dare interrupt her. PHOTO: UN GENEVA/ FLICKR

A year ago, when the news came in that Jahangir had passed away, I felt like I no longer recognised the legal system I had worked so hard to become a part of. To understand why, let me tell you a little bit about who Jahangir was.

Jahangir was a woman who was born a democrat in a country that loved dictators.

The Convent of Jesus and Mary may have been the first to discover this. The Convent had a system for selecting their head girl in which the nuns exercised complete control over who would hold the position. The process involved no input from the student body. This didn’t sit well with a young student studying for her O’ Levels, known as Asma Jilani. She would lead a protest demanding there be an election to choose who should hold the position. The nuns caved in to her demand, setting a precedent that is followed to this day.

At an age when most of us are busy trying to figure out which subjects to take so we can guarantee the most A’s for ourselves, Jahangir was fighting her first skirmish for democracy. It wouldn’t be her last.

Jahangir was someone who Pakistan’s legal system could not ignore, no matter how hard it tried to avoid the fact that a woman was arguing and setting precedent on some of the most important issues in the country. This isn’t surprising. Fate seemed to have a plan for her.

She knew her way around Pakistan’s courts at a time and age when no one should have to. Her father’s imprisonment at the hands of Yahya Khan made sure of that.

In fact, her father’s imprisonment would lead to Jahangir setting one of the most important legal precedents in Pakistan’s history before she was even licensed to practice before the courts in Pakistan. As the petitioner in her pursuit of justice to free her father, her name was set in history when the verdict was delivered by the Supreme Court of Pakistan in Asma Jilani versus the Government of Punjab. This was a case in which the Supreme Court declared Yahya’s dictatorship illegal and ordered the release of Jahangir’s father.

For many people, this would have been enough history-making for one lifetime. But as I’m pointing out in this piece, Jahangir was not like other people.

I saw this for myself, having been lucky enough to have seen Jahangir in a courtroom (although thankfully not as opposing counsel). Jahangir the advocate was a force that could only be seen to be believed. When she entered the courtroom, all eyes turned to her. When she spoke, the legal heavyweights of the profession wouldn’t dare interrupt her (a common practice that female advocates have to suffer through in Pakistan). Judges sat up straighter to listen. Even Saqib Nisar – for all his bluster – didn’t raise his voice when Jahangir was at the rostrum. If you were the opposing counsel, well, you’d better hope you were ready for battle.

Pakistan’s patriarchy, ever threatened, worked hard to silence the voice of Jahangir. In 1983, for example, while she protested the Hudood Ordinance, she was subjected to tear gas, beaten, and arrested. Later on, Ziaul Haq’s puppet parliament would pass a resolution that she had committed blasphemy (an allegation that was disproved). She was threatened with the death penalty and had her house attacked by people attempting to kill her for her activism. She was forced to send her child, Munizae, to boarding school because of threats that someone would abduct her.

Despite all this, Jahangir barrelled forward, not giving an inch. Fearless.

Perhaps that is her greatest legacy. A message to female lawyers and advocates fighting for the rights of women: be fearless. In the face of oppression, raise your voice. The harsh current of patriarchy will try to drown you, but let the memory of Jahangir’s struggle allow you to catch your breath and move on.

The number of obstacles she faced is a lesson in determination. Every woman in Pakistan fighting for basic rights faces obstacles that seem insurmountable and frustrating. But even today they think of Jahangir, that one woman from amongst them, who faced such obstacles and more, and overcame them all. A constant source of strength, even as she has been gone for a year.

Today, Pakistan’s legal system is still plagued by misogyny. The loss of Jahangir meant the loss of a strong and prominent female voice that female lawyers could gravitate towards. Her passing has left a space that can never be filled, but her passing doesn’t mean she is forgotten. The young women she has inspired continue to enter a profession that is flooded with men. Her legacy can remain alive through them, her voice just as sonorous in our minds, if we continue to fight for the rights of the oppressed and victimised. If we continue to stand up to misogyny, to the violations of human rights in the name of security, religion or nationhood.

Do we miss Jahangir? Of course we do. We miss her when Cambridge-educated professors are picked up from their homes for exercising their fundamental right of free speech. We miss her because we, as a country, became complacent. We took her presence for granted. We had our fighter and we thought she’d be with us forever. Now that she is gone, we are struggling to find someone to take her place.

No one person amongst us can equal one Jahangir. But all of us together can maybe, just maybe, make sure that those who sought to silence her never succeed in violating our basic human rights. For generations to come, her influence should inspire us to raise our voice. If we can do that, I can picture her somewhere, smiling. A solitary star in the sky that we can follow to guide our path towards a better Pakistan.