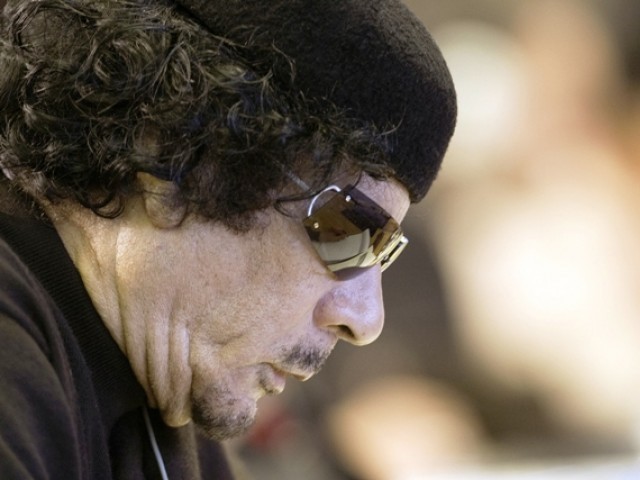 In Qaddafi we have lost not only a despot but also one of the most remarkable figures of the 20th century. Call him eccentric, idiosyncratic or an oddity; yet the satisfaction of finding le mot juste will elude you.

The problem here is not with Qaddafi, it’s with these words: none of them can do justice to the personality of ‘the mad dog of Middle East’. Only if there was a word which could sum up his callousness, clownery, perversity and political maturity, many could die happy. The only competition that Qaddafi had was His Excellency, President for Life, Field Marshal Al Hadji Doctor Idi Amin Dada, VC, DSO, MC, Lord of All the Beasts of the Earth and Fishes of the Seas and Conqueror of the British Empire in Africa in General and Uganda in Particular. Remove Idi Amin, and Qaddafi overshadows all the Boris Yeltsins this world can produce.

Qaddafi loved to drop bombs on Libyans and shockers on the west. He was the only world leader to give credence to the claim that Shakespeare was a crypto-Arab, whose real name was Sheikh Zubair bin William. It was so outrageous, so out-of-the-box move, that if all other things related to Qaddafi were destroyed, he still couldn’t be forgotten. Twenty years after making this bizarre claim Qaddafi didn’t lose his touch. A couple of years ago, he demanded that Coca-Cola pay Africa royalty because the beverage was ‘African’ as “its essences came from [African] plants.”

Qaddafi must have felt left behind after Idi Amin won himself so many medals and titles, so he decided to confer upon himself even better titles, such as: ‘the Brother Leader’, ‘Guide of the Revolution’ and ‘King of Kings of Africa’.

A leader with style

When visiting foreign countries, Qaddafi never forgot to bring with him a heated Bedouin tent which he would peg outside the hotels he was staying in. Sometimes a camel would also be flown in to put a complete show. The Brother Leader was so conscious of how he presented himself, that he changed his outfits a number of times every day. Now he’d be a Navy general, now he’d be an Arab freedom fighter; now in his tuxedo, now in a purple African dress; now a deer hunter, now an aged rap star! Moammar Qaddafi was known for letting his outfits speak for him; he made a very ‘bold’ statement by pinning a photograph of an Arab rebel, Omar Mukhtar, on his black military outfit when he arrived in Rome in 2009.

There’s only one thing that can be said now that the ‘Guide of the Revolution’ has been driven away from his land:

“Qaddafi is gone! Circus is empty –

Weep, Libyans, you no longer have a clown.”

One of the many Ukrainian nurses Qaddafi had hired, Oksana Balinskaya said in an interview recently that the Libyan never asked for sexual favors. According to her, he only wanted ‘to surround himself with pretty faces’. There is much evidence to support this claim.

In the 1980s, a group of young celibate women- unofficially known as ‘The Amazonian Guards’, ‘The Killer Beauties’ and ‘The Sweet 72’- was formed to guard him. Surely, Qaddafi has already filled his quota of virgins and it is very unlikely that he’ll get anymore in the afterlife; but I digress. These women bodyguards wore heavy makeup, western hairstyles and tight military uniform- none of which could possibly ward off a would-be assassin. But then there was always some hidden wisdom in The Brother Leader’s decisions. It could only be this ineffable wisdom which made him request Italian prime minister to set up a meeting with seven hundred Italian women. There are also reports of Qaddafi flirting with female journalists. However, nothing can top the discovery of a white photo album from Qaddafi’s Tripoli compound. Filled with pictures of former American Secretary of State Ms. Condoleezza Rice, this album is most probably the last of what we’ll hear of Mr Qaddafi.

There are clear traces of perversity in his controversial remarks about the lady:

“I admire and am very proud of the way she leans back and gives orders to the Arab leaders…………Leezza, Leezza, Leezza… I love her very much”.

It would be a relief to know that Qaddafi had bedded most of these women, for there can be no other explanation for this ‘deeply bizarre and deeply creepy’ behavior. Sultans don’t keep harems to count the concubines before going to sleep – perversity will admit pedophiles and coprophiles but not the counters.

If Qaddafi’s nurses and guards are not purged, there will still be a few who’d mourn the loss of the King of Kings.

Nobody would be surprised if the future lexicographers decide to define eccentricity as behaving like Qaddafi. However, there has been a new tendency to dismiss the Libyan as a mad man who managed to cling on to power by sheer luck. Nothing could be further from the truth.

Moammar Qaddafi was one of the first African leaders to challenge Western control on its oil resources. He told the western oil companies to pack-up if they were not ready to negotiate, stating that “people who have lived without oil for 5,000 years can live without it again for a few years in order to attain their legitimate rights”. If a man is able to rule a country for almost fifty years, he is either a shrink or a shrewd politician. Qaddafi certainly wasn’t the former.

Unfortunately, revolution can’t continue forever. Muammar wasn’t born a leader; he should have handed over the power to the actual representatives of the Libyan people. His refusal only caused more mayhem and destruction.

With Qaddafi gone, Libya would fare less in the papers – which, though not a bad ending for the Libyans, is one more reason to not read newspapers every morning.

The author is an undergraduate student at LUMS, pursuing a degree in Bsc. Electrical Engineering.

A day in the life of Nasreen kaamvaali

Many Mumtaz Qadris: We are children of hate