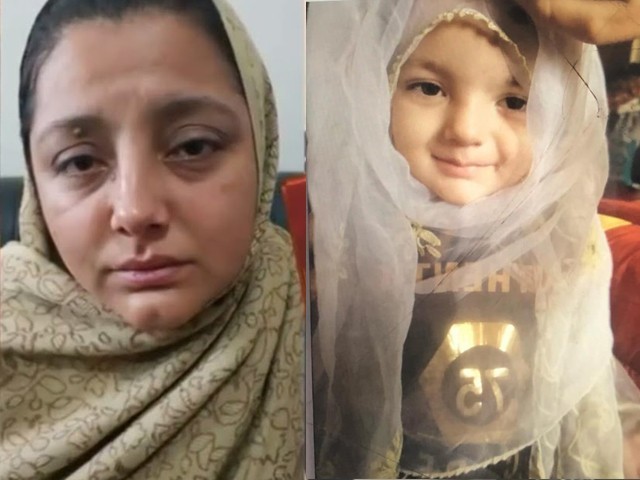 Shakeela allegedly threw her two-and-a-half-year-old daughter into the deep end of the sea near the Farhan Shaheed Park in Defence Phase VIII.

It was an ordinary Tuesday evening and I was putting my three-year-old to bed, praying that her fever does not relapse and that she feels well enough to go to school the next morning. As I watched her gently fall asleep, I felt guilty for scolding her earlier in the day.

I love her dearly, of course, but I too am human and have not been sleeping particularly well since the past week because she has been sick. I planned on taking advantage of the Kashmir Day holiday to sleep in late, but her tantrums spoiled all such plans.

I took a deep breath, quietly whispered “I’m sorry” in her ears, kissed her forehead and moved over to work on my laptop as I had deadlines to meet. At the same time, I started aimlessly scrolling through my social media feed. At this very moment, I stumbled across the story of Shakeela, a young mother who had recently tossed her two-and-a-half-year-old baby girl in the icy cold Arabian Sea.

The graphic pictures of Anam’s tiny body lying lifeless on the Karachi beach were absolutely heart-wrenching. Shakeela, a young first-time mother, claimed to be in distress after her husband refused to keep her and her daughter in the house and her parents refused to take her back because she was now married. With nowhere to go, Shakeela stated that she had thought about first killing her child and then herself.

Right under the news story, in the comments section, there were a myriad of abuses being hurled towards the “insensitive” and “heartless” mother for killing her own child. My heart skipped another beat as I stumbled across a popular blog covering the story with a caption that questioned her motherhood in the harshest way possible.

I promise I wanted to hate Shakeela for what she had done but I somehow couldn’t bring myself to. Perhaps because deep down I understood to an extent why she did what she did.

Three years ago, when I gave birth to my beautiful daughter, what should have been the most blissful phase of my life, felt more like a nightmare. I could not process the paradigm shift in my life, grew overly sensitive to petty things, suffered from unexplained, spontaneous breakdowns and occasionally felt very detached from my own child.

Medical science refers to this phase as postpartum depression (PPD), an ailment that commonly affects new mothers. This phase of my life was categorised by problems in my relationships due to my “unreasonable” attitude, and poor mental and physical health among other things.

Fortunately, in my personal case, I was privileged enough to have a supportive spouse, access to online support groups and professional help that enabled me to take charge of my life again. Shakeela and many others do not have this privilege. In fact, most people in this country aren’t even aware of the existence of PPD or what it even is.

PPD can manifest itself in many different forms. Although not every woman suffering from PPD goes to the extent of harming their child, many do resort to self-harm and even suicide, while some subject their infants and toddlers to verbal and physical abuse, blaming them for their own helpless situation, and a few do what Shakeela did.

I’m not trying to play the role of devil’s advocate here, but women like Shakeela are psychologically deluded and believe that death will put their child in a better place and away from the cruelty of the world. They see death as a peaceful escape for their child or themselves and not as a tool of harm or punishment.

Unfortunately, we live in a society where mental health in general has never been taken seriously and the past year has been full of stories of young people, who are unable to find peace in society and ultimately find solace in death.

In a society such as ours, things become even more challenging for women, especially mothers who are already dealing with emotional instability, mental shutdown, paranoia triggered by hormonal imbalances, physical weakness and an exhausting lifestyle change.

At a time when a woman needs a strong support system, she is instead subject to insensitive taunts, judgments and accusations that stem from the patriarchal norms deeply ingrained in our society.

This is unfortunately something almost every mother in our society goes through at some point in her life or the other. Some manage to sail through it, while others sink into the toxic whirlpool. The situation is so much worse for women like Shakeela. Such women don’t only have abusive and unsupportive spouses and in-laws, but also highly unsupportive parents who believe it is a sin to protect their daughter once she is married.

Think about it. Don’t we tell women in our households that motherhood is “normal” and that they are being “overly sensitive”? Don’t we blame mothers for producing babies that are not fair-skinned or not the gender of preference?

Don’t we question an already exhausted mother for the choices and decisions that she takes for herself and her child? Don’t we tell our daughters that the ultimate goal in their life is to marry a man, preferably one that the family elders choose for them?

Don’t we tell people claiming to be suffering from mental health issues that there is no such thing as depression and that all they need to do to feel better is pray to God for forgiveness? Don’t we watch morning shows where ‘experts’ claim that homemade juices made out of spinach can be used to treat depression and that psychiatrists are all frauds, seeking to only make money?

I am sorry, but I do not blame Shakeela. I blame the society that has created and endorsed such standards in the first place and still continues to do so. What happened to the baby might be just her mother’s fault on the face of it, but deep down, it is a slap across the face of this society. We have all collectively played our part in killing the little angel.

We are all equally responsible for putting a mother in a situation where only death seems to be a logical escape for her and her child. If we as a society genuinely want to stop such incidents from happening, we need a serious introspection of our own norms and attitudes and a very responsible and proactive approach towards mental health issues.