Dr Zulfiqar Mirza, it is time to go home now 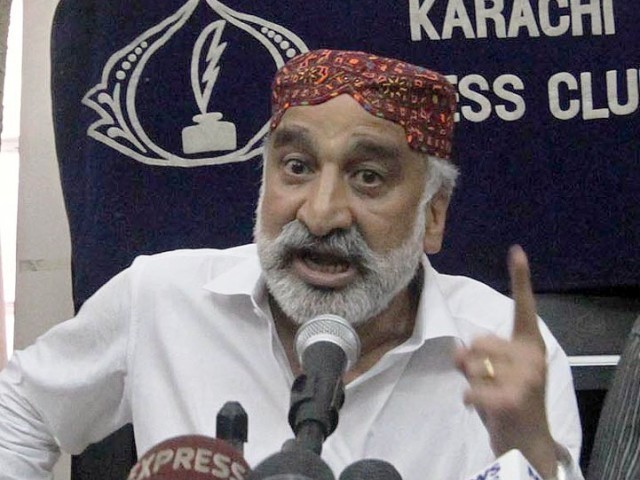 Mirza needs to head back home and serve his constituency PHOTO: PPI

Badin, the constituency of Dr. Zulfiqar Mirza has once again been hit by heavy rainfall and floods. According to news reports, 300,000 people have been displaced and are suffering from insufficient food and water supply.

A few days ago, Prime Minster Mr Yousaf Raza Gilani visited the camps in the affected areas, and after his departure the scene turned chaotic as flood victims fought over the inadequate amount of relief goods. The police had to baton charge the people to bring the situation under control.

Some flood victims sustained injuries while others had to run away empty-handed in order to escape the baton charge.

This is the current situation of those people who voted for Dr Zulfiqar Mirza and made him the home minster of Sindh. Instead of serving the needy people who voted for him in hopes of a better life, Mirza is busy holding press conferences in Karachi and press clubs in Hyderabad against his opponents.

Zulfiqar Mirza has announced that he will leave politics. Whether he will stand by his decision or not, I believe it is about time for him to go home, serve his people and help them in this tough time. He didn’t do much to help the needy when he was the home minister of Sindh, which is proven by the official report of the Sindh police from 2008 to 2010. The broken infrastructure in Badin, broken dams, insufficient relief goods, the many homeless people, and the countless deaths due to water borne diseases in the camps is an alarming situation for any ruling political party.

When one enters politics, social work is the best way of letting those who voted for you know that you will serve them through a higher public service post. Unfortunately our politicians have derailed from the right path of politics, and are busy attacking opponents and snatching vote banks. Moreover, they try their best to destroy opponents’ constituencies by destroying property, torching buses and manipulating others’ mandates.

Sindh nationalist parties proved themselves to be the followers of this ideology by calling a strike in August 2011 in Karachi and Hyderabad against the majority mandate of the two cities. The strike was against the restoration of a local body system in Hyderabad and Karachi. The system is, in fact, the best system for two cities, and the majority of the two cities want it to be restored. The improved infrastructure in Karachi and Hyderabad is proof enough of the service provided by the services of local body system.

The approval of the status of a political party, or calling oneself a politician is not an excuse enough to call a strike. Instead, each party needs to serve their community to win the hearts of the people for the future votes. According to Jeffry H. Galpher’s book Politics and Social Work:

The people of Pakistan may not be educated, but they are  aware of the current situation around them. It is about time that our political parties understand the ideology of serving people to win command rather than attack others’ mandate.

As stated above: Dr Zulfiqar Mirza, it is time to go home now…