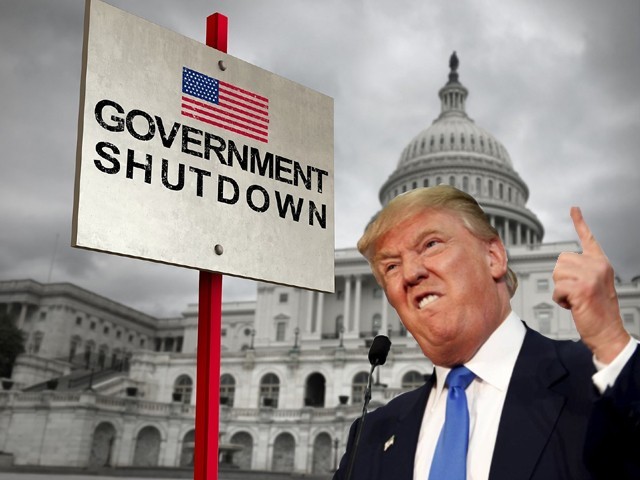 The mood in Washington is one of despondency and profound remorsefulness.

Where do I begin? Who do I pin the blame on? How did we get here? What happened to my United States of America, where from the time I came of age until now, in the twilight years of my life, I’ve held on to the belief that this is it; this is the land where I belong; this is home, the values of which I am wedded to. Where did we go wrong? How did this completely unworthy and unruly under-achiever manage to get elected to the highest and most revered office of the country?

We’ve had several government shutdowns in the past. However, the current one, just like the times we live in, is one of unprecedented nature. It’s a beast that is refusing to bow down. What started as a feud between Donald Trump and the Democrats over the US-Mexico border, this shuttering episode has already lasted for more than a month. It has impacted the lives of almost four million federal employees and contractors.

Those four million people are not only suffering financially, they are also unable to provide services to the public at large. Their absence from the places of work is affecting those who are in dire need of help to take care of their needs, such as mothers who are dependent on government benefits for feeding their children or disabled folks who are institutionalised and count on subsidies and grants.

Immigration is, no doubt, a problematic issue but it is an issue that can’t be dealt with the Trump way. Building a wall across the length and breadth of the border will not solve the problem. It will, in fact, only add to the US debt woes. Trump is stuck with the wall since his right-wing comrades have drilled into his head that the wall is the only way to stop people from infiltrating the US-Mexico border.

Little do they realise that (a) those crossing the border and seeking refuge are not criminals. They are not rapists, drug-traffickers or gangsters as Trump has made his supporters believe; (b) building a wall will not solve the illegal immigration issue simply because most of the undocumented aliens in the country enter the US through legal means (on visas) via the airports.

As for the drug traffickers, human smugglers and so on, a wall won’t deter them from carrying out their operations. They will find newer and innovative ways to get around any barrier that is put in their way.

Without a Wall there cannot be safety and security at the Border or for the U.S.A. BUILD THE WALL AND CRIME WILL FALL!

Facts do not support Trump (they never do) or justify his case for building the wall. Illegal border crossing has shown a remarkable decrease over the past several years. While Trump relentlessly continues to fool around with the emotions of his base, both the Republicans and the Democrats are sticking to their guns. It seems like this circus can potentially go on forever. Trump has effectively torpedoed the Republican party’s identity and hijacked its values. Leaders like Mitch McConnell and Lindsey Graham are sold out to Trump. The Democrats, on the other hand, won’t just sign off on the $5.6 billion that Trump is asking for the wall.

The current shutdown can easily end if Trump shows some leadership skills and takes the high road. He can establish a bipartisan congressional committee/fact-finding body and give them a deadline to come up with proposals for overhauling the immigration problem. That way, no one will lose. As a matter of fact, by doing so, he might end up earning some political goodwill.

But wait a minute. This is Trump we are talking about. He isn’t a peacemaker. He’s a mobster who wants action and drama! So instead of a reconciliatory effort, he would rather use his bully pulpit, get on Twitter and add fuel to the fire.

BUILD A WALL & CRIME WILL FALL! This is the new theme, for two years until the Wall is finished (under construction now), of the Republican Party. Use it and pray!

The wall is nothing but Trump’s monument to himself. It is also a bad ‘business’ idea just like the long list of his ideas that failed miserably in the past. He took office touting his skills to make deals. Two years into his presidency, Trump doesn’t have much to show regarding deal-making. He has pulled the US out of agreements and treaties all over the globe which implies that he’s more of a deal-breaker rather than anything else. On account of Trump’s handling of foreign affairs, the US is gradually getting isolated in the comity of nations. For better or for worse, it appears that he’s hit the wall as far as his “impenetrable, physical, tall, powerful, beautiful” wall is concerned.

The mood in Washington is one of despondency and profound remorsefulness. But that’s just a big city phenomenon. Trump still has his loyal supporters standing by him in the heart of America, that is, in small towns and rural areas. To them, he’s a celebrity and a hero; one who is protecting them from ‘illegal Mexicans’ and all the black, brown and yellow people. To his base, Trump is the one who will keep their weapons secure and help them get their country back (whatever that means).

There is absolutely no efficacy of a concrete or steel superstructure. It is only meant to satisfy Trump’s ego and grab the limelight. The US has clear and cutting edge technology that can digitally and virtually man all areas of the border. It only needs a few good men in the power centres of Washington to put their heads together and use the technology to improve the border-crossing infrastructure. If a tiny country like Norway can do it, so can the US.

The premise ‘better fences make better neighbours’ is intrinsically flawed in the US case. We have done just fine with our Canadian and Mexican neighbours and lived in peace for eons. This is by no means the Pak-Afghan border where religious fanatics, drug barons, and all kinds of nefarious elements slash and burn in rampant abundance.

While precious time is being lost, Trump doesn’t have a clue on ending the shutdown. He doesn’t have an exit strategy. He’s chancing his luck by tweeting aimlessly while people like Ann Coulter, Rush Limbaugh and Steve Miller keep a vigilant eye on him.

Shutting down the government as a bargaining chip with the Democrats for wall funding was a political stunt that didn’t pay off. It was a move to distract public attention from the Mueller probe that is causing sleepless nights for Trump. Trump is a president who is not presidential; a statesman who can never act like one; a leader who can’t lead. We messed up and are paying a heavy price.

In an era where the world is building bridges, Trump is isolating the US and constructing walls around it. As law enforcers, first responders, border control agents, and countless others continue to go unpaid for the fifth consecutive week, one is sure that Trump’s best buddy, Vladimir Putin, is having giggling fits as he sees perhaps the greatest country on this green planet going down in disarray and unable to solve a political crisis that can potentially spell doom for millions of its denizens.