“I was going home after 71 years”: The emotional ‘homecoming’ of an Indian in Pakistan 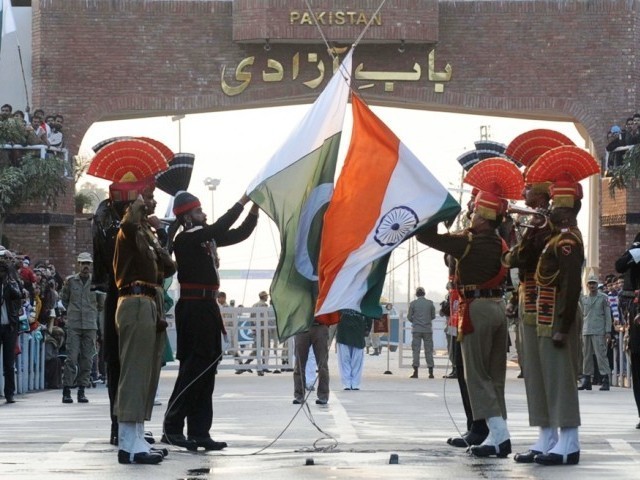 On December 21,2018, I crossed the white line at Wagah Border for the first time. PHOTO: AFP

I mumbled something along those lines to passengers sitting beside me, while taking a flight from Karachi to Islamabad on Christmas morning.

Late in October, a friend of mine who is like an elder brother and a bitter critic of Indian state policies, asked me for my passport. I quickly took some pictures and sent it over to him. A week later, he sent me an affidavit with an invitation to his daughter’s wedding in Karachi that was to be held in late December.

And that is how my journey of going home began.

It is quiet pertinent to share my family origin, given my ‘unusual’ interest in Pakistan.

I belong to a family with roots in Potohar which is around Pindi. We were uprooted in the upheaval that accompanied the Partition of the subcontinent 71 years ago. Cyril Radcliffe had first separated the people by drawing a line between them and then the affairs of the state made it impossible to maintain a kinship between people who had lived together for thousands of years and shared common heritage.

When it looked like I might actually cross Radcliffe’s line, I began going through a tumult of emotions. It wasn’t overwhelming initially; however, as the day to leave grew closer, I somehow lost the sense of balance and composure. It felt no less than a pilgrimage to me. To visit the land of your ancestors, land of your people and your soil is a sacred concept in ancient beliefs and that is something I identify with. I had essentially grown up with my late grandmother reminiscing about our home in Potohar. The home where she was born, where she spent a large part of her life, where she got married and had kids, these memories and places remained very dear to her.

While others who migrated had reconciled and knew India as their home, my grandmother had not forgotten where she came from and always spoke fondly of that life. Listening to her talk about her memories, I grew close to that home of the past.

On December 21st, I crossed the white line at Wagah for the first time. The first Pakistanis I met were the ones I had already been talking to on social media and on the phone and thus they meant a great deal to me. Over the next many days, I realised that Pakistan had somehow preserved and retained what existed 71 years ago; its culture was more organic and full of feelings.

On the day of my arrival, I spent a good while at the Lahore Airport since my flight to Karachi had been delayed for over six hours. Azeem, a Facebook friend from Lahore who was travelling back home from Karachi, had just landed at the Lahore Airport when he discovered on Facebook that I was around. He called me on Messenger and we were overjoyed at this chance and manner of meeting. It was some coincidence!

After arriving in Karachi, I met many people who I felt a very strong bond and kinship with and something within me spontaneously reciprocated the love, affection and warmth. There were four other visitors from India and they were all received with the same fondness. I had brunch, lunch and dinner invitations the next day and had many visitors lined up. However for me, the most significant leg of this visit was only beginning.

On Christmas morning, I was struggling to keep my composure as I had a flight to Islamabad later in the day. Oddly enough, those standard chores ahead of the flight managed to divert my thoughts and attention for some time. However, as I comfortably sat in the flight that Christmas morning, the avalanche of emotions came rushing back with its absolute and final force. Two passengers sitting beside me offered me a tissue and that’s when I told them I was going home after 71 years. Throughout the journey, I kept looking at what appeared to be the landscape of Potohar, starting with the Salt Range.

Upon landing at the Islamabad Airport, I could sense that I was home. I had journeyed to the land that’s my own and as my friend and host in Islamabad put it, the land of my ancestors. There is something about strong roots, roots that go deep. They are often felt for a very long time; they resonate for long or possibly forever. However, fate often dictates a different course for individuals, communities and nations.

Over the past few decades, the Indian state, media and society have cultivated a picture of Pakistan that is far removed from reality. I can say this because I witnessed the reality firsthand during the 11 days of my visit to Karachi, Islamabad and even Lahore, albeit that was only for a few hours due to transit. The experiences I had in Pakistan go beyond words. If I were to venture describing them, I would only say that they defy all negative stereotypes that India and its people have associated with the country. I came across no hostility or negativity during my time here, which is often a misconception ascribed by visitors. With the kind of experience I had in Pakistan during these 11 days, I feel we do a great disservice to our common humanity by putting a premium on politics.

My visit to Pakistan had a very selfish and personal agenda: to touch base with my roots. I wanted to be able to go deeper and farther into the past that I had grown up hearing and feeling so much about. It is probably apt to mention another visitor, a pilgrim who managed to create something enormous out of a very poignantly-felt first visit. This first visit was followed by many more and it gave life to a cause: to rediscover and highlight a heritage lost. Amardeep Singh’s campaign is only gaining strength with each day. His first visit was also made memorable due to his strong feelings and the warmth, love and support he received from several ordinary Pakistanis, who joined him in his campaign with all their passion and all their earnest.

I would also like to thank the many people who made this visit a memorable one: Malik Rashid and Rabi Bashir in Lahore, Tariq Jamil Khan, Dr Yasmin Qazi and Dr Fasih in Karachi, Dr Uzma Anjum, Dr Omar Qureshi, Haroon Mustafa Janjua, Fatehul Mulk Ali Nasir and Osama Malik in Islamabad. There were several other individuals who out of love and affection did so much for me that I hope I never forget that feel of Pakistan, one of pure and unbridled joy. It restored my faith in the goodness of humanity.

I went to Lahore from Islamabad on December 31st and returned to India via Wagah on January 1st. Every time someone asks me if I have come back home, I correct them and tell them that I have come back from home.

The author is currently employed with a technology company in Gurgaon, India. He comes from a family that has roots in the Potohar region of Pakistan, and has a deep interest in the region's shared history and heritage. He tweets @rahuls_77 (twitter.com/rahuls_77).