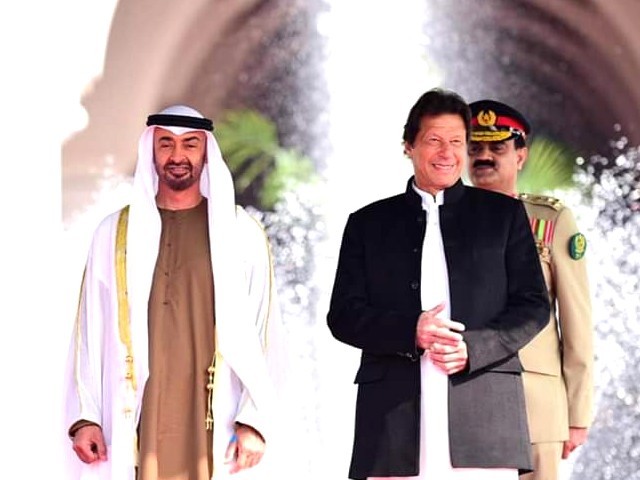 The hugely successful visit of Abu Dhabi Crown Prince Sheikh Mohammed bin Zayed Al Nahyan (MBZ) to Pakistan a week ago represents one of Prime Minister Imran Khan’s greatest foreign policy accomplishments yet, because it proved that his country’s ‘balancing’ act between regional powers is capable of turning latent rivals into trusted partners.

The Pakistani and Arab media are celebrating MBZ’s hugely successful visit to Pakistan and lauding the $6.2 billion support package he provided to the South Asian state. The personal camaraderie between the Emirati leader and the Pakistani prime minister was on full display for the whole world to see, proving that whatever distrust might have emerged in 2015 – after Islamabad refused to dispatch troops to assist the joint Saudi-Emirati war in Yemen – it has dissipated and been replaced by nothing but the best feelings towards one another.

This is an astounding reversal of the geostrategic situation in recent years, after it seemed like the decades-long Pakistani-Emirati strategic partnership had become a thing of the past, following the fallout over Islamabad’s independent decision years ago and India’s resultant exploitation in order to position itself as the UAE’s new regional ally. Nevertheless, in spite of the positive advancements in Indian-Emirati relations since that time, including most notably the agreement late last year to jointly invest in Africa, PM Imran was able to cleverly leverage his country’s ‘balancing’ act in order to save one of Pakistan’s most important partnerships.

The Saudi path to success

It is well known that MBZ mentors Saudi Crown Prince Mohammed bin Salman (MBS), who hosted PM Imran after the election during his first overseas trip as Pakistan’s new leader, and agreed to invest $10 billion in various projects in his country. Reports are now circulating that his upcoming reciprocal visit to Pakistan will see the future Saudi King increase his investments up to a total of $15 billion, which is proof that Pakistani diplomats have been working very hard behind the scenes over the past couple of months to secure such lofty support and might have coordinated it with the UAE.

After all, with MBZ being MBS’ mentor, it’s unrealistic to think the two didn’t discuss their respective Kingdoms’ relations with their shared longstanding Pakistani partner sometime throughout the course of their ‘father-son’ relationship, especially after PM Imran’s visit to Saudi Arabia and prior to MBZ’s own visit to Pakistan. PM Imran’s visionary leadership in trying to pioneer a ‘balanced’ foreign policy all throughout the Mideast and the greater realm of Afro-Eurasia is evidently paying off, after he won MBS’ trust and probably got the crown prince to put in a good word to his mentor about his guest.

The reason why it’s so important to emphasise all of this is because the UAE could have been Pakistan’s latent rival if previous analyses were correct about the fears some in the Emirates had about the China-Pakistan Economic Corridor’s (CPEC) terminal port of Gwadar one day replacing Dubai and Abu Dhabi. That strategic forecast might have been made by those entrusted with securing the country’s future interests and gaming out possible scenarios, but it could also have been taken advantage of by third parties such as India to drive a deeper wedge between the UAE and Pakistan after 2015.

‘Balancing’ away the hybrid war on CPEC

Relations did indeed noticeably cool over the past four years, but PM Imran’s ability to credibly position Pakistan as a neutral ‘balancing’ force in Mideast affairs through his country’s intensified partnerships with Saudi Arabia, Turkey, and Iran proved to the UAE that CPEC isn’t aimed against any single country and is instead an all-inclusive integrational project for connecting China to the rest of Afro-Eurasia via this strategic trans-Pakistani overland route. This realisation – backed by actions such as the reinvigorated Pakistani-Saudi strategic partnership – must have assuaged any lingering concerns the Emiratis may have had about Pakistan’s intentions.

It’s important that Pakistani-Emirati relations are back on track because the UAE could have been a formidable opponent of both the South Asian state and its Chinese partner. The UAE has rapidly expanded its influence across the world via its network of shipping ports and airports, as well as the military bases it obtained in the Red Sea-Gulf of Aden region throughout the course of the war in Yemen. Instead of potentially leveraging these to challenge and ultimately ‘contain’ China via the hybrid war on CPEC, the Emirates will now cooperate with it on equal terms inside of Pakistan itself.

What PM Imran pulled off with Pakistan’s successful rapprochement with the UAE is nothing short of masterful, because he turned a latent rival into a trusted partner after first proving his country’s peaceful win-win intentions to MBZ’s mentee, MBS. That event, more so than anything else, showed the Emirates that Pakistan shouldn’t be regarded as a future competitor, like some in India had been hyping it up to be for their own reasons, but rather as a brotherly nation that’s consistently maintained excellent relations with the influential House of Saud.

Once any doubt about that was finally dispelled, it was only natural for MBZ to visit Pakistan and reaffirm the strategic partnership between the two states. That monumental occasion marked the success of Naya Pakistan’s ‘balancing’ act between regional powers and confirmed that it is capable of reaping very real geopolitical results. Going forward, Pakistan must expand this ‘balancing’ strategy from the Mideast to the rest of Afro-Eurasia and keenly take advantage of the various CPEC branch corridors (CPEC plus, including both mainland and maritime ones) in order to finally become a pivotal player in Eastern Hemispheric affairs.