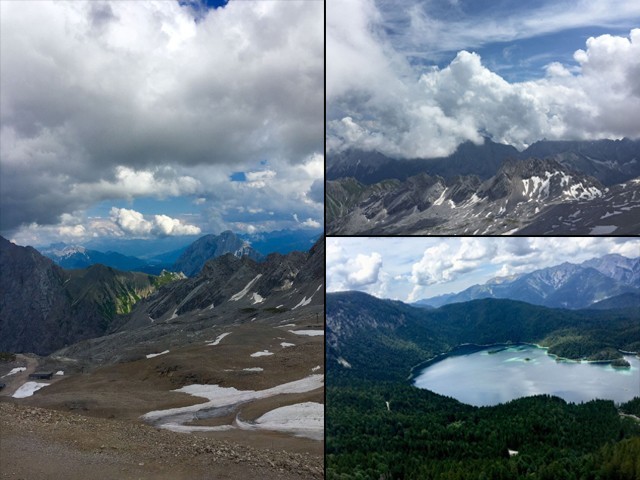 With a map in hand and keeping a lookout for signs for the Reintal route, I set off for Zugspitze Peak. PHOTO: ANAM GILL

My love for mountains grew last year when I got an opportunity to climb Baaushal Peak (5,720 metres) in Pakistan and became part of the first female expedition of the country. Mountain climbing still hasn’t garnered much attention in our part of the world, even though the natural beauty Pakistan has to offer is breathtaking and incomparable. I can say this with confidence because I recently climbed the highest peak in Germany known as the Zugspitze Peak (2,962 metres).

There are more technical routes to the Zugspitze Peak but I decided that going through the Reintal Valley was my best bet at getting to the top. In addition, some local friends had informed me that this was the most scenic route, albeit a longer one. My decision to take this route was based on the fact that I was climbing alone. I believed I could make it to the top after looking at the elevation profile which seemed pretty simple especially after the Baaushal Peak which involved some technical gear. The Reintal Valley route fell in the hiking category; therefore, my climb didn’t involve any technical gear. There are surely more complicated routes to the Zugspitze Peak that involve technical equipment which is easily available in that area.

The start of the Reintal Valley route was easy to find. It starts right behind the Olympic Stadium in Garmisch-Partenkirchen and fortunately, I was staying nearby. I started my hike at 5am and was reminded constantly of the giants of Karakoram, Himalayas and Hindukush throughout my journey. The Alp range seemed like a miniature version of some majestic mountain ranges in Pakistan that I have seen while traveling extensively in Pakistan. Since my father was in the army, he was posted to a new place every year and that gave me a chance to explore the beauty our country has to offer. This frequent moving is probably also the reason why I am such a footloose who craves travelling. 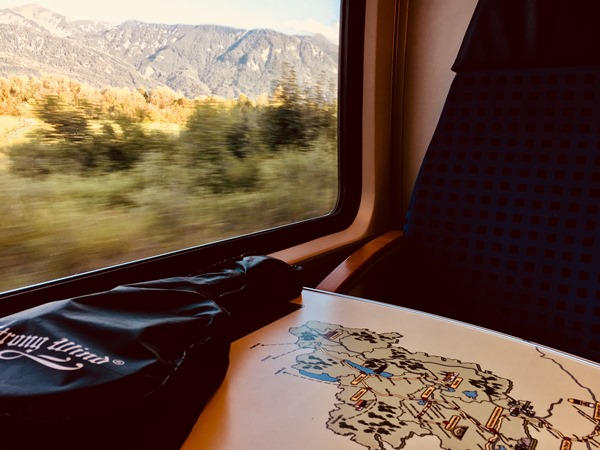 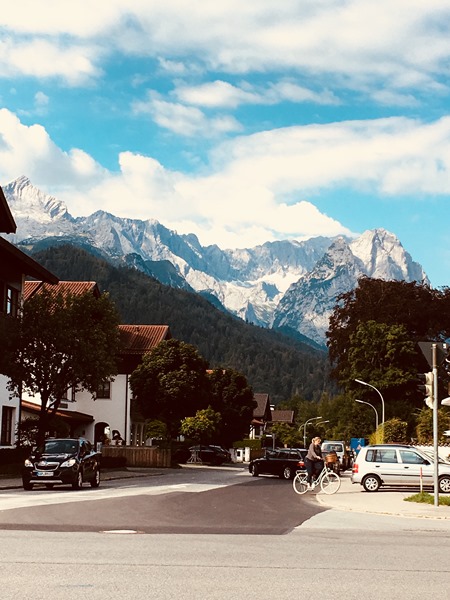 With a map in hand and keeping a lookout for signs to the Reintal route, I set off for the Zugspitze Peak. Funnily enough, at the beginning of my hike, I took a wrong turn and detoured off the route, but thankfully I found my way back. The route follows the river for several hours through the beautiful and stunning valley. 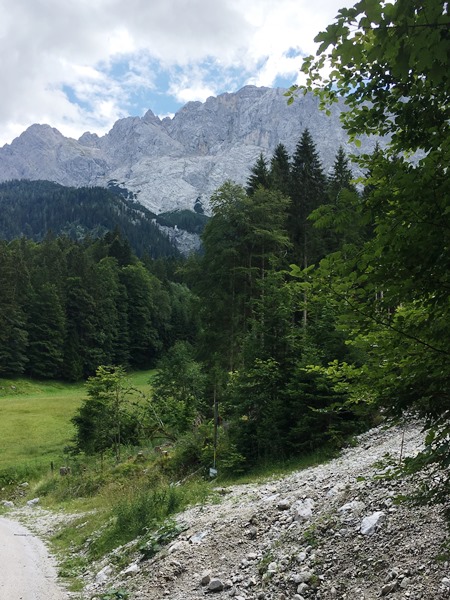 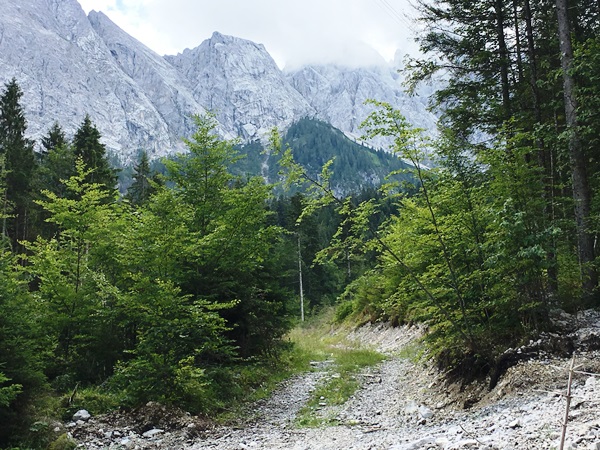 The crystal-clear flowing water was refreshing to see especially on that hot day; luckily it was a sunny day with little or no clouds in sight. There was very little elevation gain at this point and I could even see some people with bikes on the route. 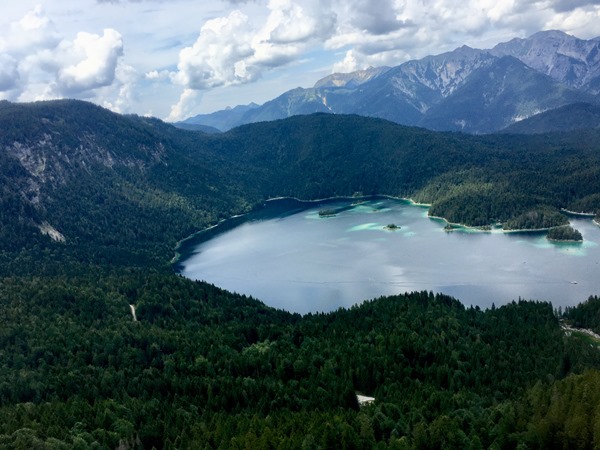 The route also had various huts that could be used by weary hikers as a stopover or to spend the night. This was interesting for me to see since my experience of mountain climbing at home was very wild, raw and touristy in comparison. In Pakistan, people would camp at different locations before the actual ascend. The only proper mountain lodge that we came across during the Baushaal hike was the one in Hushe Valley, which was built as part of a Spanish co-operation project in Pakistan conducted by an NGO called Sarabastall.

The huts on my way to the Zugsitze Peak were very cozy and popped out amongst the beautiful valley. They also provided food and refreshments which made it a great place to rest and take a breather before continuing your journey.

After passing by the last hut, the real climb started. Weaving through the valley and a few cow pastures, I had a clear view of the trail up the mountain. As you climb, the view starts to get spectacular. Being amidst nature is rejuvenating and is a good escape from the daily chores of life. At one point, I wished I had brought my ukulele with me; however, one should always travel light when going on such adventures. 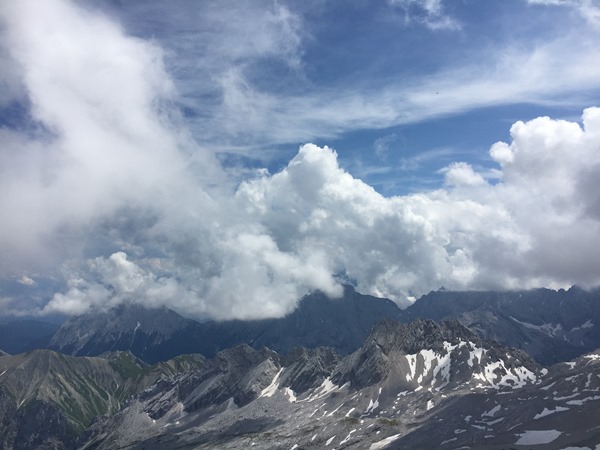 At one point, the trail split but that didn’t make any difference as the two paths come together at Knorrhütte, which is another hut in the area. After taking a small break at the hut, I continued the climb to the Zugspitze. It was 1pm at that point as I slowly felt the elevation. 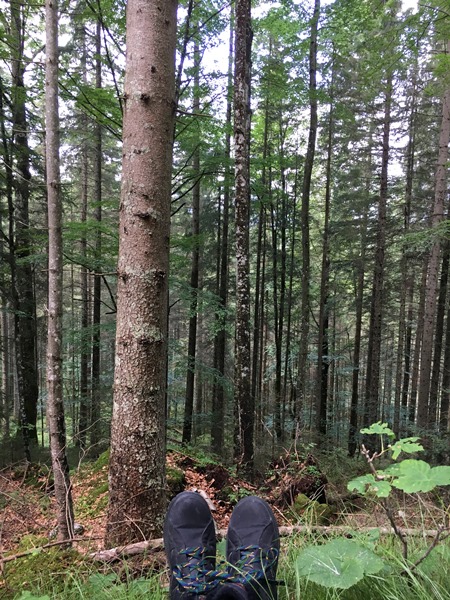 As I went higher, I came across patches of snow but since it was a uniquely warm July, I didn’t need any extra gear; my hiking boots were good enough. I also got to see ski lifts and an observatory. As I headed up the steep slope near the observatory, the path seemed clear but it felt tricky. Since it was steep with a lot of small rocks, a casual slip could cost your life. To make it easier for the climbers, the path had some cables for support as the trail went further up. Although if you have been trained and schooled in the Karakoram ranges, there is no need for you to clip in. 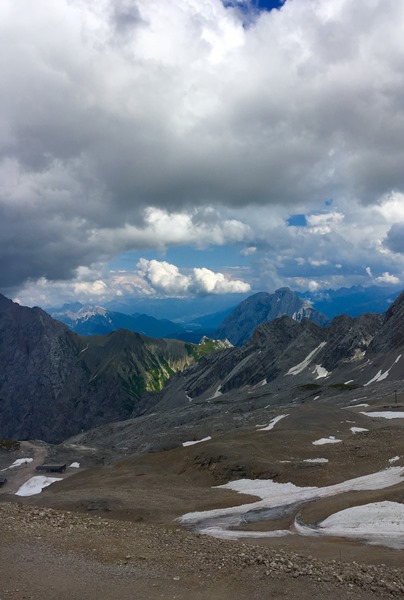 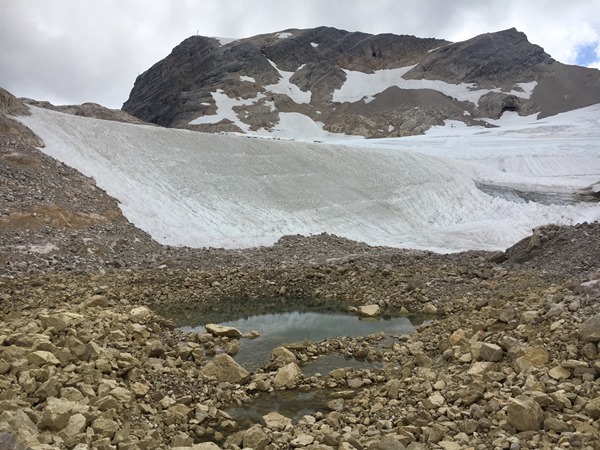 It felt great to finally reach the top of the mountain. At the top, I could see cable cars carrying visitors to the summit. I also brushed up against the border of Austria, which was pretty exciting. I reached the summit at 3pm and it was a unique experience in itself. I found a restaurant, an espresso bar, souvenir shops and many more touristy places at the top. Dare I say the presence of ‘technology’ dulled the impact of the journey a bit and the excitement of being on a mountain faded a little. The place was very commercial and even had perfect phone signals. So much for experiencing nature! I also saw many people forming a queue to take a picture with the cross at the highest point of the summit. Not wanting to be in a queue, I dropped the photo idea and instead decided to have lunch. 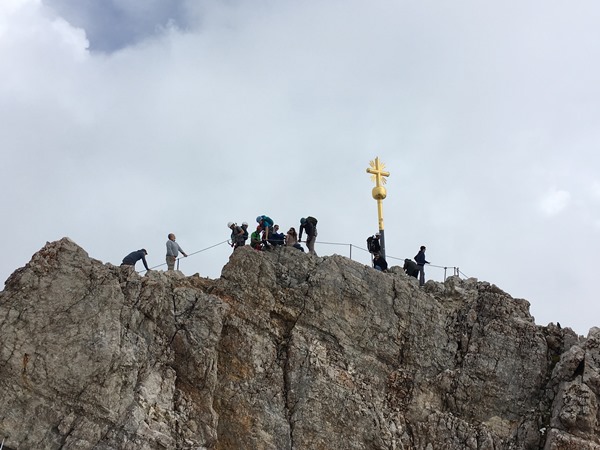 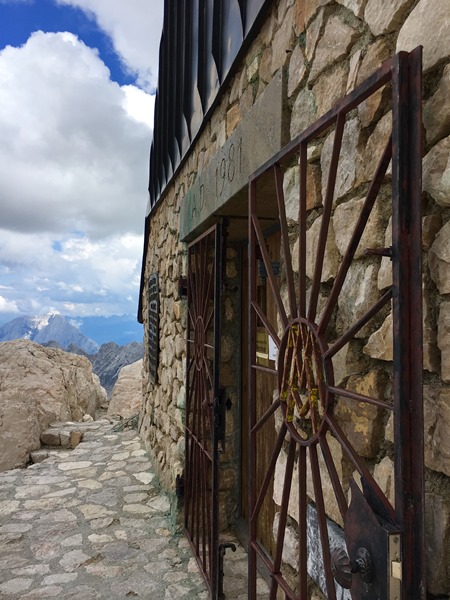 Even though the hike down would have been an easy one and would only take six more hours, I was tempted looking at the cable car taking the visitors down and decided to take one back myself.

Even though the journey to the Zugspitze Peak was amusing, I have yet to see the likes of the majestic beasts we have in Pakistan. If we could only preserve our nature and landscape while also making them accessible to tourists, Pakistan can attract so many visitors from all over the world. We are blessed with so much beauty and we need to recognise and value it. Without a doubt, my first ever climbing experience in Pakistan a year ago remains unmatched and I can’t wait to have another such experience in Pakistan soon.