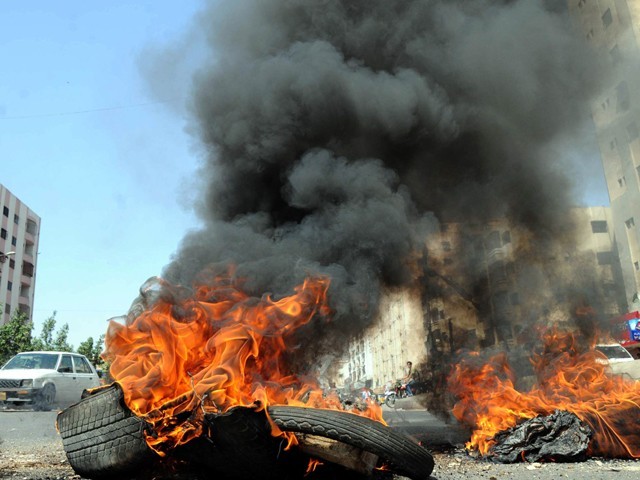 You will know you’re in the middle of the riot if you can see burning tyres lining the roadside and charred remains of buses and vans. PHOTO: RASHID AJMERI

Amidst the violence and turmoil Karachi has witnessed recently, the youth of our nation has not remained silent. Below are the opinions of three teenagers on how they feel about the current situation in Karachi.

“Four killed as a wave of violence haunts Karachi” read a headline of the nine o’clock news bulletin.

I felt terror as the newscaster went on in a monotonous tone. We have formed a shield around ourselves and no matter how many bullets shower over this shield, we stay unscathed, thanking god for the protection he has provided us with.

“All the shops will remain closed on Monday,” said a man dressed in a black suit and tie.

I have learnt to turn a deaf ear to all these announcements. I know that by tomorrow, I will be venturing through the hustle bustle of Zamzama, shopping for Eid clothes. Despite an awareness of all that is happening, perhaps, forty miles away, I pretend to stay ignorant.

It has been said that when the youth of a country feels helpless, it depicts the downfall of the nation. I feel that in spite of every youth’s urge to bring about change, we are so desolate by all that goes on around us. This combined with the corruption-laden system, where one can only get ahead by the people one knows, has lead to a feeling of immense helplessness county-wide.

I look around myself and wonder how we will ever prosper when we are divided into groups which bring no development in the country. I wonder why we have become so hardened that we no longer mourn the death of our fellow Karachiites. I often ponder over how a person does not die of guilt when he has killed his brother? When just the thought of this horrendous act gives me goose bumps, how can these murderers sleep in complete peace?

As a fifteen-year-old, I do not claim to be an analyst on the PPP- MQM dissidence. However, I do know that as I write this in a commodious classroom of the CAS school, there are children here whose fathers belong to these very parties. Then they are those who are not going to school for either financial or security reasons. Finally, there are those like me- youths in ardent hope of bringing about change.

With the amount of violence we have witnessed in Karachi recently, I often wonder if the city will end up burning to ashes. Although I try to remain positive, it devastates me to the core when I see people dying and the police doing nothing. These killings have shown us how weak the government actually is. Our country is like this because power lies is in the wrong hands. Those who can do something won’t do anything, and those who can’t do anything want to do something—like you and me!

Is it not sad that criminals have better weapons than the police, which are mostly corrupt anyway? Why can’t the government get them newer weapons or pay better salaries? The purpose of paying taxes is for the welfare of our country not the welfare of corrupt politicians and their families.

Lately, we can only dream of a walk on the streets as it is extremely unsafe to walk outside these days. Thus, all we do is study, watch television or spend time on the computer. One of my friends has even left the city. The plans we made together, the movies we watched, and the restaurants we went to are now only distant memories.

The situation in the city may be bad, but I still love Karachi a lot. This is because I have spent most of my life here, my home is here, my school is here, and my friends and family are here. So practically, Karachi for me is my entire world.

Although we are fortunate not to have been directly affected by the wave of violence, we can’t escape from being indirectly affected in some way. I’m emotionally affected when I watch stories of people dying on television- aren’t we all? But I still think our city will see light once again. Being negative or leaving the city to settle elsewhere can never be a solution. We should not abandon our city when it is in trouble.

Karachi was once called “the city of lights”- but now it’s the city of ‘off’ lights. In the 20th century, apparently Karachi was the city that everyone wanted to live in. My parents told me that a person could walk from place to place without so much as even a small fear that something might happen to them. Now if people do walk outside, they will probably be carrying a gun somewhere inside their bullet proof jackets, so be careful when you try to approach them.

Karachi was once the capital of our beloved country, Pakistan and now it is probably known as the capital of major destruction. In the past week, as we all know, about 100 people have been brutally murdered. This is horrifying, but sadly it is the Karachi we live in today. My mother often used to reminisce about a Karachi 30 years ago saying:

“Karachi has a beach, it has good shopping, and everything you would want for your hometown to have!”

Now the only thing coming out anyone’s minds about Karachi is:

This statement speaks volumes, as sometimes it is impossible to get out of your homes to go to the beach, to go for shopping or to mingle with people. An apt example of being jailed in your own home would be today, August 23, 2011.  All of my friends were texting me last night, asking whether I was going to school- now that shouldn’t be a question should it?  When I replied in the affirmative asking them the same question, the answers were all exactly the same:

“No, dude, my parents aren’t giving me permission to go to school tomorrow. The conditions in the city are not good.”

What is wrong with this world?! Parents having to allow their children to go to school is the most upside-down thing that I have ever heard.

All we can do now is pray for Karachi’s future.  People are, indeed, dying and it really isn’t that safe to be roaming about on the streets unarmed.  All I can say is that I don’t care what happens, I will not stop living my life because of some animals, who are sadly on the loose, with toys they still don’t know how to play with. Moreover, I will definitely never say that I don’t want to live here anymore.  This is Karachi.  This is my home.