Walking with the Incas in Machu Picchu, a land where the ancient gods still reign 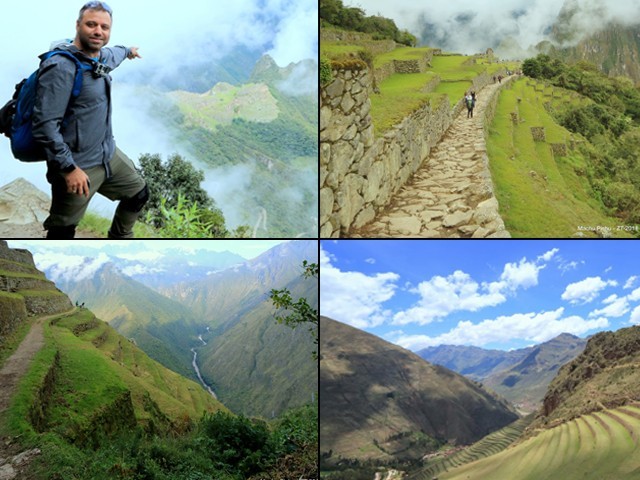 I could not help but send a silent prayer to Pachamama for letting me see her wonders. PHOTO: ZAURAYZE TARIQUE

This age-old quote from the Andean highlands defined the code of life for a nation that rose from oblivion to become one of the greatest cultures of its time – the Inca. Today, after 500 years, one of its architectural marvels, Machu Picchu, is one of the Seven Wonders of the World.

Cusco, the ancient capital of Inca, was my first stop on the way to Machu Picchu. Situated at an elevation of 3,000 metres, this acted as a stopover and helped me acclimatise to the high elevation. The town was full of tourists, both young and old. Many were rejoicing in the memory of the marvel they had just witnessed, while others still looked forward to witnessing more. There was plenty to see in and around Cusco, and this is where I first got acquainted with the Incas.

Cusco also houses the largest temple of the Incas, known as Coricancha. After spending two days in Cusco and its nearby towns, I was ready to embark on the four-day Inca trail. 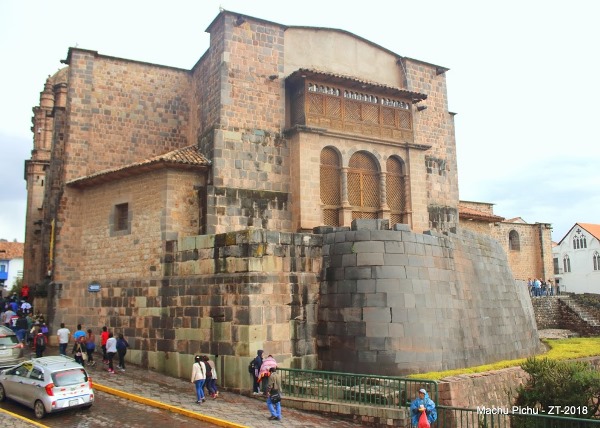 Coricancha: The city of Cusco

Sacsayhuaman: the Inca ruins near Cusco

The trail head started at 82 kilometres, a half-an-hour drive from Ollantaytambo. This is also where I met my guide Oswaldo, the cook Rosario, and a team of four hard-working, sturdy and light-footed highland porters. These journeys would have been impossible if not for these porters. 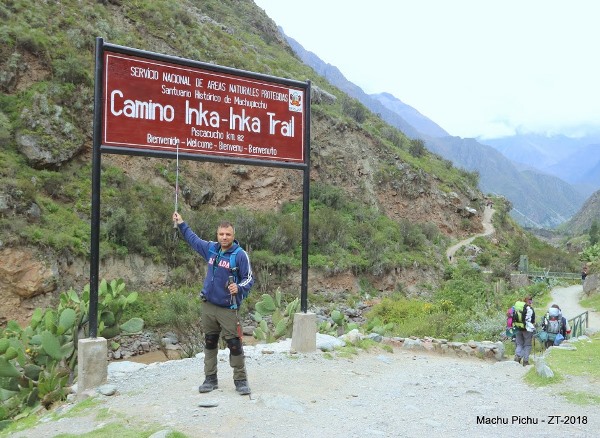 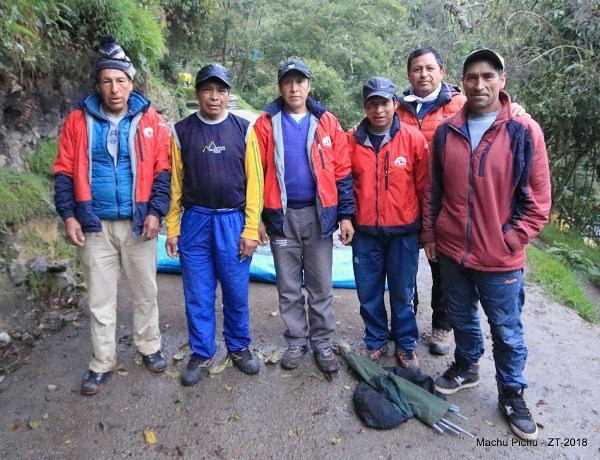 This is also where I saw the wonder that is coca leaf in action. Seeing these porters chewing a bunch of coca leaves and running up and down the trail, I imagined how the Incas must have had runners between their fortresses and the miracle coca plant.

The first day was a gradual 12 kilometre hike with a net gain of 300 metres to a final elevation of 3,000 metres. We hiked along the Urubamba River for the most part before climbing up to Huayllabamba to stay the night. The highlight of our day was Willkarakay, a mountainside agricultural site that serves as a beautiful testament to the surprises the trail holds before ultimately delivering to you its final jewel at Machu Picchu. 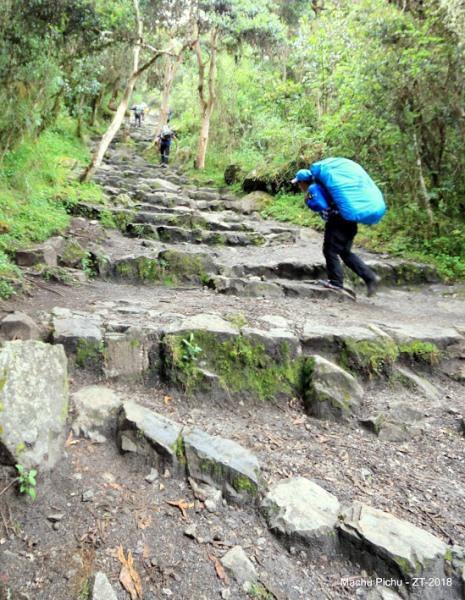 This was by far the toughest day of the trail. Right from the start, the trail wound upwards at a staggering incline. We climbed up to 4,200 metres at the Warmiwanuska or the Dead Woman’s pass, before climbing 600 metres down to spend the night at Pacaymayo.

Unlike your usual trails, the Incas used the mountain to their advantage. This implied using stairs rather than a straight path. In total, the four-day trail has more than 20,000 stairs that you climb up or down. 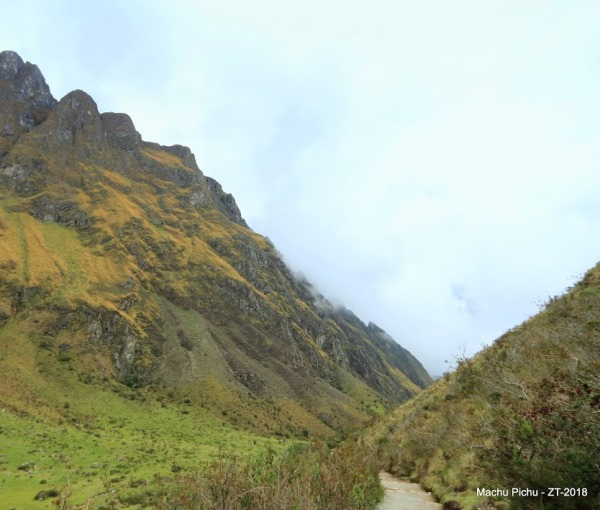 We reached the top in five hours. The Urubamba now resembled a silver thread somewhere down below. Altitude sickness was a serious problem here, as the sudden elevation gain was drastic enough to cause headaches and fatigue.

After a short stay at the top, we climbed down the trail to Pacaymayo. The climb down was particularly treacherous because of the pouring rain. Many a hiker slipped that day, especially when climbing down the stairs – no wonder the stones had been polished thoroughly after centuries of use!

This was a long day in terms of distance; 18 kilometres in total. However, almost all of it was downhill, apart from the first couple of hours. We climbed up to the Runkurakay Pass at 4,000 metres, before climbing down all the way to WinayWayna at 2,665 metres, right at the gateway of Machu Picchu.

While at the high point, my guide asked me to climb a bit more to reach an altar. He wanted to perform a ceremony and pray to the ancient gods, and used three coca leaves in order to do so. Each leaf represented the three stages of the world; the top or the heavens represented by the Andean condor, the middle (where the Inca lived) represented by the powerful puma, and the part underneath represented by the serpent.

It was almost all stairs from then on to WinayWayna, and the majority of this was the original Inca trail. The climb down was made interesting by passing through several ruins at Phuyupatamarca and Intipata. As the trail passed right through Intipata, it allowed us to see aqueducts, water fountains and living quarters; small-scale marvels of Incan architecture. 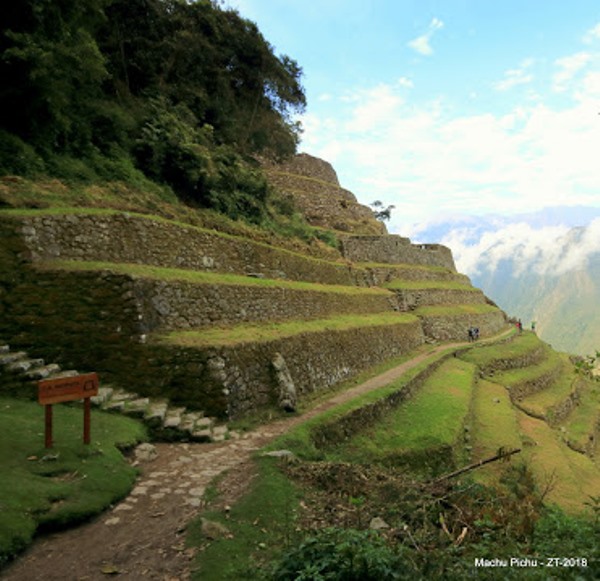 This was the day it was all supposed to come together. From here, it was a simple five kilometre walk to the ruins.

However, the trail held its biggest surprise right here. Around three kilometres into the trail was the Inti Punku or the Sun Gate. This acted as the guard point which was accessed by climbing a narrow flight of 53 stairs, cleverly named by the guides as “the gringo killer”. 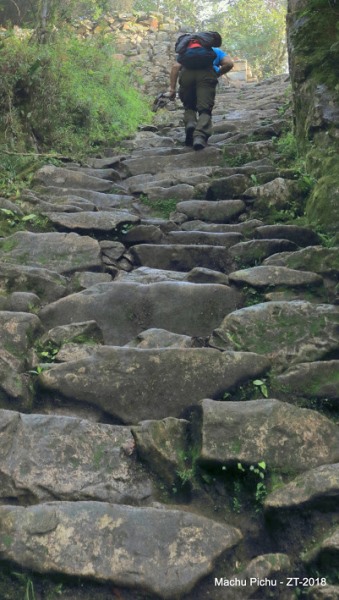 Climbing the last bit of stairs – the gringo killer

I was told that from this view point, on a clear day, you could see the entire city of Machu Picchu, with its terraces, the central pyramid structure, the temples, the living quarters and the lush gardens. The city was shaped like a condor facing the Huyana Picchu Mountain. 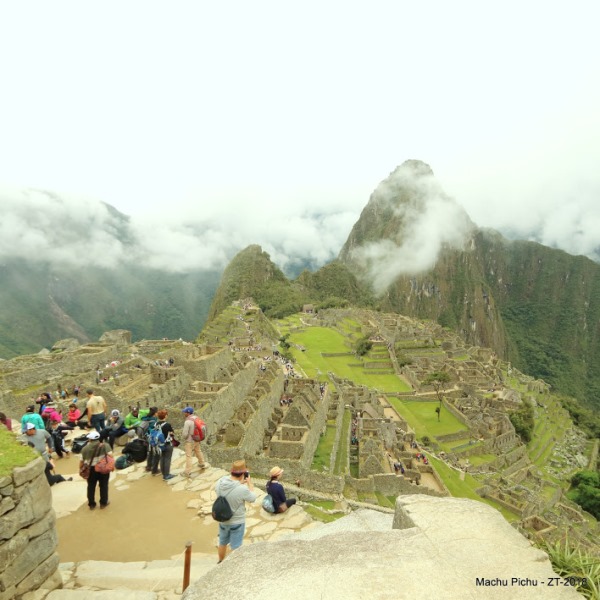 By the time we reached the Sun Gate, the weather had turned cloudy and there were several hikers gathered here. One by one they all left, until it was just Oswaldo and I sitting on the Inca laid stone wall. I told him I wouldn’t leave without making it all the way. He calmly replied,

“In that case you must blow in order to move the clouds away.”

Laughing at the thought, we both blew into the wind! For that one moment, the cloud cover parted and we got to see the site we had travelled all this time for. 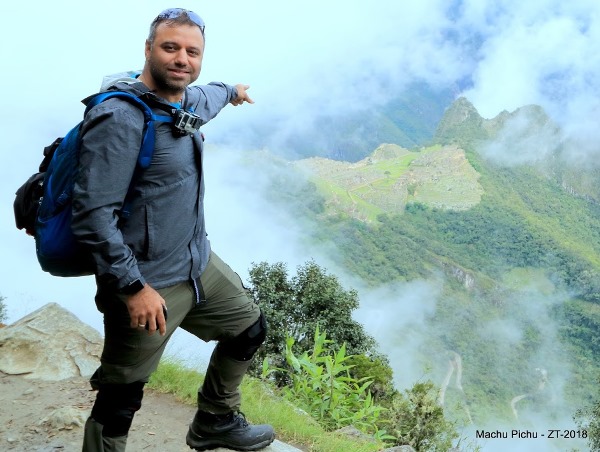 And then the clouds parted!

When you view the city from this vantage point, you can close your eyes and it’s easy to go back 500 years and imagine the Inca pilgrims, with their Lamas in tow, climbing over the Sun Gate and setting their eyes on what must have been a bustling place at the time, with banners, thatched roofs, chants of religious ceremonies and music. 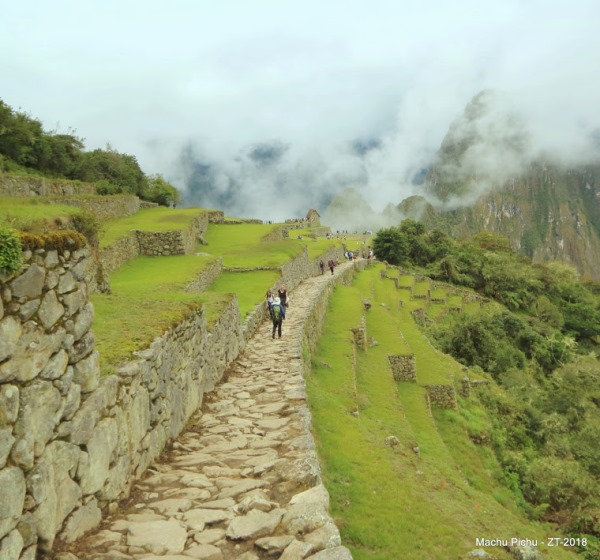 Pictures cannot do justice to this architectural marvel. As you walk through the main entrance, you are welcomed by terraces, two-storied huts, barns, grain storage sites, the king’s chambers, the central structure of the Sun Temple, and the cleverly carved Condor Temple. These all lead up to the sundial on top of the central pyramid. 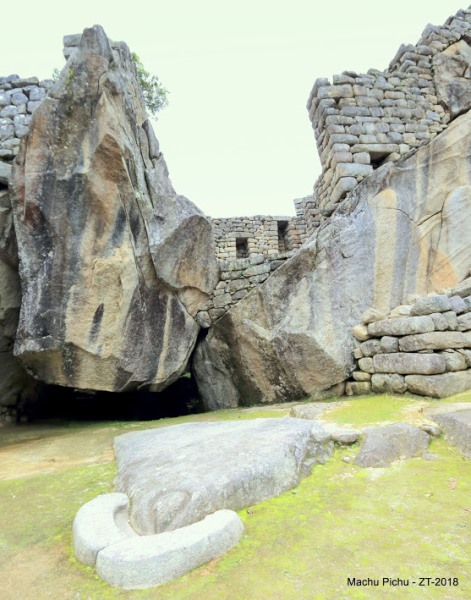 Here, you get to see for yourself the excellence described by Hiram Bingham (the modern discoverer of these ruins) as you visit the king’s chambers or the temples, where stone after stone has been immaculately placed, like blocks of lego, finished to a razor edge straightness and miraculously held together without the use of mortar.

The immaculate walls of the king’s chambers 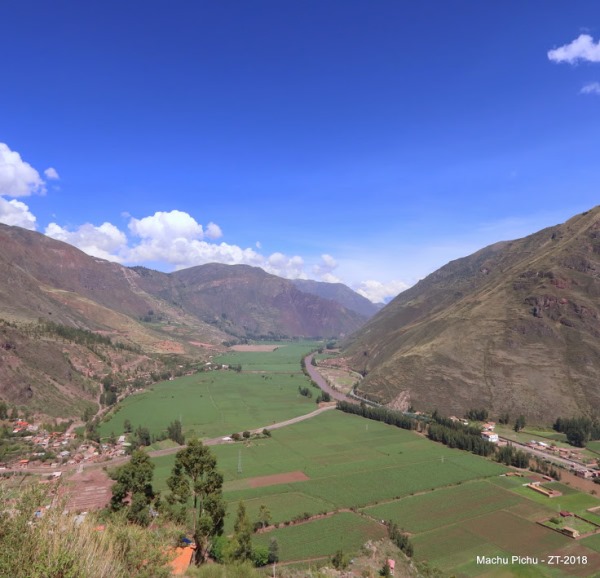 Finally embraced by the satisfying feeling of having ‘been there, done that’, we took the bus back to the city of Aguas Calientes for a well-deserved lunch, and onward to Cusco using the Peru Rail.

As the train rushed through corn fields, in the shadows of the snow caps and amidst the sounds of the Urubamba River, I could not help but send a silent prayer to Pachamama for letting me see her wonders. Then, I calmly sat back, closed my eyes, and chewed on my coca leaves.

You too can be a part of the journey in just five minutes over here:

The author is an engineer by profession, an oil and gas executive by design and a liberal, free spirit by nature. He tweets @zaurayze (twitter.com/zaurayze)