Kashmir graves: Where is the humanity India? 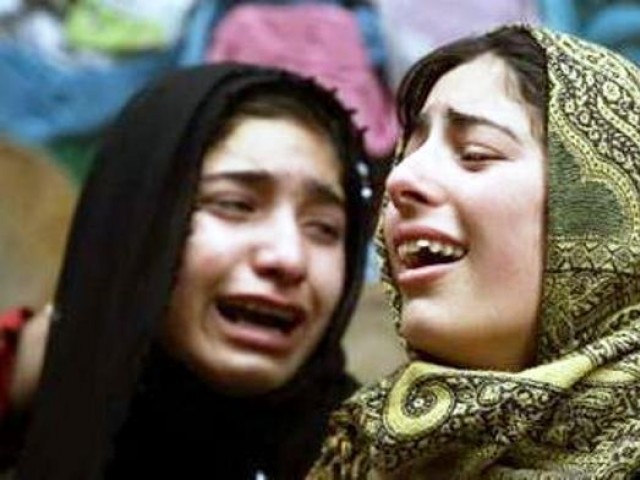 Someone, somewhere in Kashmir, a mother or father, a wife or a sister, is grieving and desolately wondering whether those numerous unmarked graves hold their flesh and blood. PHOTO: REUTERS

Ongoing famine in Somalia; the Libyan rebels capturing the world’s imagination as they oust Qaddafi; Israel bombing Gaza after Hamas lashes out and more violence in Karachi. After one week of news in our world, I am reeling. These tragic events that I have touched upon do little to explain the sorry state of our world.

Nevertheless I am going to raise my voice.

Someone, somewhere in Kashmir, a mother or father, a wife or a sister, is grieving and desolately wondering whether those numerous unmarked graves hold their flesh and blood. This image is terribly sad. However, it is the Indian officials’ statement to the discovery of those bullet-ridden bodies that has made me feel sick:

“Indian officials have repeatedly claimed that those buried in unmarked graves were militants – most of those Pakistanis – who were killed in clashes with security forces.”

I’m not contesting India’s right to deal with supposed Pakistani militants, nor am I supporting militancy. However, both Indian and international human rights organizations have shown that the people being killed by security forces are not always militant. Surely that is not the point? How about some common decency and respect? Where is India’s humanity in all this?

Militant or not, these people are lost to loved ones who have been pining for them and desperately hoping for their safety. These nameless bodies were human beings with families, and they deserve more than the official Indian response thus far. What the Indian officials have said is a potent remark about their take on the value of human life.

Surely, India would not be so crude so as to allow this to be another number to be added to the many numbers that already exist in the Kashmir dispute? Dispute- this is such a mediocre word that does no justice to the on-going nightmare the people of Kashmir now wake up to along with graves holding people they just might know.

It would seem that to them that, these bodies, these lives mean nothing – that they are mere targets to gun down in the name of security. This is just wrong. Journalists down-playing this by claiming these graves should not come as a surprise to us, equally shocking and horrible.

So I will say the thing that I am not supposed to say- If this was the other way around and countless unmarked graves had been discovered in Pakistan – the world would raise havoc, and they wouldn’t be wrong in doing so. I, in no way mean to imply that Pakistani officials would do anything about it – they are just as useless as the Indian officials are. What I’m pointing out is the whole world would be incarcerating us and would be right to do so. I’m sure at the very least; we’d be apologizing to someone if not to the world. Why is more pressure not being put on India?

The people buried in these graves, regardless of what they’ve done or haven’t done should be dealt with more humanely. They deserve our respect and certainly something more than to be an unexplained corpse in an unmarked grave. Every single person in this world deserves more than that – but sadly millions and millions will never get it. The bodies discovered in India are a poignant and explicit testimony to the character and calibre we lack.