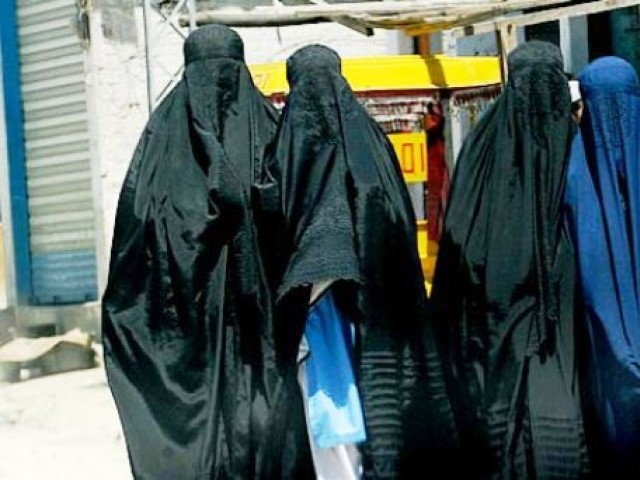 Abaya was an unknown word in Urdu language PHOTO: AFP

There was a land of cavaliers and cotton fields called the Old South. Here in this pretty world, Gallantry took its last bow. Here was the last ever to be seen of Knights and their ladies fair, of Master and of Slave. Look for it only in books, for it is no more than a dream remembered, a civilization gone with the wind.

– An introductory foreword to the film Gone with the Wind (1939)

Civilizations can never be made up, this is all hitherto history has to tell us, but yes they can be ruined to irretrievable notwithstanding. Societies are never absolute in their very essence. This is the natural organic flow of events that weaves the edifice of a society over the time period by encompassing the divergent customs, languages, dogmas and traits. The final synthesis, what we call a society, is the one to impart the distinguishing identity to its adherents. The more firm the foundations of society, the more preeminent will be the identity yielding out of it. Societies are prone to decadence only when they cease to embrace the extrinsic flavors or when become the subject of deliberate acculturation. Later is the case with ‘the land of pure’ which, as for some, is yet to be more pure.

Pure is the word and Arabization is the synonym.

Pure of the specter of the pre-partition Indian identity that was the congenital inheritance of Indian Muslims bestowed on them by the indigenous society that had evolved over hundreds of years by the commingling of various cultures and civilizations.

Plagued by quandary, the Pakistani state, after the partition, was quick to embrace the pan-Islamic identity embellished with salient features of Arabian Peninsula whilst cunningly blending it with religion in order to render it more acceptable for the local populace. The identity engineers considered it the last resort to homogenize the diverse local cultures and vernacular languages by binding them in a construct emanated from religion based identity. That was fall of Dhaka that led to expedition of the Arabization process.

“Since its inception Pakistan has faced the monumental task of formulating its national identity separate from India. Partitioned from the ancient civilization of India, Pakistan has struggled to construct its own culture; a culture not just different and unique from India, but one appreciable by the rest of the world. ..The tragedy of 1971 [when Bangladesh separated] brought a shock to the people and also a heavy blow to the ideology of Pakistan… More or less convinced of their Islamic heritage and identity, Pakistan’s government and intelligentsia consciously attempted to Islamize the country.”

History itself has been the cardinal victim since antiquity in the hands of plunderers who deem it their foremost target for their ulterior motives. That’s what happened here. History, taught in public schools, starts from the arrival of Muslim Arabs and ends at carving a Muslim state out of Hindu India. Everything else has been rendered smokescreen.

The past, prior to Muhammad Bin Qasim, is a direct threat to the engineered Arab identity as it was obviously Hindu-Buddhist so omitted. The puritans, Aurangzeb Alamgir and Ahmad Sirhindi, get all praise since they are in line with the unyielding version of Arab Islam whilst heretic Akbar is accused of creating a new religion ignoring the fact that people were far better off in Akbar’s era. There’s not even a single mentioning of inter-faith harmony Dara Shikow had been preaching given that there’s no space whatsoever for trans-religious approach in a society aimed for adherents of single creed.

Plunderer Mehmud Ghaznavi has been denominated as ‘idol-breaker’ merely to glorify the unified Islamic triumphalism over the misbeliever India. This systematic maligning of young minds is not confined to only government educational institutes but by an act of parliament, passed in 1976, all private schools are also required to follow this curriculum.

“Our state system is the biggest madrasa. We keep blaming madrasas for everything and, of course, they are doing a lot of things I would disagree with. But the state ideologies of hate and a violent, negative nationalism are getting out there where madrasas cannot hope to reach.”

Over the last three decades Pakistan has seen some drastic changes in societal demeanor and etiquettes ranging from language to customs. Dissemination of construct based on the Arab identity is bearing fruit.

Abaya’ that was an unknown word in Urdu language has now become the benchmark of the fictitious morality that is the ultimate result of deliberate assimilation of arid Arab culture. Even the moderate ones are obliged to wear Abaya to meet the newly contrived moral standards of society. ‘Chaadar aur Char Dewaari’ (veiled behind high brick walls) policy of dictator Zia-ul-Haq is turning out to be the worst kind of oppression of women, along with the laws like Hudood ordinance enacted during his regime.

Even the language has not been spared amidst this whole drivel of purification. Article 31/2 (a) of Constitution of Pakistan states:

“The State shall endeavor, as respects the Muslims of Pakistan to make the teaching of the Holy Quran and Islamiat compulsory, to encourage and facilitate the learning of Arabic language.”

A pathetic attempt to make Arabic lingua franca for Pakistan where less than 1 per cent population can understand Arabic?

What about the divergent local languages or even the so-called national language?

The most common but glaring example that may be put forward to underline the predicament is gradual replacement of the Indo-Persian ‘Khuda Hafiz’ with Arabic ‘Allah Hafiz’ implying that Arabic Allah is the only proper word for God.  Khuda is an Indo-Persian term to say God. It is built on the same building blocks that other Indo-European languages use. The English say God, Germans say Gott or Gutt, Persians say Khuda. The G is a variation of Kh and the utt or od is a variation of “uda”. They’re very similar. On the other hand, Arabic is Afro-Asiatic language. By taking a look to other Semitic languages such as Hebrew, they are very near to Arabic flavor. As for instance Jews say Elohim that sounds very familiar while reciting the word ‘Allah’. Where do the attributes of God come into the matter from? Some of the 99 names of God have their origins in classical Hebrew instead of Arabic. So in the view of this logic should those be abandoned too?

“Persian, the language of Mughal India, had once been taught as a second or third language in many Pakistani schools. But, because of its association with Shiite Iran, it too was dropped and replaced with Arabic. The morphing of the traditional “Khuda hafiz” (Persian for “God be with you”) into “Allah hafiz” (Arabic for “God be with you”) took two decades to complete. The Arab import sounded odd and contrived, but ultimately the Arabic God won and the Persian God lost.”

An interesting aspect of this whole phenomenon is the puritanical version of Islam i.e. Salafism/Wahabism that is predominately a phenomenon traces its roots to Arabian Peninsula and has been instrumented by the identity surgeons to homogenize the cultures that have not even an infinitesimal thing in common – consequences are horrible. This unyielding interpretation of Islam puts great emphasis on rituals and codes of conducts than on substance quite contrary to the Indian version of Islam that is marked with local customs evolved over the centuries through intermingling of diverse doctrines.

All religions have two aspects that are theological beliefs related to one’s relationship with divine reality and sociological beliefs comprising of social behaviors dealing with human society. The former remain more or less absolute in their very nature while the later do change with the passage of time when religions go trans-regional.

Problems predominately start erupting when the sociological beliefs are subjugated by state to implement and propagate hidden agendas. These sociological beliefs then lay the bases of hatred, bigotry and misogyny. This is what has been done in land of the pure in the name of purifying religion by escalating a particular expression of religion to the stature of only-viable-interpretation-of-Islam. God has been portrayed as some Arabic speaking deity who is restricted to ethno-linguistic boundary which is clearly in contradiction of message of religion.

As the Holy Quran says:

“Another of His signs is the creation of the heavens and earth, and the diversity of your languages and color. There truly are signs in this for those who know” (30:22). There is also this famous verse: “O people, we created you from the same male and female, and rendered you distinct peoples and tribes, so that you may know one another.” (49:13)

As for elaborating further the above discussed phenomenon take the example of Madrassas in Pakistan. They are the social sites for the reproduction of Islamic orthodoxy. Hence, to say that the ideological orientation of madrassa education is conservative is to state the obvious.

The madrassas in Muslim South Asia teach a curriculum known as Dars-i-Nizami, first introduced by Mullah Nizamuddin Sihalvi (d.1747) who was a scholar of some repute in Islamic jurisprudence and philosophy in Lucknow. But this was only during the last two decades of twentieth century when they became involve in militancy despite having the two hundred years apathetic history.

The curriculum of madrassas has been the same for about 150 years which is most pacifist in nature. Its approach to Islam is ultra-conservative, literal, legalist and sectarian, but definitely not revolutionary or militant. If it were the militant tendencies of madrassas could have been observed during the most volatile events like: partition, fall of Dhaka and Indo-Pak wars.

What happened during the last two decades of twentieth century?

A classic example of importing doctrine is not-so-secret now and the answers lie with the diplomats and generals who were power brokers in Islamabad, Kabul, Riyadh and Langley, VA at that time.

Kamal Azfar, a Pakistani writer, states the dilemma in words:

“There are two concepts of Pakistan: the first empirical and the second utopian. The empirical concept is based on solid foundations of history and geography while the utopian concept is based on shifting sands. Utopia is not an oasis but a mirage… Samarqand and Bukhara and the splendors of the Arab world are closely related to us but we do not possess them. Our possessions are Mohenjo Daro and Sehwan Sharif, Taxila and Lahore, Multan and the Khyber. We should own up to all that is present here in the Indus Valley and cease to long for realities not our own for that is false-consciousness.”

To conclude, I will take liberty to speak for the third generation, who has the privilege to breathe in the air of this still-not-so-pure-land and is Pakistani now.

I’m not going to mourn the Indus Valley civilization, but what is the substitute they offer me if it is not desert?

The bitter reality is that I don’t have a clue of half of indigenous literature that has been written in Persian.

I have nothing whatsoever against religion, but how would they justify the attacks on the shrines of my land?

I’m all for endorsing their policies, but what is the vindication they have of myriads of dead bodies of my country-fellows?

I’m ready to relinquish Khusro, Ghalib, Bhittai, Bullah, Rahman Baba and Gul Khan, but can they introduce me to an equivalent of this stature?

I shall not question them, but will they care to tell me, ‘who am I’?