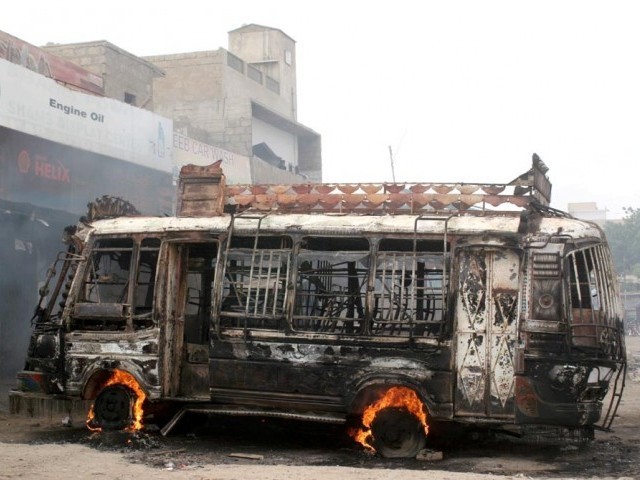 Saving Pakistan is more important than saving a sham democracy. Nowhere are the cracks more visible, than in Karachi. PHOTO: MOHAMMAD NOMAN/EXPRESS

Nothing exasperates me more than reading literature bashing Pakistan, so let me spare us all that twinge and cut to the chase. Things are not well. Aside from the terrorism, obvious over stated lack of electricity, gas and employment, the city of Karachi has become an open battlefield.

The nature of this situation is very disturbing. Not only has the violence been continuing without signs of subsiding, it is getting worse. The police has been ineffective, and the government of Sindh likewise. In fact, such is the level of helplessness of the think tank of our leadership, that the army has offered its services. However, what really raises eyebrows sharply is that the three major parties in Sindh all agree that dialogue between themselves would stop the violence. This can only mean one thing, and sadly, it comes as no surprise – militant wings of these parties are at the center of the violence and killings in Karachi.

Politics in Pakistan is in a very dark place, where power takes precedence. Things like human life and so on come after. Just for power and political might, parties have created militant wings, given their workers weapons, essentially using terror to gain superiority and incite fear. When your police force is politicized and target killings are conducted by associations of your own political components then it becomes theoretically, morally and practically impossible for you to ‘fix’ such a situation. Karachi is an ethnic and political war zone and it is inconceivable that the current leadership will solve anything. The army is not trained for operations in civilian territory but the majority of us Pakistanis see it as the only choice.

The only way to restore law and order in Karachi is to have a new governor who is not associated with the PPP, ANP or MQM. The present coalition government, in my opinion, should resign for proving to be a complete and utter failure in regard to peace in Karachi.

During the England riots David Cameron and majority of other government and opposition leaders of the United Kingdom cancelled their vacations to return to the territory to have a debate on the situation. Five days later 3,100 people were arrested and 1,000 have been charged with courts working on extended hours. But most importantly, peace was restored. In Pakistan the leadership has no solution, opposition members are touring Saudi Arabia, other parties are part of the violence and no one is willing to resign because they feel the need to protect democracy.

The people’s vote is not a show of power, it is a responsibility. If you can’t fulfill it, step down. This so called democracy was the result of 45% bogus voting, openly defying the Supreme Court’s orders time and time again and still somehow claims to be democratic and ‘saving’ democracy. This is a simple contradiction, but when your degrees are fake, your knowledge and analytical skills tend to be a little shy.

The way I see it, Karachi needs a new governor who is trusted and free of any militant wings. The police force must be depoliticized and then given the go ahead to make arrests. Once the militants have no shelter from parties or police, they become exposed and can be brought to justice. I’m no expert on these operations, but I know that you can’t arrest those whom you protect, so this government absolutely must resign.

I often get into arguments when I call for the resignation of the government. People tell me that it is not the PM or interior minister’s job to provide peace and security, but it is the duty of law enforcement. That is absurd. A primary duty of those who ‘govern’ us is to safeguard our lives and properties. Law enforcement agencies are under their command and work on their orders. If I feel the government is incapable of protecting me, and furthermore, is involved in violence of this kind, I am entitled to ask for them to step down.

As for advocates of democracy who worship the system, it’s time to wake up. This is no democracy, it’s an excuse. Nothing about this democracy is democratic, and the government’s performance has been so miserable that people say they actually preferred the time of the dictator they succeeded.

Every passing day more people are tortured and killed brutally. The truth is that this is target killing done to make statements in an ethnic and political war. The longer things in our country’s administration stay the same, the worse things will get, and we might have no choice but to call in the army, and then there will be more blood and hate than we could ever imagine.

You can always back the army, but for me, peace needs to always be given a chance.