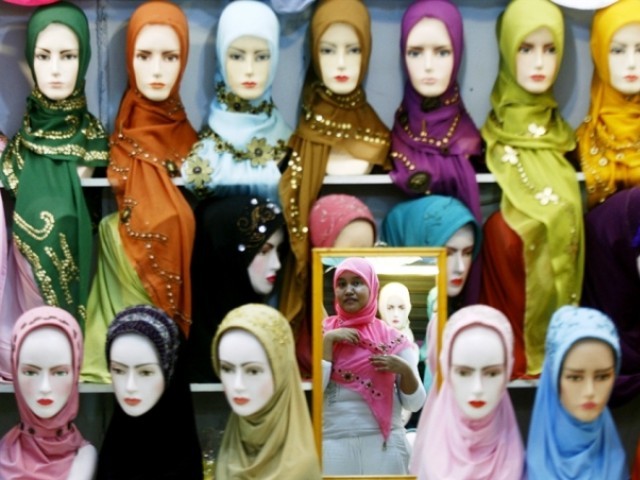 The newfound piety of morning show hosts and other television anchors during Ramazan is annoying, to say the least. Why have female anchors started covering their heads in the ‘spirit of the holy month’?

Considering that many of these hosts only gingerly place veils on their heads (probably to prevent their backcombed hairdos from getting ruined), this effort at modesty appears rather contrived. Also, why have singers and entertainers suddenly transformed into naat khwaans, who solemnly give spiritual advice and efficiently relay religious maxims?

I fail to understand why Ramazan must precipitate such ostensible religiosity on Urdu television every year. The holy month appears to be nothing more than a transitory phase for the most unlikely of television personalities to don dupattas, sing naats and flaunt their religious knowledge, before they all switch back to their ‘normal’ mode. My question is: why can’t they all just be themselves during Ramazan. Why the utter pretension of sanctimony for 30 days?

The simple answer is because we, consciously or otherwise, want to see them that way.

Being ‘holy’ sells during Ramazan; hence the rapid rise in the Islamic brigade’s membership during the month.

We love hypocrites simply because they are easier for us to idolize. Living up to our notorious tendency to spawn personality cults, we prefer charlatans, who epitomise our benchmark for appropriate behavior, over real people.

Let’s just face the discomfiting truth; the reason why an impostor like Aamir Liaquat, was able to rake in millions as a religious scholar, a religious channel’s executive, and an endorser for cooking oil, was because the public foolishly believed in his authenticity.

When I saw the ‘aalim’s’ viral video, I felt redeemed because as I had suspected all along, he was a normal guy, who swore, snickered, watched Hindi movies and acted for a living.  The video revealed a person far more credible than his TV persona of a perfect scholar uttering ahadith from memory in his melodious Arabic accent. The disingenuous ‘Doctor’ was able to deceive the masses because they were enamored with the idea of a ‘scholar’ who appeared to emulate the perfection of religious figures in history.

It is clear that people, sans pretention, are not “sellable” on TV and hence our anchors have turned into actors, to appeal to Pakistani audiences. Surely, the dupattas will come off and naats will be a thing of the past for most TV personalities when Ramazan wraps up. Yet the hypocrisy in television, with our active endorsement, will remain.

A journalist working for The Express Tribune. She can be reached on twitter at @MariaWaqar

Why firing Maya Khan is not the solution