In a bubble: Away from Lyari 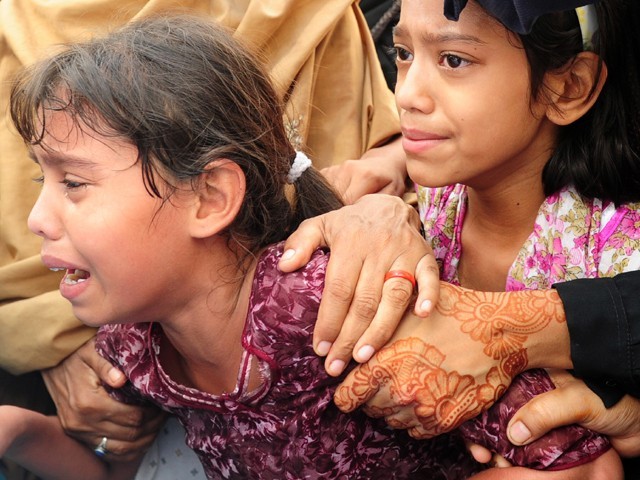 Children mourn during a funeral procession of a man shot and killed by unidentified armed men in Karachi on July 8, 2011. PHOTO: AFP

This morning, I was woken by a text message from a friend. “Don’t go to work today,” she wrote. The message said:

“Apparently there are a lot of target killings going on, 23 bodies have been recovered. Haalat seem bad, stay home today.”

I barely thought anything of it. Haalat are bad everyday and I can’t stop working because of thua. In classic uptown Pakistani fashion, the only thing on my mind was “the odds of something happening to me are a million to one”.

It seemed the odds were indeed stacked in my favour. I reached my internship safely – as if nothing was wrong at all. Another intern was already there, but the accountant whose office I occupy, and whom I have developed immense respect for over the course of my internship, wasn’t. This struck me as odd, since he was scarcely late or absent. I pushed the matter out of my head.

I thought to myself:

“No, just because he’s Baloch doesn’t mean something happened to him. He’ll be totally fine.”

And sure enough, he walked through the door at 10 am, without a scratch on him and greeted us.

He agreed, and remained quiet. Then, as if he was waiting for someone to reach out, he began to talk. He spoke of violence in his area, in Lyari. He spoke of frustration with gangs and their disregard for human life. Then, he told me seven of his friends left for Zainab Market the day before yesterday. Only two returned. The other fives bodies were found this morning, mutilated. He had tears in his eyes by the time he was finished; eyes that could have been ripped out had he accompanied his friends.

Shock tore through me.

I wanted to offer a word of condolence, but I was speechless. I wanted to console him, but all that I could think was how close the violence was. If we are separated from every human being on the planet by six degrees, then this inhumanity was just two degrees away- closer to me than I could have ever imagined. For those few minutes, I knew what it was like to be assaulted by a barrage of emotions, and thoughts concerning the well-being of a fellow human being, a Pakistani, something that we all seem desensitized to – something I would never want anyone to endure.

Is this what Karachi has been reduced to?

This past summer has seen the worst spate of violence that I can remember, save for the May 12th rampage. Day after day, the body count racks up, and we are helpless witnesses to it. A ticker tape counter runs at the bottom of every news channel, regardless of what is being broadcast, showcasing the stark dichotomy that we, as Pakistanis and Karachiites, have come to accept as life. Ethnic violence, religious violence, caste, creed and colour are no longer matters of pride it seems but an inadvertent contract on all our heads. All that is needed is an excuse, a gun and a whole lot of innocent people.

This is not a plea to the government to take action.

Nor is this is not a call to the youth to do something for their nation.

This is not even a self-righteous claim to have done ‘my share’ for the country.

This is the frustrated, upset rant of a deeply saddened Pakistani.

This is a helpless article written by a young dissatisfied affluent Pakistani- which is all we can do.

All we ‘average’ Pakistanis can do is turn to our laptops, our PC’s, and our smartphones and vent our feelings. We may be the only ones in this nation who want to do something for it with a complete lack of self-interest; give the nation back a portion of what it has given us. But we are helpless. Our country, and this city deserve better than this: something befitting the resilience that this nation is capable of displaying in times of hardship.

When I reached home after my internship, I stepped out of my car. A slight, cool breeze was blowing, filling my ears with the sound of swaying leaves, slightly masked by the noise of the traffic outside. The sun wasn’t that hot; it was actually quite pleasant. It was a quintessential Karachi day, just begging to be enjoyed with a trip to the beach or maybe lunch with friends. But beyond this I knew something darker lurked, cold and unforgiving, much like a cancer- the life that millions of Karachiites lead everyday without any respite. Something needs to be done before this cancer kills this city from the inside. Otherwise, as our elders say, “Allah hi hafiz hai”

An Electronic Engineering student at the University of Warwick.