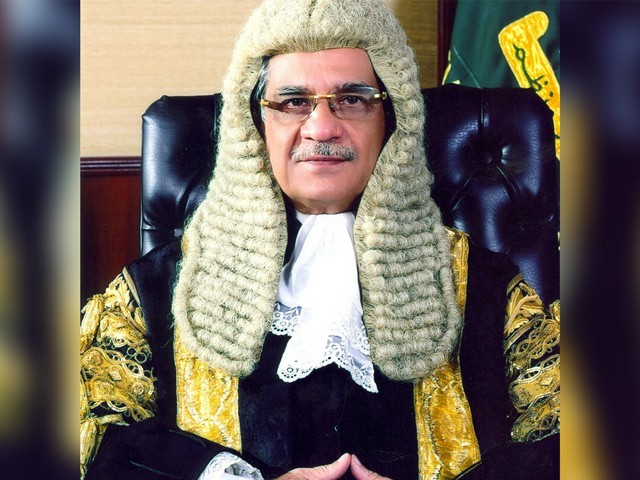 Most of Chief Justice Saqib Nisar's rulings have made him a hero in the eyes of the masses. PHOTO: FILE

Sylvester Stallone is a great actor, especially after he’s had a few punches to his jaw. If you were a kid growing up in the 80s, Stallone and Arnold Schwarzenegger were the primary Hollywood heroes giving young men around the world bodybuilding goals. It was, of course, better to watch them than the flogging of criminals on national television during the Ziaul Haq era.

One particularly provocative Stallone film which turned out to be a cult classic over the years was Judge Dredd. The idea that a police officer had the authority to carry out justice on the streets – as he deemed fit in accordance with the law – was controversial at the time. The writers probably had no idea this would become a phenomenon in certain parts of the world, going by the name of ‘encounter’ (pronounced In Konter on the streets) or extrajudicial killings.

The parallel might be a little off but we can, ever so slightly, relate this to the judicial activism born in Pakistan during the end of the Musharraf era. With Iftikhar Chaudhry at the helm and the Provisional Constitutional Order (PCO) as the prevalent issue, the judicial machinery had found a worthy cause. All the courts, judges and the lawyers chipped in. Thus was born a Judge Dredd style rule of law: if the government won’t fix it, a suo motu will.

It would not be an exaggeration to state that every chief justice of Pakistan (CJP) since Chaudhry has been involved in judicial activism in one form or the other. However, we have never had this penetrative level of government scrutiny at the hands of the judiciary, as seen over the last two years.

If I am to trace back the accolades of current CJP Mian Saqib Nisar, whom we can safely address as Pakistan’s Person of the Year, we will have to go back to 2017 and the Panama Papers case. No one could have predicted that Nawaz Sharif would lose his political position due to a corruption case broken by a foreign journalist. At one time, Pakistan was immune to such scandals, but those days are long gone.

The joint investigation team (JIT) formed by the initial Supreme Court verdict found enough irregularities to disqualify and imprison Nawaz, his daughter Maryam Safdar and son-in-law Captain (retd) Mohammad Safdar. I wish I could conclude this paragraph by saying this marked the end of their political careers, but as a noted politician once personally told me,

“A (Pakistani) politician’s career is never over, especially after going to jail.”

Seems like it’s a rite of passage only those in the know truly understand.

This year, CJP Nisar’s perseverance in pursuing political cases continued as he courted cases against several other politicians, such as Prime Minister’s Special Assistant Zulfiqar Abbas Bukhari. His persistence in prosecuting Bukhari for his dual nationality, going as far as to defy the “tabdeeli” Prime Minister Imran Khan himself, is really admirable. In the latest hearing, he went on to say that,

“If appointments are made on the basis of nepotism, then the court will interfere.”

This has got to burn PM Imran. Meanwhile the CJP also needs to understand that nepotism has almost always been a way of life in Pakistan’s civil-bureaucratic universe (the CBU, much like the MCU and DCEU), but he probably has ‘promises to keep and miles to go before he sleeps’.

The CJP’s public profile received thousands of more likes when he tackled a few civil cases that had come into the limelight due to their complexity, be it political or legal, such as the Shahrukh Jatoi and Amal Umer cases. However, perhaps the most important and popular step taken by the CJP is the dam-building initiative and the start of a dam fund in his own name.

While most of his rulings have made him a hero in the eyes of the masses, some haven’t gone down so well. The Supreme Court decision on the encroachments in Karachi led to furore amongst the masses. The key factor here was not only the strictness of the decision but rather the severity of the action taken by the civil authorities in Karachi. Perhaps the mayor and his political party finally decided to work and do something they were ‘told’ to do. The overzealousness with which this destruction took place saw the demolition of people’s homes as well as businesses.

From a moral point of view, it could be argued that these people are at fault for doing something illegal in the first place. However, the execution of certain punishments requires a level of finesse which has unfortunately been missing here. Moreover, these actions are also leading to the loss of livelihoods and national gross domestic product (GDP). Please note that I am not using the word national exchequer, because a majority of the businesses that have been cleared out are part of the underground economy. No hard copy receipts and no tax filing – doesn’t mean they haven’t been paying their taxes and weekly bhattas.

Numerous political parties have been trying to protest against this, however, these voices are muffled and toothless given the premise that nobody, and I mean nobody, at this point in time wants to stand in contempt of court.

Personally speaking, the CJP’s crowning achievement was the Aasia Bibi case. Of particular note was the utter disregard to personal safety that the judicial panel had to endure in order to make a free and fair ruling on the case. It was a happy day that an innocent person was not condemned to death, and an even happier day when the miscreants were booked for troublemaking a week or so later. I don’t blame the people protesting on the roads for the chaos, however, I certainly do hold the leaders of these protests responsible for inciting violence.

Anyone with a little understanding of religion would appreciate the importance of the judicial process when it comes to accusing someone of a crime, especially one as grave as blasphemy. There is no verdict without the presence of reliable witnesses and the verification of all testimonies given to the court. Therefore, the verdict should only represent what the evidence points towards. Unfortunately, people like Khadim Rizvi and thousands of zealots like him have become adept at manipulating the public and fomenting dissent against a non-existent enemy.

With a judicial process willing to tackle controversial issues and influential personalities, Pakistan’s judiciary has its heart in the right place. However, I am praying this does not lead to the formation of another elite and impeding status quo, which it normally does in Pakistan. We need the CJP to fix issues like these, but I do hope he also fosters more judges like himself who would finally be able to settle tougher cases such as illegal land grabs, illegal places of worship and politically entrenched corrupt behemoths like Mr 10%.

It’s a long way to go, but at least the direction is right.