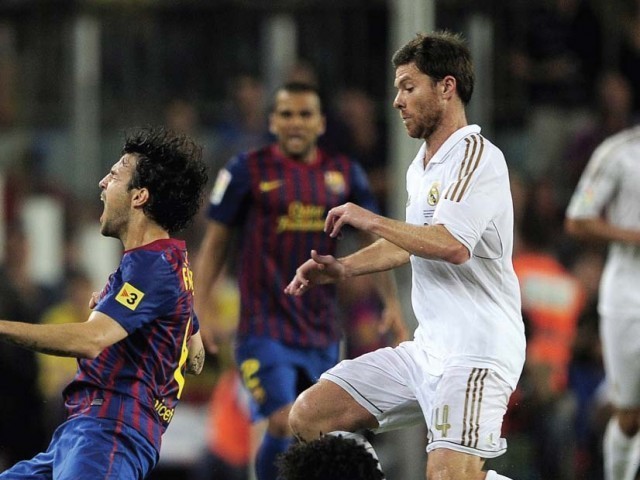 Watching Jose Mourinho coach this Real Madrid team is like watching a slow descent into madness, a football version of Apocalypse Now if you will.

Tuesday night was not much different, even though the Spanish Super Cup can be regarded as the equivalent of England’s Community Shield, generally thought of as a glorified pre-season game. However, this time round, these games were contested by bitter rivals: the Community Shield saw Manchester United clash with Manchester City but the atmosphere was nowhere near as explosive as what transpired at Camp Nou.

Focus not on football

Football became a sideshow, an act not witnessed often, and, as at his previous clubs, Mourinho was smack in the middle of it all. It was an exciting game, terribly exciting, with five goals and Leo Messi scoring a late winner as Barcelona ran out 3-2 winners (5-4 on aggregate).

Earlier, Cristiano Ronaldo had scored for the first time at Camp Nou – on his fifth visit – and was also his 100th goal in Madrid colours. It was also Cesc Fabregas’s competitive debut for Barcelona, the transfer from Arsenal to his boyhood club taking the acquiring the gravitas of a veritable Norse saga.

None of that mattered in the end though. What mattered was a thuggish encounter between the Madrid and Barcelona support staff with players from both sides participating in the ensuing melee.

The flashpoint was a completely frustrated Marcelo launching himself at Fabregas, a minute or so from time, which resulted in a red card for the Brazilian.

Both benches got involved with Gonzalo Higuain grabbing the throat of the Barcelona reserve goal-keeper Jose Pinto. At the end of the fracas, Mesut Ozil and David Villa received their marching orders too.

Not for the first time

It is disappointing to note that a number of encounters between these two sides have seen off- field shenanigans take over what should have been purely football spectacles.

Emotions boil over and frayed nerves lead to bad decisions in the heat of the latter stages of a league or cup run which is what last year’s indiscretions could be chalked down to.

But the 2011-12 season has kicked off, quite literally in this case, with another disgraceful incident. There are underlying tensions on both sides, and while Mourinho and Madrid have been the more visibly combative, we have seen sarcasm and scorn from Guardiola and Barcelona too.

This is just the start

None of this bodes well for football in Spain. It is beginning to look like Real Madrid will continue playing like a more skilled version of Stoke City whenever they play Barcelona because their manager is either too stubborn or apprehensive of allowing his players to express themselves freely, which leads to an exhibition of attrition, fouling, and high tempers.

There is a galaxy of stars on both sides and their skills should take centre stage. Instead its the senseless brawling where the crux of the matter lies. The ‘Special One’ has always liked the spotlight on himself, at times helping deflect criticism, deserved and undeserved, from his tactics.

At Madrid, there was never a danger of that happening, particularly with the superstars.  One cannot help but feel that Mourinho wants his time in the limelight and this time it is coming at the expense of his own team’s success.

The writer is an economist and a freelance columnist