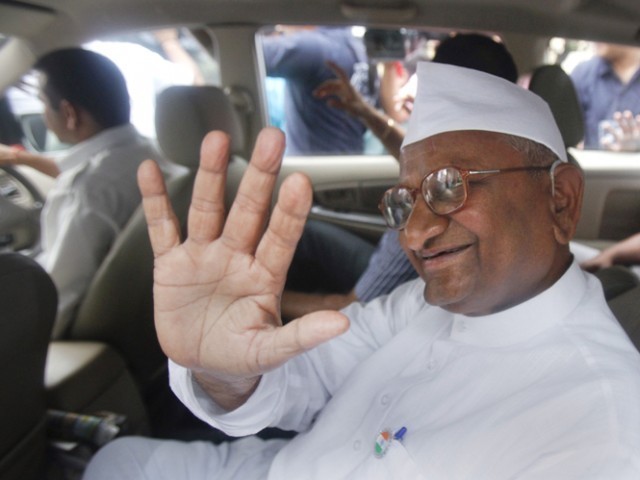 “Corruption and hypocrisy ought not to be inevitable products of democracy, as they undoubtedly are today.” PHOTO: REUTERS

Fasting in Pakistan is reserved for the month of Ramazan whereas in India, it has taken on the shape of a non-violent movement under the leadership of Anna Hazare.

Carrying on with the legacy that Mohandas Gandhi left behind, Anna aims to pressurise the Indian government to enact strong anti-corruption laws by issuing the threat of a fast unto death.

The “Gandhian” or the “crusader” as he has come to be known is a 74-year-old veteran who follows closely the words of Gandhi:

“Corruption and hypocrisy ought not to be inevitable products of democracy, as they undoubtedly are today.”

His successful attempts at coaxing the government in the past to yield into the drafting of a Lokpal Bill, has brought him in the limelight in India. And his infectious drive for democratic values has captured mass support from all corners of the country.

While we content ourselves with token hunger strikes, Anna practices an extreme form of social activism which has revolutionised the sphere of public influence on the state in India. Instead of chanting slogans outside the press club, venting out frustration by vandalising private property and observing strikes to halt economic hubs, Anna and his supporters choose to inflict harm upon themselves to subvert democracy which has fallen prey to corruption – a civil society move which has evolved to display maturity.

It requires only one man to change the face of politics in a country, a single selfless move to denounce all forms of injustice and a steely will to overcome all forms of hurdles. At this point I ask myself: could a symbol of morality force the government to revisit its policies and put an end to corrupt practices in Pakistan? Where plundering the state treasury has become a common practice observed by all successive governments, need I mention the NICL scam which has jolted the fundamental pillars of democracy in this country, does this style of agitation stand to succeed?

Although this idea might appeal to all patriots, I must send out a warning signal: when the weathered look on the faces of flood victims cannot muster significant reaction from our government, I presume, it is after all but a risk to announce a hunger strike.