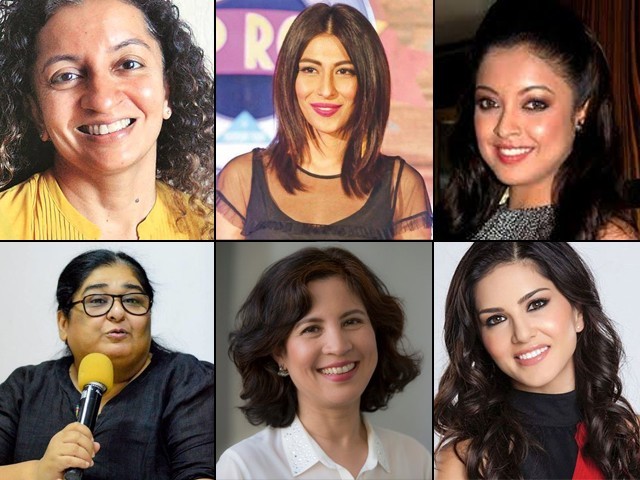 There have been plenty of aspersions cast on the movement and its motives.

It is the defining moment of the year gone by, not because it finally became part of a global movement but more so because it took a second wind to unsettle the dominant voices of patriarchal corridors and send a message that #Metoo was not about some misguided and delayed wave for justice, just as it was never about a woman in the wrong job at the wrong time. All it had ever been about was consent.

October 2018 will be remembered as the renaissance of the #MeToo movement in India. A forgotten actress Tanushree Dutta touched down from the shores of the US and took on a veteran actor who wins critical acclaim for most of his roles, but will likely not win any plaudits for his character. Dutta’s accusations were predictably met by resistance; a motley band of brothers across social media and drawing rooms came together to keep a check on a narrative that was threatening to slip out of their centuries-old grasp. In societies of the subcontinent, the woman has to bear the shame and accept that it is ‘normal’ for her to be shamed. It is her stigma alone to bear. This is how things have always been in this part of the subcontinent.

The resurgence that followed was like a dam waiting to burst. Bollywood directors, media personalities, the CEO of the cricket board and even artists, all came out of the woodwork. The most prominent name to fall was that of minister and former editor of the newspaper Asian Age, MJ Akbar. At least 20 women accused the politician of sexually misbehaving with them, the strongest allegation that of rape. The first ever woman to accuse the editor turned politician of sexual assault took to Twitter to say:

Akbar denied these accusations and instead filed a defamation case against Ramnani. After countless other women came forward, the minister was eventually forced to resign, but resurfaced only a few weeks later as a columnist in a prominent Indian newspaper.

These events would have been watched with keen interest across the border because if nothing else, the fight for gender equality remains a grievance common to both countries. Predatory male behavior is not unique to either of our countries. Decades of conditioning forbids even the educated middle class in both countries to speak out. Families remain wary about being a subject of society’s ridicule, a reason why many new accusations this year were made anonymously. What helped the movement gather momentum in India and to a lesser but equally determined extent in Pakistan was the intent. The voices may have been just a fraction of our submissive and subjugated populations, but the sheer determination present in these voices managed to challenge conventional thinking and upbringing. The message was clear: the powerful cannot always get away.

Many would argue that in societies like ours, change should not start from urban English-speaking cities but at the grass root level because this is where the sense of male entitlement is at its blusterous best. It is here that any male misbehavior is simply dismissed as a momentary deviation. Speaking out against any injustice or inequality for women who have seen honour killings and forced marriages is almost impossible, even today. In poor homes in rural areas, a boy is still considered the only bread winner of the family: someone who can carry the family legacy forward. A Malala, on the other hand, is only born once.

To say, however, that upper class societies in India and Pakistan have overcome this gender imbalance is a fallacy. When these names started to be revealed slowly and gradually sometime last year, many amongst the educated classes remained in denial, refusing to even accept the enormity of the step taken by the victims by coming forward. Lead by example took a whole different meaning in Pakistan when Prime Minister Imran Khan said rather bizarrely that feminism had degraded motherhood. This comment was met with instant social media backlash as people took to Twitter to express their disdain of his opinion:

Imran Khan's views on feminism show his utter lack of understanding of the issue. He should ensure he is better briefed or not speak on issues he has little knowledge and awareness of.

The feminism movement in the West has 'degraded' the role of a mother Imran Khan? Really?! #PTI pic.twitter.com/UwIpEeADil

Across the border, folks on Twitter thought they were amusing and funny when they speculated if actress Sunny Leone would also claim that she was assaulted. What wasn’t comfortable degenerated into a farce. The same people relentlessly questioned the timing of the revelations, not comprehending or perhaps choosing not to that for some it may take a month to gather their courage to go public, while for others, it could be as long as 10 years. The choice was theirs. The flag-bearers of this movement thus fought not only personal demons but also a society that has seldom given women the support to speak out by long upholding the notion that no ‘respectable’ woman would ever speak out publicly on such matters and issues such as these should remain confined within the four walls of their homes.

There have been plenty of aspersions cast on the movement and its motives. Among others, it has been ridiculed as a social media phenomenon. There will always be people critical of the movement, but no one can deny that it has given a voice to those who perhaps had no other way of taking on the rich and the famous.

Some victims have agreed to testify in court but our judicial system has not really been a deterrent when it comes to crimes against women. Producer Vinta Nanda says the onus is now on her to prove that Alok Nath, the sanskari (traditional) father figure in countless Bollywood movies is guilty of raping her. Nineteen years later, she is expected to go through medical tests.

So often, cases go on for years and justice becomes too little, too late. There is a reason that rapes in the country are increasingly manifold and violent incidents are becoming more audacious by the day. Ironically, police stations on either side of the border are the last bastion for a woman to feel protected.

Just how unwilling a common person is to help any of the courageous women who dared to come forward can be gauged from the trail of victim-shaming that routinely follows such accusations. Sometimes, women are their own worst enemy. In our countries, a wife is conditioned to defend her husband no matter what. For example, despite the serious allegations against MJ Akbar, his wife stood vocally behind him questioning instead the motives of those accusing her husband. When Pallavi Gogoi and Tushita Patel (two of the 20 women who accused him of assault) spoke out, his wife publicly humiliated the women who had spoken up by saying that “neither of the women carried the haunted look of victims of sexual assault”.

Sharing this because I believe that by speaking out about my own experience of sexual harassment, I will break the culture of silence that permeates through our society. It is not easy to speak out.. but it is harder to stay silent. My conscience will not allow it anymore #MeToo pic.twitter.com/iwex7e1NLZ

Instead of the people of Pakistan sympathising with her, she was severely abused.

Ali is handsome and famous across border….wrong accusation….

It is hard for people living in such environments to understand that women have no sweeping intention to malign a gender. This is just a long overdue battle for rights and a little fear can go a long way.

So what changed this year? The sisterhood of victims stood tall, encouraging many others to give a voice to their darkest secrets. Closure means different things to different victims. For some it’s just an apology; for others, nothing short of justice. Either way it’s a victory. Vinta Nanda whose confessions shocked the country summed this up:

“Don’t hold yourself back. This is a moment for change so silence will only hold barriers to its evolution. Speak out. Shout out from the top of the roof.”

These words may have been a long time coming and the road ahead may still be far from smooth, but the fight has only just begun. Perhaps it is safe to say that 2018 has ended on a more positive note than it began as far as issues of harassment are concerned. So long as women continue to at least believe other women and are willing to support them, the new year may just bring renewed promise and hope for the women of the subcontinent who will no longer be ‘becharis’ (helpless) but will find themselves strong enough to speak out against any injustices done to their bodies and selves.